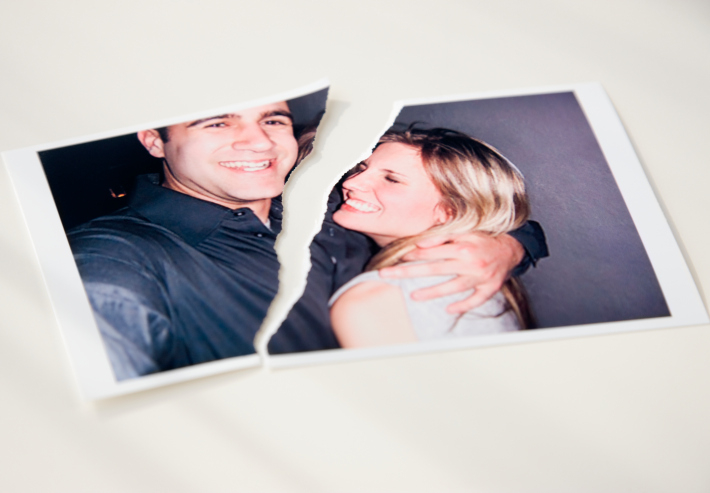 You’re on your way to your local watering hole one evening and you spot something familiar in the gait, the walk, the hand gestures of a person heading your way on the street. You realize with sudden, sinking dread that it’s your ex who you haven’t seen since the big breakup. You grab your best friend’s elbow and hiss in her ear, “That’s him.” You stay in place, paralyzed and unable to move, until she grabs you by the back of the arm and steers you across the street. You think yourself invisible while you stand in between two parked cars, waiting for him to pass.

Later, when you get a text that says, “Did I just see you outside that bar?” you wait two hours and numerous drinks before texting back in all caps “NOPE.” Near the end of the night, as you sit on top of a bar stool with your best friend like imperious, drunk queens, you blatantly ignore him when he enters the bar to retrieve his forgotten credit card. Likely story. Even with his sudden ambush, you manage to avoid contact. At the end of the night you collapse into bed with a glass of water in hand, and think to yourself, Crisis averted!

But really, was it?

Breakups, regardless of how mutual and friendly they may be, trigger a crazy animal response mechanism that may cause sane people to behave like lunatics. The world is small, and if you live in the same city, the likelihood is high that you will inevitably run into someone you dated, and the first time it happens will be the worst. Read on for 6 graceful ways to handle a run-in with an ex.

1. Don’t present yourself as a viable option for ex sex.
Breakups are weird because you go from spending large quantities of time with someone for an extended period of time, and then, after a single decision, you’re done. That time is erased. The contents of your shared life, however, don’t disappear completely the moment you break up. They live in the ether of the internet, or your apartment, or that text message string you’re loathe to delete. Breakups also leave you vulnerable, and the temptation to succumb to the wiles of someone you’ve been with before is very real. Do your best to avoid it.

2. If you do sleep with them, don’t beat yourself up.
Hey, it’s okay! We all do things that feel right at the time and place, but in the morning feel very wrong. This is when it’s important not to give into the gargoyles in your head, shrieking at you for taking a misstep. The reason you entered a relationship with this person in the first place is most likely the same reason that drove you to hop into bed with them again. Also, you might have been drunk. If so, that’s OK. Just pick yourself up and carry on.

3. Avoid deep conversations.
There’s no need to discuss anything major. Remember, this person has been out of your orbit, and if you’re still in the process of healing after the breakup, it’s better to keep the conversation short. Ask how they’re doing in that tone you reserve for your upstairs neighbor. Short, sweet and to the point.

4. Make no false attempts at extending the olive branch of friendship.
When people are in situations that make them uncomfortable, they tend to be overly friendly and effusive. Some tend to say things that they don’t really mean. Look at it this way — when you run into that girl you never really liked but hung out with a lot in college on the subway, you generally exit the conversation by awkwardly backing into a different part of the subway car and bleating, “Let’s get a drink soon,” knowing full well that you will never get that drink. Human beings do this because it is the nice thing to do, but I think it’s a lot nicer not to say things you mean. Don’t offer to get coffee, don’t say you should catch up over a drink unless you really, really mean it.

MORE: Does It Matter What You Order on a Date? Here’s What Guys Think

5. Leave the past where it belongs.
The first time you see your ex is definitely not the time to dredge up the argument that ended your relationship, or the thing that you’ve been holding onto for however many weeks or months it’s been. Even if you’ve been stewing over a clutch of unresolved issues and you’re dying to unload, do yourself a favor and hold your fire. Getting into an argument about the past is like eating an entire package of Oreos in one sitting — each cookie is better than the next, but halfway through you’re bleary-eyed and nauseous, unsure of how you got there in the first place. Avoid this feeling by keeping those skeletons in the closet

6. Part on cordial terms.
Leave with a smile. No one’s saying you have to hug or kiss, or touch in any way. Just leave politely, like the adult you are. Say goodbye and be proud. You survived.

More on The Frisky:
How To Be Friends With An Ex After A Really Bad Breakup
8 Tips To Avoid Contacting Your Ex This Holiday Season
How To Divvy Stuff Up After A Breakup