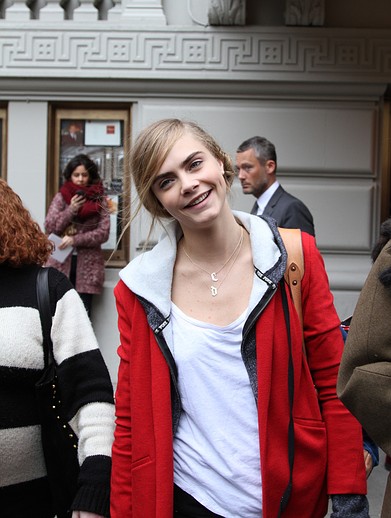 Being under close scrutiny is a given when you’re constantly in the public eye, especially when you’re a well-connected, successful, stylish 20-year-old British supermodel. We’re talking, of course, about Cara Delevingne, who may have landed herself in a bit of hot water due to the release of some potentially incriminating photos.

Over the weekend, British tabloid the Sun ran images of the 20-year-old mega model with what appears to be a baggie of cocaine. According to the tabloid, a small sachet fell out of the supermodel’s handbag when she was searching for her keys outside her West London home.

“She was really giggly. She found it hilarious but her friend was really edgy about it,” said a photographer who snapped pics of the incident. “Suddenly Cara dropped something and bent over to pick it up. Very discreetly, she just put her foot on it and then rolled her handbag across so it looked like she was just kind of bending over. The friend kept saying, ‘Can you stop taking pictures?’ The friend definitely realized they were in trouble once that little packet had dropped on the ground.”

As of now, nothing has been confirmed yet (it is a British tabloid, after all) but we can’t help but wonder how, if the allegations are true, this might affect Cara’s personal brand, which has skyrocketed during the last year.

Labels affiliated with the model are already responding to the unconfirmed drug allegations, as a spokesperson for H&M—which hired Cara to front its Divided campaign—told the Daily Mail that the Swedish mega-retailer plans to investigate whether the model violated its zero-tolerance drug policy and, if so, take action.

Cara’s also bagged other high-profile campaigns this year such as Burberry and DKNY, as well as appeared on hundreds on International runways during fashion week and for Victoria’s Secret. Not to mention, she covered the inaugural issue of Miss Vogue, Vogue U.K.’s offshoot directed at teen girls last week.

To find out how an alleged drug scandal might impact Delevingne’s modeling career, we asked Kristi McCormick, a casting director and founder of agency Matchbook Company, to offer some general insight.

StyleCaster: If this story turns out to be true and it was cocaine, how can this hurt Cara’s brand? Or will it?
Kristi McCormick: I can only equate Cara’s current events to Kate Moss‘ cocaine photos in 2005. Kate was photographed with cocaine at a party, however, she wasn’t charged with possession as the photo was blurry. Moss was already an iconic fashion model when this incident took place and she was a mother [so] I thought this discovery would ruin her career but she came back bigger than ever.

Donna Karan used [Kate] for its big Fall campaign that year, and others soon forgave and forgot, and put her on magazine covers and casted her in ad campaigns again. The few advertisers who [dropped] her in 2005, came back later and used her anyway.

Do you think Cara’s career could be more easily “ruined” than Kate, considering Kate was so established at the time?
The international press won’t make this cover news, so the incident will come and go. As long as Cara stays clean and out of the press in a negative way, her sponsors/advertisers will still use her.

What’s the best way for Cara and her camp to handle the situation, should it be proven true?
Cara should make a public apology—own up to what she got caught doing if it’s true. She should make a concerted effort to give back to the community and write an article or blog post addressed to  young girls and all her fans who  look up to her. The press love a “sorry story,” and Cara’s personal apology will go global in a matter of minutes.