With news of their recent split, it looks like Bradley Cooper and Irina Shayk have a co-parenting plan for their 2-year-old daughter, Lea De Seine. While rumors have been swirling about to the cause of the breakup (with many unfairly pointing the finger at Cooper’s A Star Is Born co-star, Lady Gaga) Cooper and Shayk have the priorities in place when it comes to their child.

A source told E! News that the couple wants to remain amicable for the sake of their daughter. “They both want what’s best for their daughter and so far things are amicable,” the source said. “They’re working out custody details and putting everything in writing so there’s no confusion,” the source shared. But while the finite details of custody are being agreed upon, both parents are taking the time they need to make the transition as seamless as possible.”

While Shayk has been taking some time for herself on vacation in Iceland, Cooper has been spending time with their little Lea. It was a daddy-daughter getaway. “While Irina has been out of town, and through the week when news broke of their split, Bradley and his daughter Lea spent the weekend at a house up in Big Bear,” the source shared. 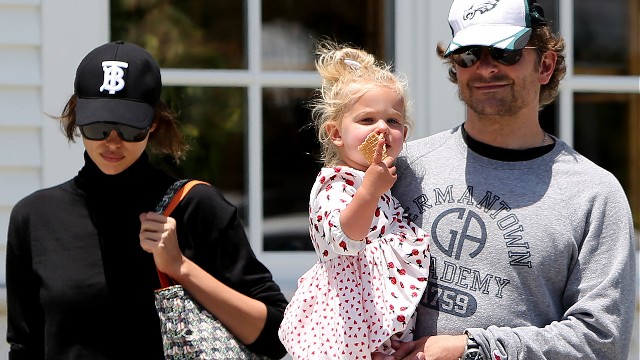 The insider continued to paint a tranquil picture for father and daughter to bonding time away from cameras. “It was just Bradley and Lea. It’s very peaceful and serene up where they stayed, and Bradley was really relaxed and seemed like he was in a good mood even with everything going on,” the source said.

Cooper and Shayk were in a relationship for four years before their split. After spending some time apart to test the waters, it became clear that what they once had simply wasn’t there anymore. While it’s difficult to see the couple go their separate ways, one element that will forever remain between the pair is their love for their daughter. “They love their little girl dearly and that’s not going to change no matter what,” the same source shared. “They want what’s least disruptive for their baby, [and] would like to keep things as consistent as possible for her.”