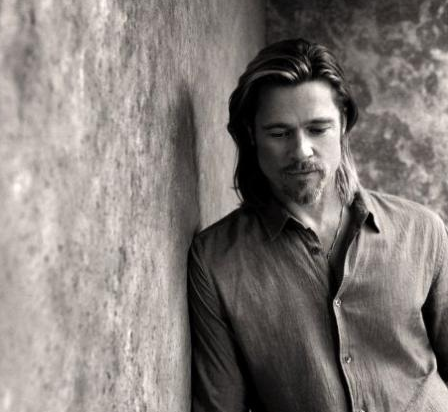 Brad Pitt is at it again, making not-so-subtle comments about how unhappy he was during his highly publicized five year-marriage to Jennifer Aniston.

The 49-year-old actor and father of six (with fiancée Angelina Jolie) decided to spill to Esquire about the seemingly dark days prior to meeting Jolie on the set of the 2005 flick “Mr. & Mrs. Smith”—something he seems to do a lot of lately.

“For a long time I thought I did too much damage—drug damage. I was a bit of a drifter. A guy who felt he grew up in something of a vacuum and wanted to see things, wanted to be inspired,” he said. “I spent years f—ing off. But then I got burnt out and felt that I was wasting my opportunity. It was a conscious change. This was about a decade ago. It was an epiphany.”

Obviously, he doesn’t directly state Aniston’s name—but this isn’t the first time he’s called attention to wasting his time and potential during their marriage, plus “the decade ago” he mentions was around the time he met Jolie in 2003.

In the September 2011 issue of Parade, Pitt stated that he was finally satisfied thanks to Jolie, and prior to that, he’d been in a drug-fueled haze with Aniston.

“I spent the ‘90s trying to hide out, trying to duck the full celebrity cacophony. I started to get sick of myself sitting on a couch, holding a joint, hiding out. It started feeling pathetic. It became very clear to me that I was intent on trying to find a movie about an interesting life, but I wasn’t living an interesting life myself,” he said. “I think that my marriage [to Aniston] had something to do with it. Trying to pretend the marriage was something that it wasn’t.”

Needless to say, Brad’s comments about America’s Sweetheart caused quite the stir—to the point where Pitt actually issued an apology for the firestorm—but he still seems hell-bent on letting us know he was really, really unhappy during that time. To be fair, we aren’t saying he’s not allowed to talk about how content he is now, but he knows damn well how these types of “I was so pathetic before” statements will be construed.

The former couple have spoken about each other in the media for years now, with Aniston saying that Pitt lacked a “sensitivity chip” when he posed for a steamy W shoot with Jolie months after they were officially divorced. She also commented about Brad’s bleached blonde hair, quipping, “Billy Idol called. He wants his look back.”

Jolie, for her part, has mostly kept mum but did famously state that she “couldn’t wait” to get to set while shooting “Mr. & Mrs. Smith.”

What do you think of Brad’s latest comments—should he just shut up or are they totally justified?