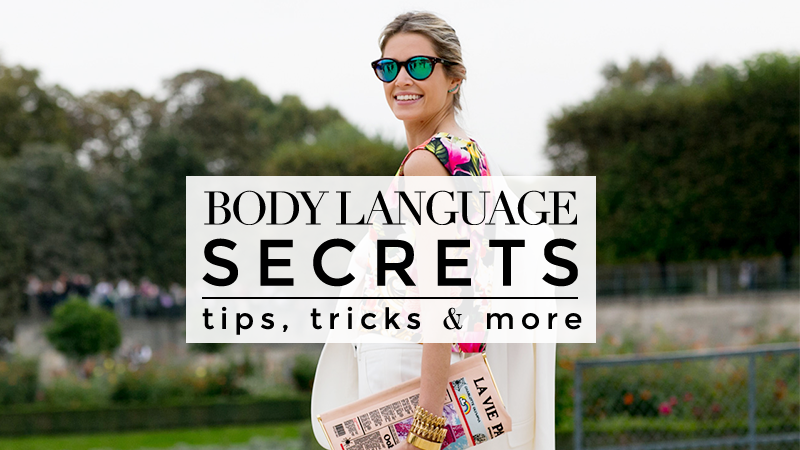 Don’t stand with your arms crossed, don’t touch your face, don’t break eye contact—when it comes to body language, we’ve all memorized these words of wisdom.

Whether you’re embarking on a first date, going on an interview to land that dream job, or being forced to deal with your fear of public speaking at work, body language is an incredibly important factor in your success—or lack thereof. And according to body language expert Blake Eastman, the founder of Manhattan-based research and teaching organization the Nonverbal Group, not only are physical signals important, but on many levels, they’re even more impactful than the words we say.

“These little slices of how you interact with other people are a big deal in your day-to-day life,” Eastman says. “For example, your boss may not even realize it, but the whole reason they perceive you to be less valuable is because you’re expressing that you’re not confident.”

According to Eastman, most of the hackneyed body language tips we’ve come to know are completely bogus, because they’re so over-cited and over-used that they accomplish nothing but making you precisely what you don’t want to be: completely average.

On a standard bell curve of social awkwardness (which Eastman handily drew for us below), most commonplace body language tips will land you safely in the middle 68%: not terrible, but not exceptional.

“It’s okay to be safe, but being safe doesn’t get you the exceptional performance you want,” Eastman told us. “Most [body language] advice advocates things that are standard—don’t do this, don’t do that—but you’re just acting like everybody else. You want to stick out in some way.” 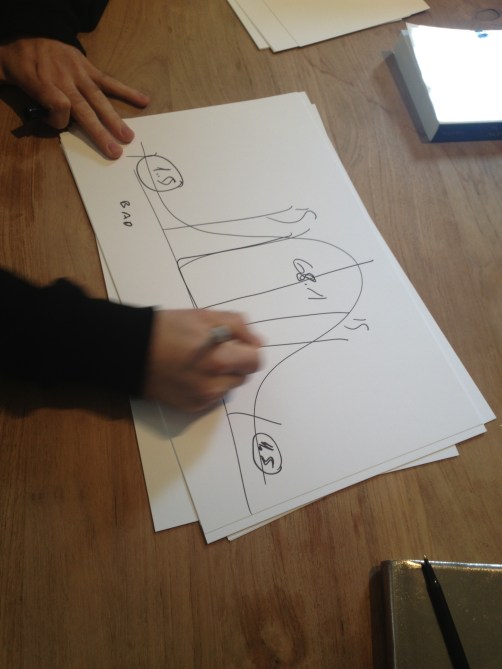 So, how is it possible to stand out in every important situation? Eastman sat down with us to talk about five major social scenarios we all encounter, and gave us the real scoop on how to be exceptionally successful—whether you’re meeting your significant other’s parents or hitting a bar looking to hook up. These aren’t your grandma’s nonverbal communicative tips, so read to learn how to effectively conquer the social stratosphere!

First thing’s first: the most important vibe to give off is awareness, both of yourself and of your partner. “The number one problem with dating advice is dating advice in itself, right? Three tips to change your behavior, etc.—it’s bullshit,” said Eastman. “It’s all about being adaptive and being really knowledgeable of what you’re giving off, and also knowledgeable of your partner. At the end of the day, the person that’s confident and mindful of their own behavior, and their date’s behavior, is going to be the best. That’s just that. That’s not a set of tips.”

However, being extremely plugged in to your date’s behavior is key. “If your partner sits down and seems really anxious, ask her what’s going on,” he continues. “And if she goes, ‘Oh, it’s something at work,’ then you can build a rapport. It’s all about being reactive to the individual.”

Eastman does admit, though, that a certain amount of anxiety on a first date is a good sign. But it’s problematic if the anxiety doesn’t fade away as the conversation progresses.

“You should see some anxiety on a first date,” he says. “But it shouldn’t ruin you for the most part. What you should see are nonverbal indications of anxiety—fidgeting, breaking eye contact, talking rapidly—and then they should slowly start to dissipate. And that shows that you’ve established comfort. But at the end of the date, if you’re still anxious, that’s not good.”

Eastman is also adamant that movement is an indicator of a great first date. “Movement is a great predictor of first date success,” he says. “Dates are all about having fun and having a good time, so you’ll tend to see that in good dates, people will move around a lot. From moving back and forth to smiling to facial movements and animation to gesturing—it’s a good thing, and you should start at date locations that induce movement.”

Which means you shouldn’t make dinner in a restaurant the sole activity of a first date. “It’s probably one of the worst first date places because it’s highly adversarial,” said Eastman, who recommends taking your date on a mini-tour to increase the chances of movement: hitting a bar, then having a bite, then going bowling.

Your level of success during a job interview is determined way before your interview actually begins, Eastman says. “I would be mindful of your body language before your interview and not during. So before the interview, some people are in interview rooms and are really stiff. And that’s a predictor of how they’re going to be during the interview,” he said. “The whole point is before to make sure you’re in a confident posture, and to make sure your thoughts before are positive. There’s no room for any kind of negative thoughts before an interview. Get rid of them.”

You can also pretty much throw out any of the old “rules” you know about how to conduct yourself during an interview, Eastman says. “The sole purpose of an interview is, of course, to convey your value and all that kind of stuff. But most importantly, you’re trying to build a connection between you and the person who’s hiring you. We hire based not on qualifications; we hire based on will we like the person and want to work with them. So, that’s your first task: trying to establish this relationship.”

“The old rule is to make perfect eye contact during an interview, but that’s bad advice,” he says. “When you talk to your best friend, what’s your eye contact like? It’s not 100%. It’s like 80 or 90%, or something of that nature. It you maintain eye contact the whole time, it doesn’t build an organic connection, because it’s fake.”

He also emphasizes that a confident posture is key, because ultimately, all people want what is hard to get. “It’s called justification of effort,” he explains. “If you seem like you’re so available, if you’re always available, it doesn’t work. The interview is just as important in terms of, you’re interviewing them, and you’re trying to figure out what their culture is like. They should be proving themselves to you, not the other way around. The most prestigious people out there don’t need that company; the company needs them. If you approach it like that, you should walk through the door and they go, holy shit, I like this guy/girl. Let me do what I can to get them. That’s the connection that’s never going to come if you’re stiff.”

And the best way to express that confidence is by not hesitating. “Confident people make decisions quickly,” he explains. “Movement should be A to B, not A1 to A2 to A3 to B. So when you walk into a room, you should walk into the room. When you shake someone’s hand, you should shake someone’s hand. If you see someone who lacks confidence, their movements are never A to B. They hesitate.”

It’s Friday night, and you and your friends have decided to hit the town on the search for some cute guys/gals. What’s the most surefire way to score points with the object of your desire? “Add value,” Eastman says.

“The orientation reflex is something we coach a lot. You want to orient yourself toward others and provide value,” he says.

“This piece of advice has created tons of relationships from my classes. It’s always about what you can add to the conversation. Sit there and wait for something you’re going to know about, then add something. I’m always adding, never taking. That’s one of the worst things people do.”

For example: you’re at a bar with a friend and see the guy/gal you want to approach, but you’re nervous and unsure of how to go about it. Get close enough to listen in on a bit of their conversation with friends, and then jump in when you know something about the topic at hand. Eastman also emphasizes that you must take risks if you want the payoff to be greater.

“Just go out and push your comfort zone. You can’t sit at home and watch TV and just expect Prince Charming to fall through the window and land in your lap. You have to be proactive.”

The most common mistake people make when it comes to public speaking, Eastman says, is that they wrongly assume that giving a presentation is all about them.

“Presentations are never about you,” he says. “There are three kinds of messages: there’s the intended message, there’s an actual message, and then the received message. In between these things are filters. I want to say, ‘Hey guys, welcome today, I’m so excited to teach this class!’ But, I’m really tired, this is my fifth class of the day, so when I say it, I think it says that, but it really comes across as ‘I don’t want to be here.’ Then it goes through the filters of the audience, and all of a sudden, the message that’s received is fundamentally different from the message that’s intended.”

Once you’ve brought the focus rightfully to your audience and not on yourself, then you can think about your body language. A good place to start: “When you make an emotional conviction, palms up. When you make a factual one, palms down,” Eastman says. “Speeding up and slowing down your speech is also an incredibly effective method.”

And don’t be afraid to call out and confront the filters that are holding your audience back. “If I see someone in my audience squinting, I’ll ask, ‘Are the lights bothering you? We’ll get that fixed.’ Because it’s impossible for me to get my message received if there’s something going on with my audience,” he says.

“There’s all these little tricks if someone’s not paying attention: call their name and ask them what they think about something, and they’ll re-enter the conversation. Then you know you’ve got them for the rest of the hour. Call out the distractions. It’s all about trying to cut through your filters.”

“This one is tricky,” Eastman confesses. “It’s tricky because it’s the one time you might actually want to fall into that 68%.”

There are different types of advice for women and men, Eastman advises, because as a whole society still holds different expectations based on gender. “If you’re a guy, you want to be confident, outgoing, and assertive, because that’s what our society deems to be appropriate for men. For women, it’s kind of the same thing, but not too assertive. It’s a weird kind of balance.”

“Parents want to see that you’re stable. Women view men differently under the age of 23 and above the age of 23. Younger age is more geared toward physical protection and things like that, but if you look when they get older, it’s more geared toward things like good job, good with kids, good in social situations, because you want to spend your life with this person. So if you can extend those traits to the parents, it’s good.”

Eastman also points out that it can be especially difficult because parents have a pre-built guard up when it comes to their kids. “It’s hard because some parents won’t let you in so easily; they’ll put up a filter, so you have to be careful. At the end of meeting the parents, it should feel like they’ve known you for a long time. They should feel happy, not like, ‘I’m not sure about that person.'”

The number one tip: avoid touch if you’re not great at it. “Touch is one of those things that works really well or it doesn’t. It’s either end of the spectrum. Some people touch too much, and I could see in a parent situation being too friendly with touch and they’re like, ‘Who is this person?’ Touch is an interesting thing where it’s like, if you’re good at it, you’re good at it. If you’re not, you’re not.”