Saying goodbye. Bob Saget’s last words to his wife were just revealed in a series of text messages received right before his tragic death at the age of 65.

Saget—who is survived by his wife Kelly Rizzo and daughters Aubrey, Lara and Jennifer, whom he shared with his ex-wife Sherri Kramer—was found dead on January 9, 2022, at a hotel room in Orlando, Florida. According to a statement released by the Orange County Sheriff’s Office at the time, there were no signs of foul play or drug use on the scene. “Earlier today, deputies were called to the Ritz-Carlton Orlando, Grande Lakes for a call about an unresponsive man in a hotel room,” the Orange County Sheriff’s Office wrote. “The man was identified as Robert Saget & pronounced deceased on scene. Detectives found no signs of foul play or drug use in this case.” While Saget’s cause of death has yet to be formally revealed, authorities revealed to TMZ that all signs are pointing to a heart attack or stroke.

At the time of his death, the Full House alum was in the middle of his stand-up comedy tour, “I Don’t Do Negative,” which was scheduled to run through May 2022. He recently updated fans about his experience on tour, taking to social media with a selfie from the stage. “I’m back in comedy like I was when I was 26. I guess I’m finding my new voice and loving every moment of it,” he gushed. “Goin’ everywhere until I get the special shot. And then probably keep going cause I’m addicted to this shit.”

Saget’s family confirmed the news of his death in a statement shortly following the reports. “We are devastated to confirm that our beloved Bob passed away,” their statement began. “He was everything to us and we want you to know how much he loved his fans, performing live and bringing people from all walks of life together with laughter.” The America’s Funniest Home Videos star’s family went on to ask for privacy before urging fans to celebrate Saget’s life. “Though we ask for privacy at this time, we invite you to join us in remembering the love and laughter that Bob brought to the world,” they concluded.

Just hours before his death, Saget shared a sweet message with his eldest daughter Aubrey and a series of texts with his wife Kelly. Keep on reading below to see Bob Saget’s last words to his family.

What were Bob Saget’s last words?

Bob Saget’s wife Kelly Rizzo opened up about the comedian in an interview with the TODAY Show on January 20, 2022, marking one of her first TV interviews since her late husband’s death at the age of 65. During her appearance, Kelly recalled her final conversation with the Full House alum.

Kelly continued, “He told everyone that he loved—and I mean quite frankly anyone he met and even spent any time at all—he told them he loved them endlessly and tirelessly. That was his entire message. If you knew Bob and he loved you, you knew it. There was never, ever a doubt in your mind.”

Saget’s eldest daughter, Aubrey Saget, also took to Instagram shortly after news broke of her father’s tragic death to share the last message she received from her father with fans. The 34-year-old uploaded a screenshot of a text from her dad on January 9, 2022. “Thank u. Love u,” his final message read. “Showtime!” 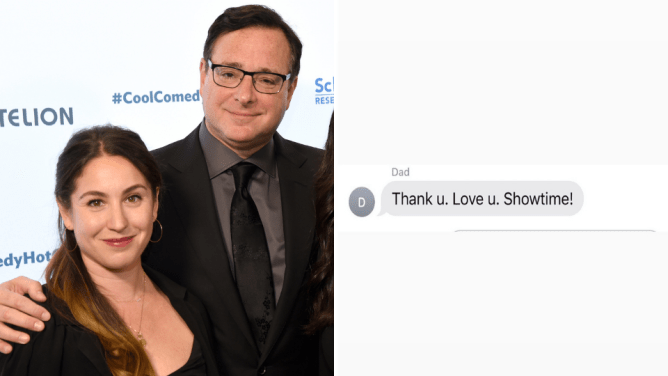 Back in 2016, Saget gushed about his daughters in an interview with People. “They are the light of my life. I am a fortunate man in that all three of my daughters are exceptional,” he said at the time. “[They are] very high beings, very smart people, very wonderful and very brilliant, very beautiful.” With his last message to his eldest daughter Aubrey, it’s clear that Saget still felt the same way all these years later. Rest in peace, America’s dad. 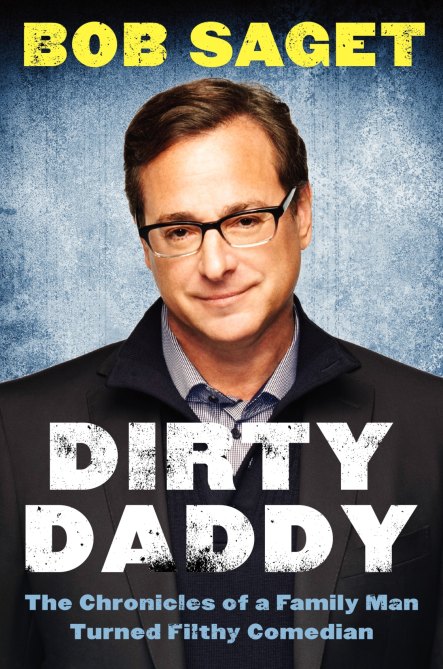 For more about Bob Saget’s life before his death, read his 2014 memoir Dirty Daddy: The Chronicles of a Family Man Turned Filthy Comedian
. The New York Times’ bestseller recounts Saget’s journey as a son born to a family beset by tragedy, through his early days as a stand-up comic, to landing his career-defining gig on Full House and hosting America’s Funniest Home Videos. In his memoir, Saget dishes on what really went on behind the scenes of two of the most successful family shows of all time—from what it was like changing Mary-Kate and Ashley Olsen’s diapers, to working with co-stars like John Stamos and Dave Coulier—all before imploding his family-friendly image on projects like HBO’s Entourage and the 2005 documentary, The Aristocrats, with jokes fans have never heard before from America’s Dad.

Full House, where Bob Saget starred as Danny Tanner for eight seasons from 1987 to 1995, is available to stream on HBO Max. Here’s how to watch it for free.