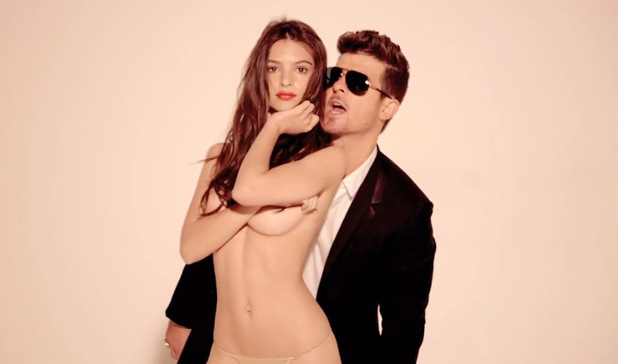 Emily Ratajkowski first made headlines this summer thanks to her topless appearance in Robin Thicke‘s controversial “Blurred Lines” video, which was by far one of the summer’s hottest songs. It seems she’s just getting started. Born in London back in 1991 (yeah, she’s only 22!), the model also has the desire to become an actress, but her most notable credit is a brief role on Nickelodeon’s “iCarly.”

That’s all about to change, as it’s just been reported by leading film industry gossip site The Wrap that Ratajkowski landed a role in the upcoming flick “Gone Girl,” based off of the buzzy 2012 novel of the same name. The David Fincher-directed project is being produced by Reese Witherspoon and will star Ben Affleck and Rosamund Pike as a married couple. Ratajkowski will play Affleck’s mistress, a role that we’d say is perfect for the stunning starlet.

More: There’s a Petition to Remove Ben Affleck as “Batman“

We wonder what Affleck’s wife Jennifer Garner will think of her hubby playing opposite Ratajkowski. If she’s as relaxed about her man’s onscreen behavior as Thicke’s wife Paula Patton, who came up with the concept of the sexy music video, she won’t mind at all.

Regardless, we’re excited to see what comes of this—and here’s hoping Ratajkowski can act!