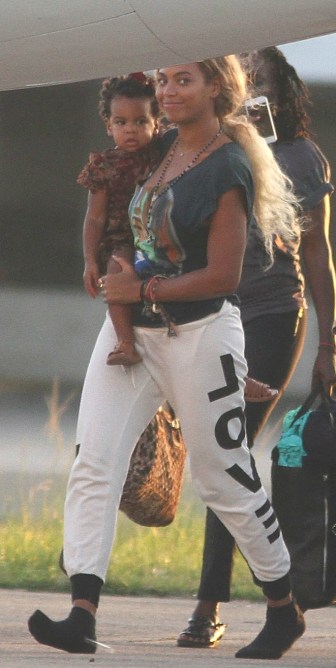 Blue Ivy Carter has only shown her full face to the world about three times, making her somewhat of an enigma around here. And while we certainly don’t blame Mama Bey from shielding her most prized possession from the media, we reach new levels of giddiness every time we see her adorable face, especially when she’s with Beyoncé, who we’re kiiind of obsessed with.

This Sunday, the 32 year-old pop star carried baby Blue  on her hip as they boarded a private jet in Puerto Rico, and judging by the stylish toddler’s facial expression—she’s inherited some of mom and dad’s attitude.

Meanwhile, Queen Bey rocked newly-long (and blonde) tresses which she debuted last week while in Brazil as part of her Mrs. Carter Show World Tour, as well as tapered white sweat pants with “love” written on them, a casual tee, and socks without shoes. Though she was swathed in bling, the outfit was decidedly casual, however, Bey still looked amazing. Shocker.

Lately, it seems Beyoncé has been playing around with looks more so than ever, from a short lived pixie cut that quickly morphed into a long bob, to her summer hipster wardrobe of denim cutoffs, crop tops and even a headband, and of course there are the ultra glamorous designer concert looks. What we  love about pictures of her with baby Blue in tow is how relaxed and happy the singer appears, which we’re taking as a sign she’s not too worried about the recent bevy of rumors surrounding the death of her and Jay Z’s bodyguard.