Second time’s the charm? The Bachelorette 2021 spoilers about Blake Moynes show that he may have made the right choice to crash Katie’s season after his breakups with two other Bachelorettes.

Blake is one of 30-plus contestants on season 17 of The Bachelorette with Katie Thurston. Katie a 30-year-old bank marketing manager from Renton, Washington, was announced as the season 17 Bachelorette at the “After the Final Rose” special for season 25 of The Bachelor with Matt James in March. Katie was a contestant on Matt’s season and was eliminated in 10th place, which makes her one of the earliest Bachelor or Bachelorette eliminees to become the lead of her own season. (Michelle Young, a 27-year-old teacher from Edina, Minnesota, was also announced as the season 18 Bachelorette. Her season will premiere later this year.)

As Bachelor Nation members know, Blake was a fan favorite when he was on a past Bachelorette season. (More on that later.) Will that experience help him with Katie? Ahead are the Bachelorette 2021 spoilers about Blake we know so far. 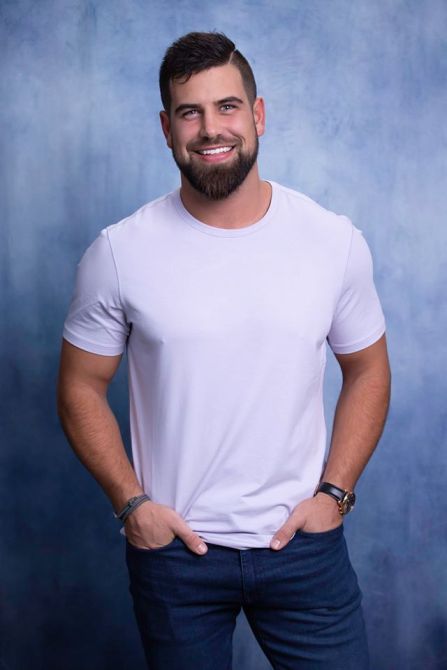 Blake, a 30-year-old from Hamilton, Ontario, was a contestant on season 16 of The Bachelorette with Clare Crawley and Tayshia Adams. He was eliminated in ninth place before Hometown Dates after a one-on-one date with Tayshia, where she told him that she couldn’t see a future with him. (Clare, for her part, broke up with Blake and the rest of her contestants on the fourth episode of her season after she decided to leave the show to be with her winner, Dale Moss.)

Blake made his debut on season 17 of The Bachelorette with Katie Thurston in episode 4. He’s also a friend of contestant Brendan Scanzano, who is also from Canada. In an interview with Us Weekly in June, Katie revealed that she and Blake had talked before her season. “I definitely knew who he was, which also Tayshia’s ex-boyfriend! So that’s weird,” she said. “We had chatted before, but usually what happens is, like, the guys will reach out to the women once they’re eliminated and be like, ‘Good luck, you did great.’ Like very generic, you know? And so to see him, I was like, ‘Why is he here?’ Like, ‘What’s happening?’”

Tayshia, who is a co-host on season 16 of The Bachelorette, told Us Weekly at the time thatshe was “shocked” to see Blake on Katie’s season but approves of their relationship. “I was a little shocked!” she said. “But in a good way, you know, I had a conversation with him and he’s a good man. So, if he felt like he wanted to show up and surprise someone, then I stand behind it.”

Nick Viall, who hosted a group date on Katie’s season, told Us Weekly in June that Katie and Blake’s pre-Bachelorette relationship reminded him of his pre-show relationship season 11 Bachelorette Kaitlyn Bristowe, though not to the same extent. “It sounds like there was some dialogue between Katie and Blake. I don’t think it was to the degree that it was with [me and] Kaitlyn,” he said. “[For us], it was like a pretty intense, you know, two months of dialogue, but I do think Blake will go far.”

He continued, “I think Katie had met him. I don’t know for sure. She had told me about it and it was filmed. They didn’t use it, but it was filmed,”

What is Blake’s job?

Blake works as a wildlife manager. According to his Bachelorette bio for season 16, Blake considers himself a “wildlife enthusiast” and said his “dream woman is outdoorsy.” Blake, whose Instagram is filled with photos of animals and camping trips, also told ABC that “he has no problems talking about his emotions and wants a partner who will appreciate that he wears his heart on his sleeve.”

Does Blake win The Bachelorette?

So…does Blake win The Bachelorette? Yes, he does. According to Reality Steve, Blake proposed to Katie at the Final Rose Ceremony after she give him her Final Rose, and they’re engaged and still together. The other two finalists are Justin Glaze, a 26-year-old investment sales consultant from Baltimore, Maryland; and Greg Grippo, a 27-year-old marketing sales representative from Edison, New Jersey. For more spoilers about The Bachelorette 2021, click here.