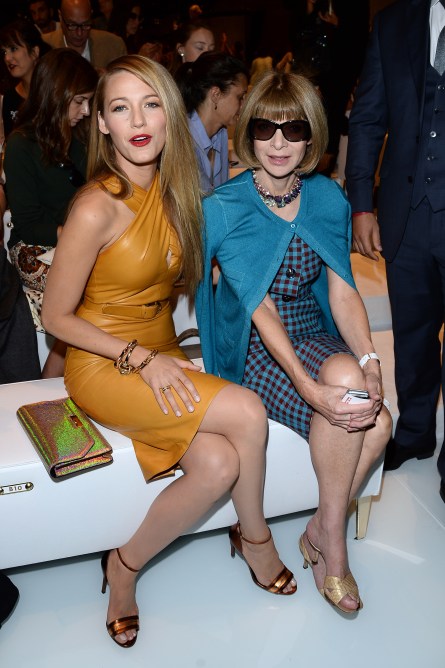 Vogue editrix Anna Wintour is notoriously hard to please, and rarely cracks a smile publicly—unless she’s cooing over baby Harper Beckham. However, one celebrity seems to have made it into Wintour’s fashionable inner-circle, and it’s Blake Lively. The 26-year-old stunning former “Gossip Girl” star has graced the prestigious magazine’s cover twice, and we’re sure there’s more to come.

The stylish duo sat front row at today’s Gucci Spring 2014 runway show, which kicked off Milan Fashion Week. Aside from chatting, laughing, and having an all around fabulous time as gal pals as glamorous as these ladies tend to do, they also both looked amazing.

Wintour went all out for a classic “preppy chic” look, consisting of a gingham dress and a draped sweater. Clearly, the draped garment trend that’s been running rampant in the street style world isn’t going anywhere. Meanwhile, Lively rocked a killer leather Gucci dress paired with a metallic clutch and Gucci sandals. She topped it off with a bold red lip.

Considering Lively rarely makes red carpet appearances these days, this was a killer sighting. Hopefully she’ll be sticking around Milan to pop into other shows, but she probably only attended this one because she’s the face of the brand’s Premiere fragrance.