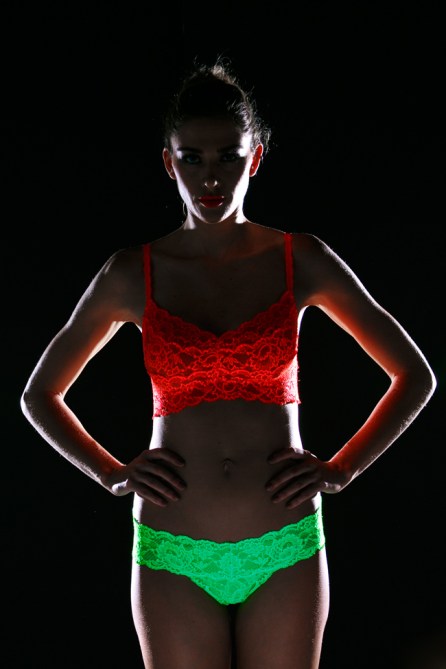 We’ve always been of the mind that underwear is a private thing, to be worn and seen by you and your, uh, most intimate associates. But that’s not the philosophy behind Cosabella’s new Never Say Never collection. The lacy bras and thongs come in bright day-glo colors, but there’s a secret to them: Shine a black light on them and they glow even bolder.  The Never Say Never is black light reactive, and therefore perfect for bringing the party — wherever you go (publicly or privately.)

The bras and thongs are available in fluorescent yellow, green, orange, pink and white, and are available now on Cosabella.com and at several major department stores. They might not be so out of place at, say, a rave or a festival, or as outerwear in some weird, terrifying future world, but in most cases, they’re probably best left to the bedroom.

What do you think of the Cosabella fluorescent black light reactive undies? Would you wear them? Let us know below!