Billy Porter doesn’t clean. Correction: He doesn’t clean anymore. As an Emmy, Grammy and Tony winner (he only needs an Oscar to complete his EGOT), Porter doesn’t have the time he used to have to deep clean his house, so he asks for help. “I pay people to clean,” he says.

But just because Porter doesn’t clean on his own doesn’t mean he can’t appreciate a tidy home. As the spokesperson for Clorox Scentiva’s new Spring Queening Sweepstakes (which offers more than 100 prizes, including $10,000 and Swarovski crystal-encrusted products), Porter understands what a germ-free environment can do for one’s mental health.

“What I loved about this campaign was the focus on how having a clean space helps you declutter your mind,” he says. “It’s more about self-care. I just loved that perspective.”

With a busy year ahead, that clean space to come home to will be especially useful for Porter to destress. Two days before he started filming Pose season 3 (Ryan Murphy’s FX series for which won Porter his first Emmy in 2019), Porter sat down with StyleCaster to talk about the upcoming season, his role as the Fairy Godmother in Camila Cabello’s live-action Cinderella and why he had to respond to parents who criticized him for wearing a dress on Sesame Street. 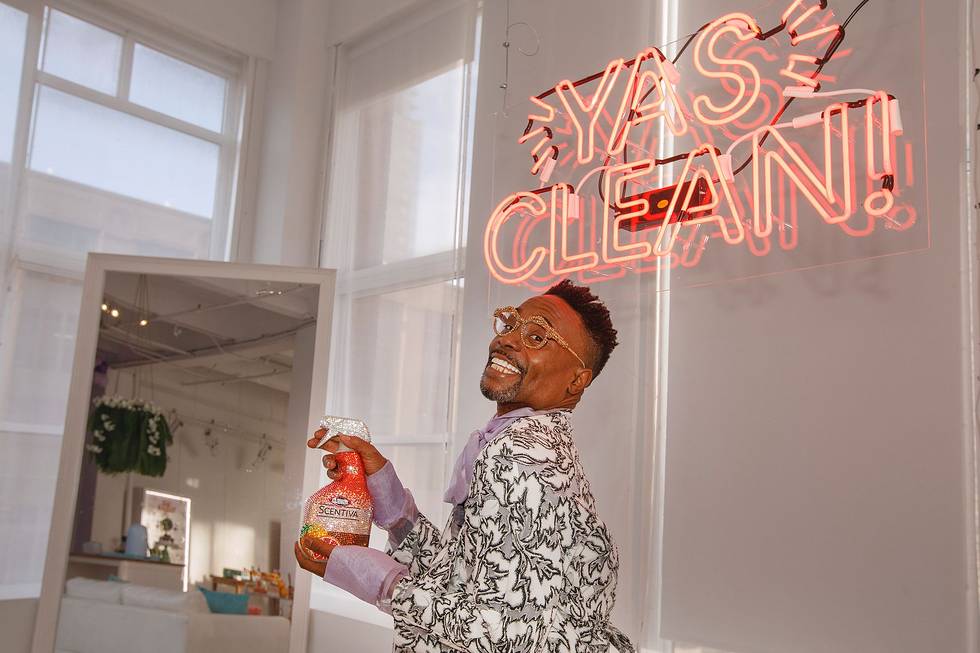 On how the new live-action Cinderella reflects the “current world”

“The whole perspective of Cinderella is shaped by our current world where women have their own agency and women are powerful in their own right and they don’t need to be associated with a man to have that happen. It’s a Cinderella for that era.”

On playing a male Fairy Godmother

“I’ve only had four days [working] on it, but she’s amazing. She’s a sweet girl. She’s smart and talented. This is her first film, and she’s bright-eyed and like a sponge, taking it all in. I met her last Sunday. We had choreography rehearsal. She’s a regular normal person, there with her mom and her assistant.”

“It’s actually been nice to not worry about that and let the people who are in charge of that, do that and tell that story. I really trust them implicitly. The people who have lived it. The people whose story it is are the helm telling it. I feel safe and comfortable. I just got the first two scripts and they’re amazing. We have a lot to look forward to in season 3.”

“Sesame Street has always been there to teach children the ways of the world. They asked for the Oscars dress. I’m singing a song with the puppets, talking about friendship. It really pushes the conversation that there are different people on this planet. That’s what it’s about. How people respond to me is none of my business. God bless them. This is a free country. You can respond however you want. But my message is about love. My message is about peace. My message is about respecting everyone’s humanity.”

On how he was almost the host of HBO Max’s upcoming voguing competition series, Legendary

“I was supposed to be the host. We couldn’t get our schedules together. It’s something I’m looking forward to. It looks like fun. It’s sort of the real version.”