Royally starstruck. Billie Eilish’s royal rules to meet Prince William, Kate Middleton and Prince Charles went in one ear and out the other when she met the Duke and Duchess of Cambridge and the Prince of Wales at the No Time to Die premiere in London on September 28.

In an interview on Jimmy Kimmel Live! on Wednesday, October 14, Eilish—who sings the theme song for No Time to Die—revealed that she was given a “list” of “rules” to read before she met the royals, which she completely forgot about when she finally came face-to-face with them. “I assume they read you the rules and all that stuff before you met them?” Kimmel asked Eilish, who responded, “Oh yeah. Oh yeah. There was a whole list of things.”

Kimmel then asked, “Did you pay attention to those rules?” to which Eilish mouthed, “No.” Eilish—who also met Camilla, Duchess of Cornwall—explained that she “tried” to remember the rules but forwent them when she realized how comfortable the royals made her feel. “But I tried to. I was planning on it and they were just so normal,” she said. “They didn’t make me feel like, ‘Oh, I’m scared, I can’t talk to them.’ They were very complimentary and they had all these questions for me. They were just very friendly and funny and sweet. I don’t know, I can’t complain. It was amazing.”

It’s unclear what royal rules Eilish broke, but she and her brother, Finneas, were both photographed talking to Charles and William and shaking Kate’s hand. According to the royals’ official website, the proper way to greet a member of the British royal family is to bow from the neck for men and curtsy for women, though a handshake has also become an appropriate way to meet the royals. “For men this is a neck bow (from the head only) whilst women do a small curtsy. Other people prefer simply to shake hands in the usual way,” the website states.

As for how to refer to the royals, the website states that the formal way to address the Queen is “Your Majesty” followed by “Ma’am.” Other royals are addressed as “Your Royal Highness” followed by either ‘Sir’ or ‘Ma’am’ depending on if they are a man or a woman. “On presentation to The Queen, the correct formal address is ‘Your Majesty’ and subsequently ‘Ma’am,’ pronounced with a short ‘a,’ as in ‘jam,'” the website states. “For male members of the Royal Family the same rules apply, with the title used in the first instance being ‘Your Royal Highness’ and subsequently ‘Sir’. For other female members of the Royal Family the first address is conventionally ‘Your Royal Highness’ and subsequently ‘Ma’am.'” 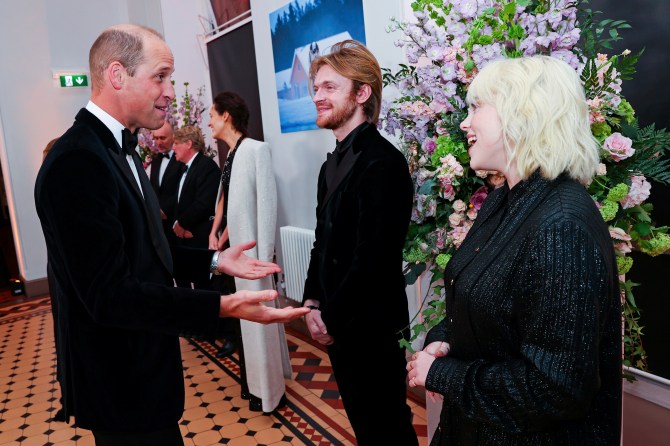 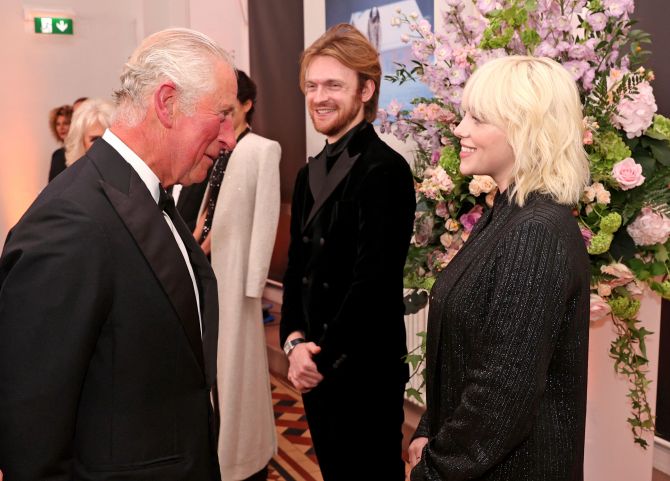 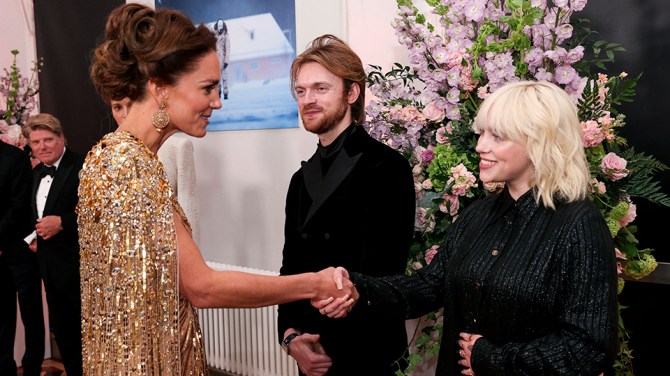 Eilish wasn’t the only celebrity to meet the royals at the No Time to Die premiere. In an interview with Entertainment Tonight in October, Malek explained that he tried to think the royals as anyone else when he sees them. “For me, I just try to treat them like I would anybody else,” he said. “I’m sure a dose of normality is probably something that is quite refreshing to them.” He continued, “I remember we were at the BAFTAS, and I met them and they have a lot of questions to ask you. But it is nice to just say, ‘How are you doing? How are you dealing with all of this? I know you just had kids, one kid, specifically.’ So, just try to be normal because they live a very unusual life I imagine.”