A callout? After going public, Billie Eilish and Jesse Rutherford’s age gap has been a hot topic in the sphere of celebrity dating. The “bad guy” singer and the “Sweater Weather” musician might have poked fun at the criticism.

On Halloween weekend, Billie dressed up as a baby, while her boyfriend Jesse was dressed up as an old man. Billie made the relationship official on her Instagram when she posted her and Jesse’s costumes in a photo at the end of a carousel. Fans immediately reacted to the costumes on Twitter on the Twitter account PopCrave. One person who quote-tweeted the PopCrave tweet of the costumes wrote, “Billie is grown enough to know how weird and creepy this is btw.” Another person replied, “i wish i could wash my eyes with soap and scrub this from my mind” Other fans defended Billie by replying to the critics, “Billie is so real like 😭”

So, why is there so much controversy about the musicians’ relationship? Read below about what Billie Eilish and Jesse Rutherford’s age gap is.

What is Billie Eilish and Jesse Rutherford’s age gap?

What is Billie Eilish and Jesse Rutherford’s age gap? The age gap between the 21-year-old “Happier Than Ever” singer and the 31-year-old “Daddy Issues” musician is 10 years. 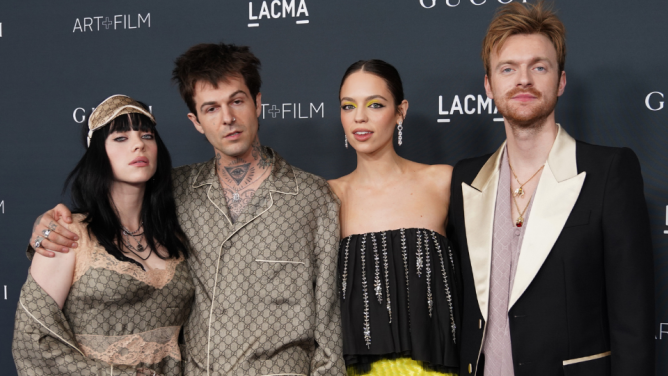 Many fans took to Twitter to react negatively to the age gap. One person tweeted “billie eilish cannot legally drink and jesse has known her since she was 15 🫶 gotta love hollyweird!” Other fans defended Billie by saying “Not a clue who this Jesse dude is but Billie Eilish is 20 years old not 16. She’s a whole adult.”

Billie’s own brother Finneas echoed these latter sentiments. One person on TikTok wrote: “Your sister’s dating a 31-year-old man and your music is shitty,” to which Finneas responded: “I want my sister to be happy and safe,” Finneas said, “and she is a 21-year-old adult perfectly entitled to make her own life decisions.”

The “bad guy” singer and the “Sweater Weather” musician were seen out on a date at Universal Studios’ Halloween Horror Nights in October 2020. They were seen holding hands, per TMZ. However, the two have not confirmed a relationship. Another source told Hollywood Life that the two have been friends for a while and respect each other. “Billie and Jesse have known each other for years so even though they’ve only been dating a short while, she feels very comfortable with him,” the source explained. “Billie knows fans may be concerned over their age difference, but it really isn’t a concern of hers because they connect on so many levels. Plus, she’s turning 21 in a few months so there won’t be as many restrictions in terms of where they can hang out because she’ll be old enough at that point.” The source went on to say that Billie admires the “Daddy Issues” singer,  “Not only is he very successful as an artist, but he’s also incredibly smart and funny, and he treats her with nothing but respect. Things are still relatively new but it’s going really well so far.”

During her annual Vanity Fair interview, she was asked once again if she was dating someone. She appeared really jubilant for the segment, “It’s really cool and I’m really excited and I’m really happy about it. I managed to get .. my life to a point where I not only was known by a person that I thought was the hottest f–king f–ker alive, but pulled his ass! Are you kidding me? Can we just [get a] round of applause for me?” After the crew clapped for her, she said, “Thank you, Jesse Rutherford, everyone. I pulled his ass. All me. I did that shit. I locked that motherf–ker down.” 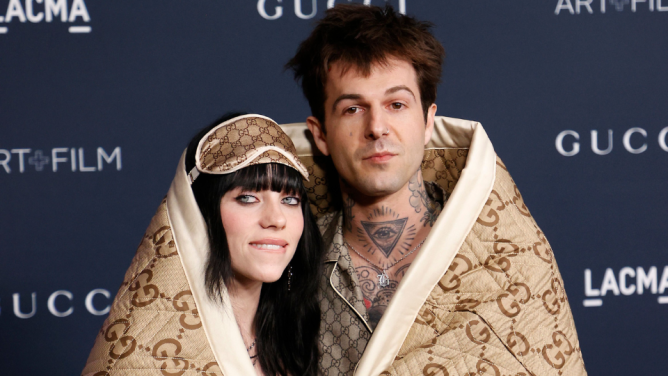 A source told Us Weekly that Billie is very content with the relationship and their age difference. “They have weird inside jokes between them that no one else can understand,” an insider revealed. “They’re always laughing and have their arms around each other. Billie and Jesse spend all the time they’re not working, together.” Eilish “likes that he’s older.” The source continued, “She says he is doting, caring and they have a ton of fun together. Their age gap makes their relationship even more fun and exciting. They’re a unique couple and have their own energy and seem really in a strong honeymoon phase.”

What does Billie Eilish’s family think of her and Jesse Rutherford’s age gap?

A source told Hollywood Life that Billie’s brother Finneas and Jesse go way back and he doesn’t mind his relationship with his sister. “Jesse gets along flawlessly with [Billie’s] brother Finneas, who is so important to her,” the insider said. “Finneas approves of this, as he really loves seeing his sister so happy and giddy. Billie has gone through such amazing changes and growth in the past few years, and she is ready to be with a man who is on her same level. She says that Jesse is the perfect guy for her.” The source continued, “The chemistry between them is electrifying and everyone around them can see this. They are both passionate about their music and Jesse treats Billie with so much respect and admiration. He does not look at her as a superstar or anything like that.”

Apparently, Billie’s parents approve of their age gap and the relationship on the whole, too. A source told HollywoodLife on November 1, 2022, that her mom, Maggie Baird, and her dad, Patrick O’Connell, have been introduced to Jesse and they’re very supportive of the relationship. “She’s fallen for him and vice versa. She has introduced him to her parents, and they think he is a total gentleman,” the source said. “They believe that they complement each other well. They trust him and he is sincere and only wants to make sure she is happy.”

Billie was recently in a relationship with podcaster Matthew Tyler Vorce. He confirmed his breakup with Billie in a direct message to his ex-girlfriend’s fans on his Instagram Story on May 30, 2022, in which he also denied cheating on the singer. “Nobody cheated on anyone. Relationships end. Simple as that. Creating rumors and LYING on the internet is dangerous.”He wrote in a separate Instagram Story, “The fact that thousands of people take time out of their day to write the most heinous things one someone they will never knows (sic) posts is the most cowardly thing you can possibly do. Live your own life.” The posts came after Eilish’s fans speculated that Vorce, a podcaster, cheated on her and flooded his social media with negative comments. Meanwhile, Jesse was in a long-term relationship with designer and influencer Devon Lee Carlson, when they split up in 2021.

Billie also wrote the song “Your Power” which fans believe is about her formerly secret ex, Brandon Quenton Adams, a.k.a. “Q.” The rapper appeared in her recent Apple TV+ documentary, Billie Eilish: The World’s a Little Blurry. The pair dated for a year when Billie was underage—she was 17, whereas Q was 22—before they split for good in June 2019. Billie opened up about Q’s “destructive” behavior in the doc, and now some fans think she’s addressing their relationship again on “Your Power” with lyrics like, “You said you thought she was your age,” alluding to their age difference.