Of the many acts tonight, Billie Eilish’s Grammys 2022 performance is among the ones fans have been waiting for the most. The “No Time to Die” singer will make her return to the Grammys stage for the second time ever, following her first appearance at the 63rd Annual Recording Academy Awards back in 2021.

The 64th Annual Grammy Awards ceremony airs live from the MGM Grand Garden Arena in Las Vegas on April 3, 2022, and recognizes the year’s best recordings, compositions and artists from 2021. This year’s host is South African comedian Trevor Noah, who returns after hosting the Grammys ceremony in 2021. The 2022 Grammys include a long list of nominees: Jon Batiste received the most nominations with eleven total, followed by Doja Cat, H.E.R. and Justin Bieber with eight each. Pop phenom Olivia Rodrigo, meanwhile, trails closely behind with seven nominations.

As it turns out, Rodrigo and Eilish are neck and neck this year. The Happier Than Ever artist is also nominated for seven awards, including three within the Grammy’s Big Four categories. Her nominations include Album of the Year and Best Pop Vocal Album for Happier Than Ever, Best Music Film for Happier Than Ever: A Love Letter to Los Angeles, along with Song of the Year, Record of the Year, Best Pop Solo Performance and Best Music Video nomination for her 2021 album’s title track, “Happier Than Ever.” Billie Eilish’s Grammys 2022 performance comes one year after her impressive sweep at the 63rd Annual Recording Academy Awards, where she became the first person since 1981 to win all of the “Big Four” awards at the Grammys with a total of seven awards at the time.

In addition to Eilish, the Grammys stage will see a stacked lineup of performances by fellow nominees: Performers include BTS, Olivia Rodrigo, Lil Nas X with Jack Harlow, Brandi Charli, Lady Gaga, Brothers Obsborn and more. But we all know who fans are here for! For everything there is to know about how to watch Billie Eilish’s Grammys 2022 performance online as it airs live, just keep on reading below.

Another great option to watch Billie Eilish’s Grammys 2022 performance online for free is with Fubo TV’s free trial. Fubo TV offers a seven-day free trial, which is more than enough time to stream Billie Eilish’s Grammys 2022 performance. Along with CBS, Fubo TV offers more than 100 channels, including NBC, CNN and CBS, at least 250 hour of DVR and a streaming library with hundreds of hours of TV shows and movies. After the free trial ends, Fubo TV costs $64.99 per month, so be sure to cancel it before you’re charged. 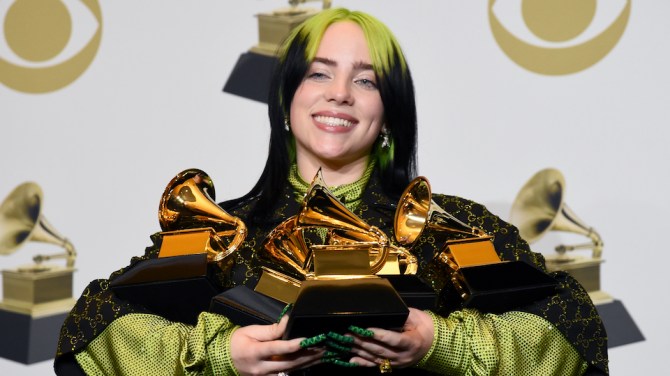 The best way to watch Billie Eilish’s Grammys 2022 performance outside the US is with a VPN, which allows users to set their computer’s location to another country and access websites that would otherwise be restricted by their location. Billie Eilish’s Grammys 2022 performance airs live on CBS and is available to stream on Paramount Plus. To watch the show, however, viewers outside of the US will need a VPN. One of the best VPN services out there is ExpressVPN, which is easy to use and offers 90 days for free.

The service is also far less expensive than other VPN services available. ExpressVPN costs $6.67 per month for a 12-month plan ($80.04 total), $9.99 per month for a six-month plan ($59.95 total) or $12.95 per month for a monthly subscription after the free 90-days. ExpressVPN also provides a 30-day money-back guarantee if you subscribe and decide not to use it. Of course, with a VPN, viewers can do more than just watch Billie Eilish’s Grammys 2022 performance from outside the United States. They can also access international versions of Netflix, Disney Plus and HBO Max, which have different content than in the United States, as well as international streaming services like Hayu, which has access to shows like Real Housewives, Below Deck, The Bachelor and hundreds of other domestic and international reality TV shows.

So how can one watch Billie Eilish’s Grammys 2022 performance outside the US? Here are step-by-step instructions.