Billie Eilish is an icon in her own right—from music and fashion to beauty and hair, she’s definitely a trendsetter on all fronts. She tends to have quite expensive taste, though, sporting head-to-toe Gucci ’fits often and applying luxe Charlotte Tilbury creams. So, we were more than thrilled to discover that Billie wears an actually affordable bra that we think you’ll reach for 24/7 this summer.

We say that with certainty because Boody’s LYOLYTE Racerback Bra is made of a cooling fabric, which is exactly what we need while we sweat non-stop this summer. This isn’t your average bra, though. It’s good-looking enough to wear on red carpets.

Billie wore the bra with her Grammys red carpet look by Rick Owens and it peaked through the back to add even more oomph to the ensemble. She also wore it in an Instagram post right before Coachella.

The racerback bra is wireless (a.k.a. so comfy) and breathable. It also features a classic scoop neckline, thin elastic straps and a crossover style in the back. The back design is perfect for when you want the straps to add some style, which is exactly how Billie wore the bra to the Grammys and Coachella. The award show took place in piping hot Las Vegas, while the music festival went down in the California desert. Billie clearly opted for Boody’s cooling bras for a reason.

One reviewer who dubbed it a “Magic cuddle bra” said, “This fits like a dream and feels like being hugged by an angel.”

We totally believe it because of the bra’s many design features and its unique fabric. To cool off your cleavage this warm summer, throw on Boody’s LYOLYTE Racerback Bra. It’s everything you wanted and more.

RELATED: The $17 Bra That Bella Hadid Loves Will Replace Your T-Shirt Collection This Fall 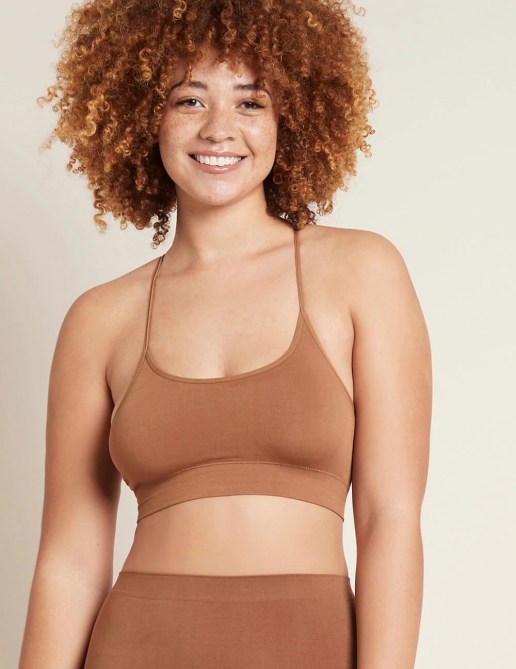 Though this bra might look super simple, it has tons of details that make it so good and Billie Eilish-worthy. For one, it has a built-in support rib band that provides support. It also doesn’t have padding for those who aren’t huge fans of cushioning in their bras, and it features a double front layer to make sure you get full coverage.

As for the actual fabrics, the bra is made from 68 percent bamboo lyocell, 24 percent nylon and 8 percent spandex. The lightweight material is so soft against your skin and provides just enough stretch, too. The LYOLYTE Racerback Bra additionally does not have any seams, making it smooth and comfortable—so much so that you could wear it to an award show or music festival.

“I absolutely love this bra—the fabric, the stretch-ability and honestly it looks so good on,” wrote one five-star reviewer. “They’re so comfy for every day.”

We also love the seven neutral tone color options, since they’re more versatile and can match almost everything.

“Super comfy. Great fit and it feels like you’re not wearing anything,” wrote another shopper.

We know you’re probably cleaning out your closet to make room for all your summer finds. Don’t forget to buy a couple of new bras, like Boody’s $27 LYOLYTE Racerback Bra, that’s tailor-made for the warmer months. If Billie can endure an award show in Las Vegas and a music festival in the California desert while wearing this bra, then we’re sure it’ll keep you cool wherever you’re off to this summer.