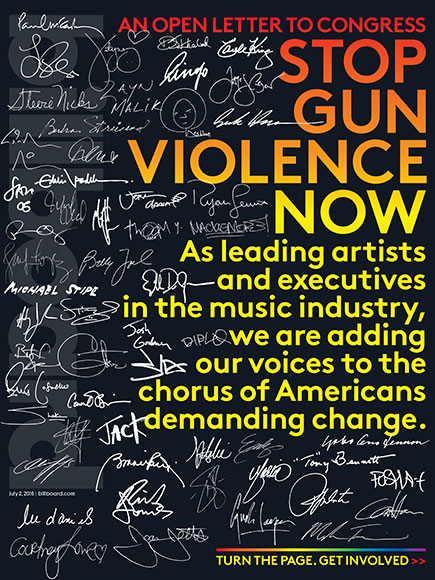 After the Senate rejected four gun-control proposals Monday, Billboard took action by rounding up the only people who can make anything happen in this country: celebrities. The magazine responded practically overnight by getting nearly 150 musicians, actors, and music executives to sign an open letter to Congress.

The signatures are featured on the cover of this week’s issue, which serves as a direct appeal to Congress. “As leading artists and executives in the music industry,” the cover says, “we are adding our voices to the chorus of Americans demanding change.” Inside there’s a letter that calls on Congress to “do more” to prevent gun violence by requiring background checks for all gun sales and stopping suspected terrorists from legally purchasing guns.

Music always has been celebrated communally, on dancefloors and at concert halls. But this life-affirming ritual, like so many other daily experiences—going to school or church or work—now is threatened, because of the gun violence in this country.
The one thing that connects the recent tragedies in Orlando is that it is far too easy for dangerous people to get their hands on guns.
We call on Congress to do more to prevent the gun violence that kills more than 90 Americans every day and injures hundreds more, including:
Require a background check for every gun sale
Make it illegal for suspected terrorists to legally buy guns
Billboard and the undersigned implore you—the people who are elected to represent us—to close the deadly loopholes that put the lives of so many music fans, and all of us, at risk.

It then lists the name and signature of everyone involved, which is no small feat when you considered how quickly this was turned around. It includes mostly musicians, including Nick Jonas, Selena Gomez, Zayn Malik, Katy Perry, Demi Lovato, and a lot more. Check out the whole list below. 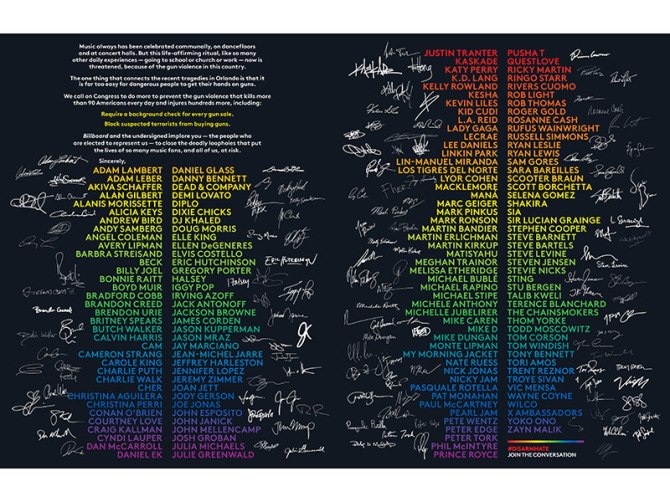