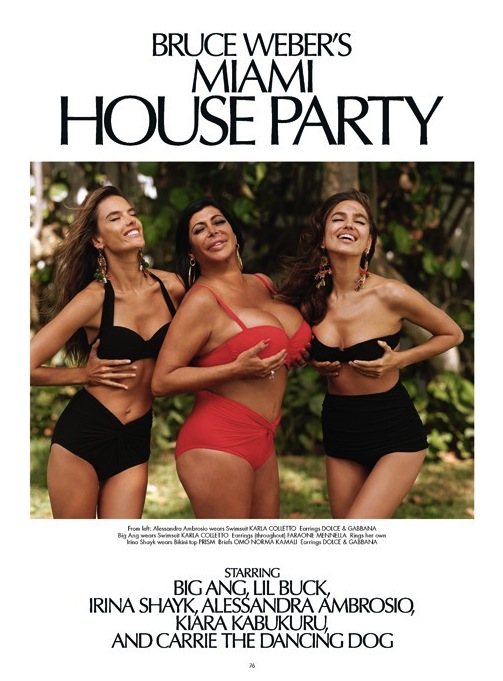 For the first issue of Carine Roitfeld‘s CR Fashion Book, the French editor shocked the fashion world by forgoing a typical high-fashion model for the cover, and instead tapped curvy blonde “Sports Illustrated” model Kate Upton.

Now, for the second issue, Roitfeld is pushing the shock envelope even further, by featuring someone so vastly outside the fashion box in the mag’s newest spread: Big Ang from “Mob Wives.” Yes, you heard that right.

In case you’re unfamiliar with “Mob Wives,” it’s a VH1 reality show that documents the trials and tribulations of a group of Staten Island gal-pals with ties to the mafia. Big Ang—who some swear was a man in a former life—is a fan favorite thanks to her “tell it like it is” attitude and voice that sounds like she’s been smoking two packs a day since she was 13 (which she probably has).

Ang was shot by fashion photographer Bruce Weber, alongside real models Lil Buck, Alessandra Ambosio, Irina Shayk, Kiara Kabukuu, and Carrie the Dancing Dog. Yes, it may seem a bit random, but we feel like Big Ang is probably in on the joke. Plus, this isn’t her first foray into fashion: She previously appeared in a spread for popular gay magazine Next dressed as Marilyn Monroe.

The second issue of CR Fashion Book—now $20 per issue—will be on newsstands on February 28, and WWD reports that circulation is up 15,000 from its inaugural edition.