In case you haven’t noticed, Beyoncé’s general image over the past year or so has made a drastic turn from the squeaky-clean mother and wife version of the American pop star to an all-out sex goddess. Her videos for songs like “Yoncé,” “Partition,” and “Rocket” are borderline explicit, and Bey has been showing off more bare skin than we’ve ever seen before.

For her May 2014 cover story in gay magazine Out, Bey spoke about her new-found sexual openness, and is as unapologetic about it as ever.

“I’d like to believe that my music opened up that conversation. There is unbelievable power in ownership, and women should own their sexuality,” Beyoncé told the mag. “There is a double standard when it comes to sexuality that still persists. Men are free and women are not. That is crazy.

The old lessons of submissiveness and fragility made us victims. Women are so much more than that. You can be a businesswoman, a mother, an artist, and a feminist—whatever you want to be—and still be a sexual being. It’s not mutually exclusive.”

There are those who have compared Beyoncé’s so-called sexual evolution to the more sex-driven acts of folks like Rihanna and Ciara, and there’s no doubt that some particular aspects of her image—the short blonde hair, the hipster-inspired style choices—recall those two ladies. But she also seems to be coming into her own as a sexual grown-up, and for that, we have to give her props.

Head to Out to read the full story, which is really fascinating, and see more images of the star in all her super-sexy glory! 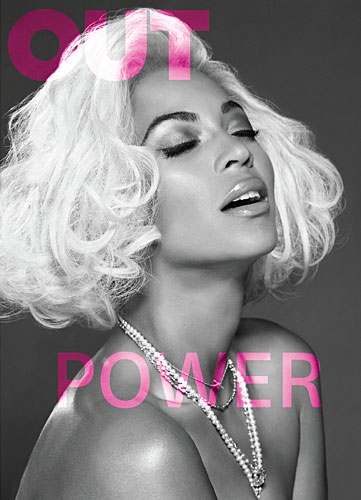 Beyoncé on the cover of Out magazine’s May 2014 issue