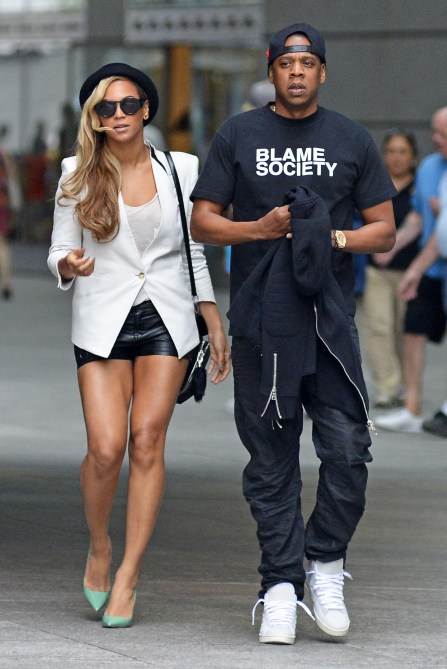 Beyoncé was quite the jetsetter this weekend. After hitting the stage for a stellar performance at Gucci’s Chime for Change concert in London, the singer headed back to her home turf of New York City to have a date night with hubby Jay-Z. The two were spotted out and about in Battery Park before heading to New Jersey for the annual Summer Jam concert. And for their evening together, Queen Bey pulled one of her favorite blazers from her closet.

Back in December, Beyoncé posted a photo to her Instagram wearing Helmut Lang’s Pointed Cuff Blazer in oxblood; and Sunday she stepped out wearing the same jacket in ivory, pairing it with a pair of leather shorts, a black handbag, and a set of mint pumps.

Typically, the brand’s edgy designs don’t come cheap but we joyfully discovered that this particular jacket is majorly on sale right now. Down from $645, the blazer is currently available at Barneys for just $259.

While $259 is certainly nothing to sneeze at, we’re suckers for the opportunity to buy sleek, versatile designer pieces at such a discount (more than half off!) and this one might just be too good to pass up.

Head over to Barneys’ website to make the Helmut Lang blazer yours now!

MORE ON STYLECASTER:
Beyoncé Is Not Pregnant, According To Jay-Z
See Beyoncé’s Boutique On Rent The Runway
Listen Now: Solange and Beyoncé Both Release Songs On The Same Day