Y’all, I have to be honest: I don’t see enough of Beyoncé. Of course, she’s entitled to her privacy, but with Meghan and Harry talking to Oprah just last week, I’m seeing more of the British royals than I am of my own queen! I wasn’t sure if Bey would make an appearance at the 2021 GRAMMYs, but I’m happy to confirm that she did in fact show up in a look—and surprise, surprise, she killed it.

Beyoncé is one of those celebrities that lives in my head rent-free, whether she’s posting up a storm to promote the latest Adidas x Ivy Park drop or totally off the grid, getting her mom duties on with Blue Ivy, Rumi and Sir. While I like when celebs like the Kardashians keep me in the loop with daily Instagram Stories and updates, hearing from Bey so little has me constantly wondering what she’s up to. She’s literally always on my mind!

Since pandemic precautions have changed the structure of our beloved award shows, it was up to celebs to bring the sartorial heat and serve us their looks via social media or during their live acceptance speeches, and Queen Bey was up to the challenge. 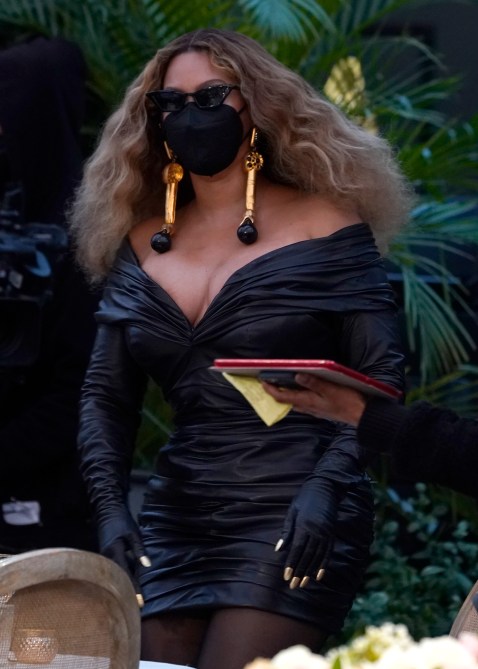 I spotted her in the live crowd early on in the night, cheering for H.E.R. and wearing a full black ‘fit featuring an off-the-shoulder minidress, long leather gloves with metallic gold nail accents, black sunnies, black tights and massive, dramatic black and gold dangly Schiaparelli earrings. Her teased hair looked especially voluminous, but unfortunately that was all the glam we got. Between the sunnies and her black face mask, I didn’t get the chance to peep her makeup!

When she finally took the stage to accept an award with Megan Thee Stallion, the mask came off and we could see Bey’s glowy glam in all its glory. Excuse me while I throw out all the powder in my makeup collection. I could only dream of shining so bright!!! 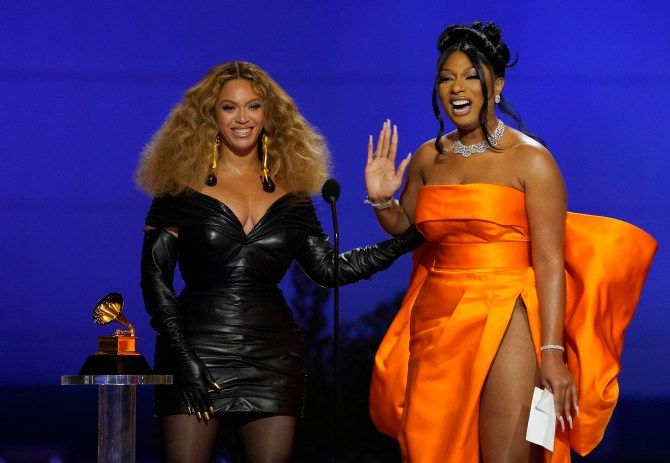 Bow down! This look was pure fire and she knew it. I mean, if it was anyone’s night to show off, it was hers—she’s the most-awarded female artist in GRAMMY history, after all. NBD! Megan totally geeking out over standing beside her represented how pretty much all of us feel when we look at Bey.

We may not see her flexing on the ‘Gram every other day, but let Beyoncé’s GRAMMYs serve and that record-breaking amount of nominations show that she’s still number one. Team Bey for live!