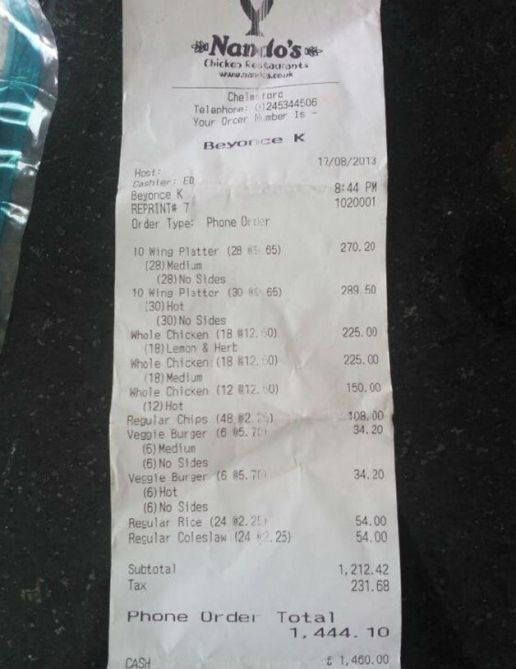 In case there was any question (which there wasn’t, really), it’s clear that Beyoncé is kind of a normal person! First, we saw her shopping at Target and dressing like a hipster at Coachella, and now: she’s stopping by fast food restaurants to treat her peeps to some delicious snacks.

The pop star stopped by fried chicken restaurant Nando’s in the U.K. to buy the cast and crew of her Mrs. Carter Show World Tour mass amounts of chicken and fixings, to the tune of more than $2,200.

MORE: Beyoncé’s Diet: See Everything She Eats and Drinks While On Tour

The receipt above proves that “Beyoncé K” ordered a ton of chicken (she ordered 48 whole chickens), wings, chips (more than $100 worth!), veggie burgers, rice, and cole slaw from the South Africa-based fast food chain, to satiate her crew’s hunger following her performance at the V Music Festival in Hylands Park.

MORE: Beyoncé Biked to Her Last Concert in Brooklyn

We just love the mental image this story conjures: Queen Bey and all her dancers, backup singers, and musicians (among others, to be sure) sitting on the bus and chowing down on some home-cooked poultry and sides. As incredibly famous and wealthy as she is, Beyoncé seems like a legitimately down-to-earth, fun person; what kind of celebrity spends more than $2,000 on grub for the people who help support all their fame and riches? A nice one, that’s who!

And while it might not be the healthiest meal ever served up, after months and months of strenuous work, we’d say Bey and all her peeps deserve to indulge.