Well, well, well, look who’s changing their plans. After making a big show of declining Kim Kardashian and Kanye West‘s wedding invitation last month, it looks like Beyoncé and Jay Z will attend after all. Good press is a powerful thing, people. 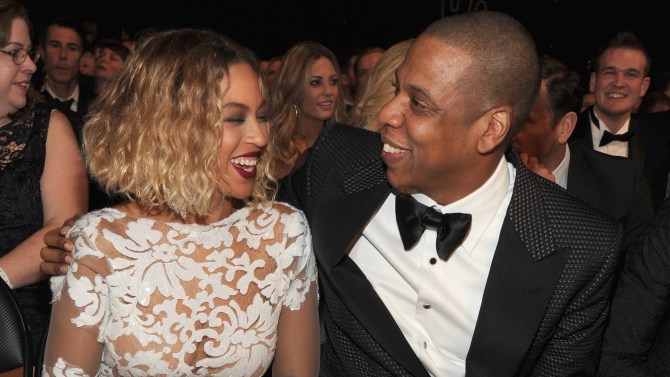 Last month, it was reported that Jay and Bey were planning to skip the nups because the ordeal was poised to be way too high-profile (read: they definitely thought they were too famous), but planned on treating KimYe to a $200,000 yacht honeymoon as an “we’ll make it up to you” gift.

According to RadarOnline though, Jay Z and Beyonce pulled an audible and decided RSVP yes after all, with Jay finally accepting BFF Kanye’s request to serve as Best Man.

“Jay sent a gift to Kanye with an inscription referring to Jay Z as the rapper’s ‘Best Man.’ The gift was a gold-plated, diamond-encrusted flask, delivered with a $10,000 bottle of scotch, for Kanye to have for his wedding day,” an insider told Radar

“Kanye was almost jumping up and down, he was so excited. He was running around Kris‘ house to find Kim saying, ‘Baby, look! Look! Jay and B are coming!”

However, the superstar couple refuses to be filmed at the wedding and at any festivities surrounding it.

“E! wants to shoot the rehearsal dinner, but Jay is putting his foot down. So the drama continues. Instead, Kim and Kanye are now in talks with Vogue to publish some wedding photos, after their cover did so well,” said the insider.

The source added: “Jay and Bey don’t mind that at all, as there will be a write-up with it, and they can promote their dual tour.”

Radar is reporting that Kardashian and West have got a lot of backlash from their friends about the wedding plans, so they scaled back filming plans with the E! Network and made certain parts off limits — for instance, using their daughter North West as a pawn.

“They used the loophole in Nori’s contract that they can say no to any life moment she is a part of being filmed, so it would not be in breach of contract,” the source revealed.

The wedding will take place in Paris on May 24.

This week, Jay Z and Beyoncé have been at the center of a pretty surprising firestorm after surveillance video surfaced showing Bey’s sister Solange trying to attack Jay Z in an elevator after the Met Gala.