It’s a Midtown morning like any other, with tourists, finance bros and personal assistants forming a busy blur of bodies down Fifth Avenue in New York City—except, on this day, Betty Who is cutting through the crowd. When she makes it to STYLECASTER’s block, it’s impossible to miss her: she’s iced out in chunky silver jewelry, sunnies, her signature platinum blonde locks and an electric blue half-sleeve shirt so bright it outplays the sky. She’s buzzing. And it’s not just from the iced coffee she arrives with in hand (though, that may have something to do with it.) “It’s the size of my freakin’ face!” she exclaims, presenting the half-drank beverage like a trophy as we make our way inside.

After signing in at reception (with her legal name, Jessica Anne Newham), Betty Who, or Jess, as her friends and family call her, reveals why she’s so amped. The Australian-born singer and songwriter attended a Tony’s afterparty over the weekend, and visions of the star-studded night are still fresh in her mind. “I got the dancefloor started. I will fully take responsibility for that,” she says, grinning as we ride the elevator. “I was like the cool first cousin who’s drunk at the wedding. He’s the first one on the dance floor, and everybody’s like, ‘He’s crazy, isn’t he?’ That’s my energy,” she jokes. For a moment, Newham looks ready to break out the moves, but the four cramped walls surrounding us simply wouldn’t allow her ample space to shine, so she decides against it. It’s probably the right call. After all, shrinking herself to fit into a box isn’t something she’s interested in these days.

For Newham, the last two years have been an exercise in making and taking up space—not only as a performer, but as the woman, wife and friend who comes before the spotlight. After dropping “I Remember,” the fifth and final single off her titular album, Betty, in 2019, Newham took a hiatus from releasing new music altogether. During that time, she got married to photographer Zak Cassar, starred in the HBO Max film Unpregnant and spent countless hours realizing things (“Thank you, Kylie Jenner,” she quips), about her life and career before turning 30.

I can be myself. And that’s enough.

Like so many of us, the pandemic provided that necessary, if sudden, push to reconnect with the parts of herself that she hadn’t had a chance to examine in years. There were the typical excursions into homemaking and hobbies—Newham, a self-professed Great British Bake Off superfan, “fell in love” with baking and nailed down the show’s flaky Portuguese custard tarts, pastéis de nata—but mostly, there were other, more existential matters to address. “For the first eight months, I was pretty bereft. I didn’t know what to do with myself,” Newham recalls from our office library. “Who am I without this thing that I’ve been doing for ten years? I didn’t know what the answer to that was.”

Newham, who originally rose to fame after her song “Somebody Loves You” was featured in a viral video of a gay couple getting engaged, has spent the better part of the last decade releasing a steady slate of singles, EPs and albums between tours around the world. Inevitably, it’s a lifestyle that begs for distraction. “Being on the road is such a high-intensity lifestyle, and it gives you so much of an excuse to not deal with the things that are living inside of yourself,” Newham says. In hindsight, she was always “caught up” in too many things to take stock of the present. “I’m still working on knowing that it’s not about the carrot on a stick in front of you,” Newham reflects. “That story never ends. When you’re constantly chasing the next thing, you’re always going to be dissatisfied. Now, I’m just really trying to figure out how to be grateful in this moment, regardless of the outcome—which is a lot easier said than done.”

Sometimes, staying present looks like slowing down to bask in the fun stuff—hello, baked pastries and afterparties!—but for Newham, it also means meeting herself exactly where she’s at, without judgment. “I’m letting go. When something doesn’t feel quite right, I don’t have to make myself feel bad about it. I don’t have to feel shame. I don’t have to feel guilt,” she explains. “If I didn’t like an outfit, it’s not because I’m a disgusting monster. It’s just like, ‘Oh! It just doesn’t make me feel like me.’ So what does?”

I just feel like I’ve been playing dress-up in a women’s world my entire life.

“There’s a part of me that always wants feathers taped to my head, like Carrie Bradshaw,” Newham adds, in true Libra fashion (later, Newham confirms she’s a Virgo Moon and Sagittarius Rising.) “It’s just trying to find the balance between the glitz and glamor while still living my truth and being the person that I actually am on stage. Do I want to be this otherworldly creature? Or do I want to be myself?” At this stage in her career, Newham is opting for more of the latter, trading sequins for jeans at a recent show. “I can do less,” she says. “I can be myself. And that’s enough.”

Aesthetically speaking, Newham is embracing an image of comfort—but that doesn’t mean she’s eschewing style. At six-foot-two, she’s still finding new ways to champion tall queens in a way that works for her. “I spent my entire career looking around at my peers and idols—women who are five-foot-four and 100 pounds—and knowing I don’t look like them,” she shares. “I have to find a way to do things in my own way instead of trying to pretend like I’m something I’m just never going to be.”

The key? “Men’s clothes,” Newham reveals. “I just feel like I’ve been playing dress-up in a women’s world my entire life. I’m letting go of all that stuff. Now, I focus on what makes me feel really cool and really comfortable. And the way that people respond to me is so interesting. People will say, ‘Oh, I wish I was wearing that.’ Well, ladies, I’m on to something here!” 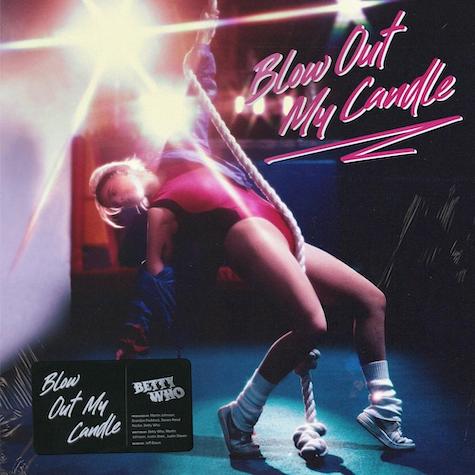 Image: Courtesy of Betty Who.

Newham’s next chapter mirrors this shift in style—both as a musician and as the host of a new Prime Video dating series, The One That Got Away, which features a mix of queer and straight couples looking for a second chance at love. “I’m preparing myself to have a shift in my career in whatever way that manifests,” she says of her new role on the show, which will mark the first time many viewers encounter her on their television screens. No matter the response—which, judging from the trailer, will be overwhelmingly positive—Newham is ready for the ride. “I have zero out. If everything went away tomorrow, or if I became the biggest star on the planet overnight, this is it,” she says, before miming a meditative perspective. “Like, this is my coffee mug. That’s my husband. That’s my dog. This is our couch. This is our house. This is the life that I am grateful for.”

Musically speaking, Newham is turning inward on her fourth studio album, which fans can expect by the end of 2022. Her first single off the record, “Blow Out My Candle,” is a triumphant pop ballad that sees her slamming the haters and supporting self-confidence over nostalgic ‘80s synths, just in time for Pride 2022. While the track marks a new “level of vulnerability” for Newham, she reveals that the rest of the songs on her upcoming record dive even deeper. “When I listen to the title track from the album, I think about me at 11 years old, who’s really who I wrote it for,” Newham teases. “Nine times out of ten, I get really emotional.”

It is completely okay to change your mind.

“I’m trying to be as vulnerable as possible, even when I stumble or even when I get it totally right. Both are valid,” Newham continues. “I’ve talked about that a lot in my music, but maybe never actually felt it for myself. And now, if I’m going to try and make people feel safe and comfortable, I have to be the most comfortable person on stage, creating space for that.” It took Newham most of her career to realize this kind of open-book artistry is a more authentic fit for herself—and now that she’s found it, she’s not planning on letting it go.

For her fans, many of whom are fellow members of the LGBTQ+ community, Newham hopes they can give themselves the same space to be exactly who they are, without limits. “Give yourself some grace,” she says. “Give yourself a little bit of time. Know that it is completely okay to change your mind. You can be one thing one day and something else the next.” At the end of the day, she says, “that is your right.”