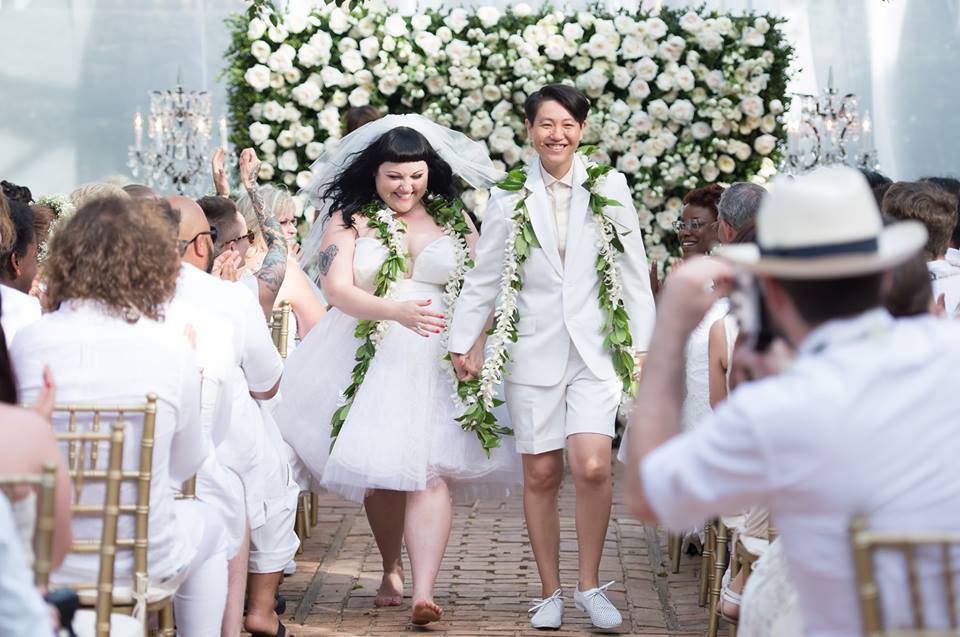 We ‘ll come out and say it: Beth Ditto is one of our favorite celebrities. The singer, best known for her work with beloved band Gossip, has always been an outspoken force in the industry. Even when she’s making controversial headlines (like for her drunk and disorderly conduct arrest back in March, when she ran around the streets shouting “Obama! Obama!”), her eccentric personality combined with her love of outlandish fashion and beauty is certainly contagious.

While generally spotted onstage in dramatic costumes, for her Hawaiian wedding to longtime girlfriend Kristin Ogata, Ditto opted for a simple and glamorous bohemian look. Wearing a stunning white Jean Paul Gaultier gown and no shoes, Ditto strolled down the aisle in front of her family and friends. Meanwhile, Ogata, Ditto’s former assistant, opted for a chic white shorts suit.

The band shared the above snap of the nuptials on their Facebook page, stating:

“At long last, now that we have returned home and recovered from all the amazingness and had some time to bask in the afterglow, we are exited to share with you a pic or two from Beth and Kristin’s wedding! So much love and appreciation to all of our family and friends who celebrated with us! And a huge thank you to Jean Paul Gaultier for the dream-come-true dress!”

This isn’t Ditto’s first time rocking the label. In fact, the singer opened the brand’s Spring 2011 fashion show back in October 2010, and has performed at his runways shows. Clearly, Gaultier himself has a soft spot for her.

Yesterday, he tweeted, “Congratulations to the newlyweds! All the best for Beth an Kristin! Love, JPG”

Congratulations to the happy couple—and if there’s one thing we can take away from this, it’s that Gaultier is always a good idea!