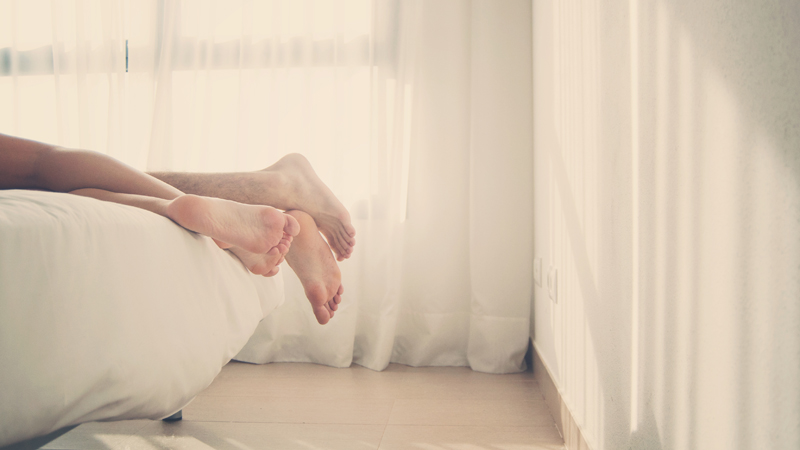 If you’re anything like us, you don’t need any extra excuses to get it on, but it turns out that certain moments can be even better than others for having sex. Total game-changer, right? Check out the best times ever to get busy:

1. Before a Big Presentation
Research shows that having sex calms nerves, lowers blood pressure and reduces stress. One study even found that people who had sex before a public speaking experiment were the least stressed!

2. In the Morning
Seriously, your body was made for morning sex. “Not only are testosterone and energy levels higher in the morning, but the increase in oxytocin levels keeps you and your partner bonded throughout the day while the endorphins boost your mood,” says sex expert Jessica O’Reilly, Ph.D. Not a bad way to start off your day, huh?

MORE: The 30 Best Movie Sex Scenes of All Time

3. When You’re Feeling a Little Under the Weather
It may seem counterintuitive, but studies show that having sex can actually boost your immune system. Okay, so you may not want to jump each other’s bones when you’re running a fever, but hey, it’s one way to prepare for flu season.

4. Day 14 in Your Cycle
A recent study found that around two weeks into your cycle, your clitoris grows up to 20 percent bigger and becomes engorged more easily. Translation: Your orgasm may be easier to come by on this particular day. This is right around the time that ovulation occurs, so it makes sense that your body would be craving more action on that day.

6. After a Bad Day
Want to shake off the stress of a tough day at the office? Sex might be a healthier choice than a couple of beers. “Studies show that sex and other forms of physical affection—even holding hands—significantly improve your mood and lower stress levels for days to come,” says O’Reilly. Plus, working out that tension and frustration in bed can actually make you more passionate and enthusiastic. “As long as your lover isn’t the source of your anger, angry sex can be red hot,” says O’Reilly.

7. When You Just Did Something Scary
One of the best times to get busy is right after an exhilarating experience, whether it be zip lining, riding a roller coaster, or even watching a scary move. “When your adrenaline is pumping, your body is already in a state of arousal and your sexual response is often heightened,” says O’Reilly. A study published in the Archives of Sexual Behavior confirms that attraction and desire are amped up after an adrenaline-boosting experience.

8. When You’re Having Insomnia
Some research indicates that sex can help you sleep better. In a British survey, one in six women reported sleeping longer and more deeply after getting busy. And if you’ve ever passed out mere seconds after an especially satisfying romp, you’ll know that an orgasm can be one of nature’s best sleep medicines.

MORE: Your Complete Guide to Sex Toys and How to Use Them

9. When You’re Feeling Insecure
There’s nothing quite like sex to draw us out of our heads (and neurotic thoughts) and get us right back into our bodies. So if you find yourself stressing about how you came off during that work meeting, or even whether your guy has noticed that you haven’t made it to the gym in two weeks, getting frisky can override that negativity. It allows you to focus on the pleasure your body gets from connecting with another’s—not to mention the pleasure it gives your partner! “The more we focus on what feels good, the less we think about what makes us feel bad,” says licensed marriage therapist Dr. Sheri Meyers. For more tricks on how to feel confident in bed, click here.

10. When You’re Hungry (and Dieting)
Sex releases a substance called oxytocin, which is known as the love hormone. In addition to turning your body’s focus to reproduction (hence the old saying about how having sex makes you want to have more sex), it can suppress your appetite. What’s more, if your oxytocin is surging, you’re likely to have less of the stress hormone, cortisol, which has been linked to cravings for fatty foods and carboydrates.