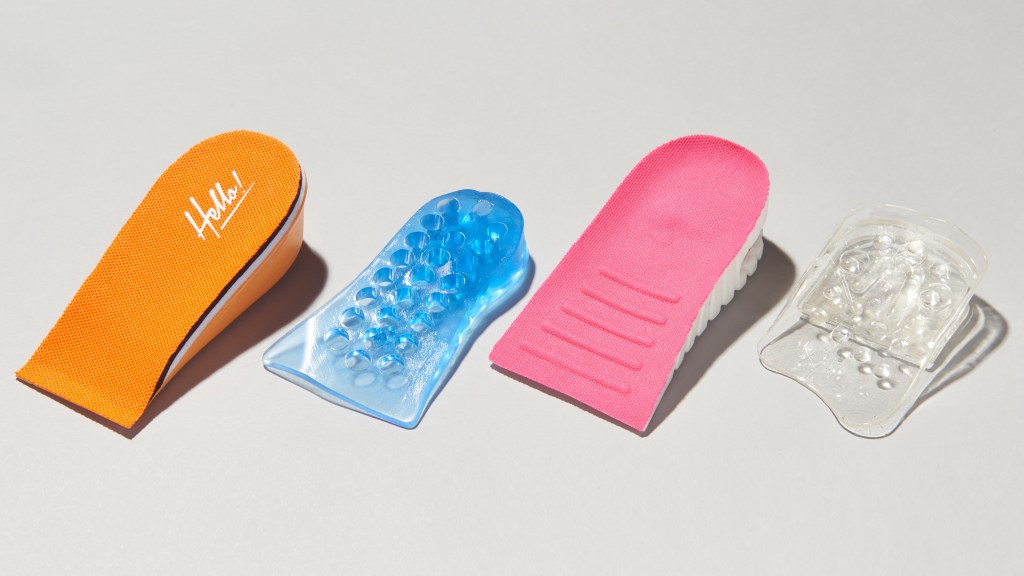 True story: When I was in ninth grade, my mom discovered I’d been stuffing every pair of boots I owned with three pairs of balled-up socks and wearing them to school like it was nothing. I remember her reaction clearly: a mix of disgust, worry, and confusion. “You’re going to kill your feet!” she said, before asking why I was doing it. I did it, of course, to look taller. I’m aware that jamming three thick white tube socks into each shoe sounds absurd—and uncomfortable, which it was—but it worked.

I’ve always had a thing about my height. Fine, more than a thing—it’s been my primary pain point when it comes to my personal assessment of my looks. I’m not short-short: After measuring myself last night, I’ve learned I stand at 62.5 inches—that’s five foot two and a half—but you’d think I was about three feet tall given the lengths I’ve gone for artificial inches.

In college, I wore heels to sight-see around Italy. My friends were all in cute flat sandals or sneakers, and I was so miserable by the end of the day that my BFF Alyssa graciously swapped shoes with me. At summer camp, I’d wear giant cork wedge sandals with pajama bottoms and a sweatshirt to breakfast at the dining hall. While on an impromptu getaway in Miami with my now-husband, I insisted on wearing such gargantuan heels out to a dark restaurant that I couldn’t walk without clutching his elbow; I ended up going down hard in the middle of Prime 112.

A lot of women wish they were taller, absolutely, but my fixation goes a little deeper. Without the help of a shrink, I’ve come to realize that I’ve always felt my personal worth was determined by my height. Like somehow I mattered less because I took up less physical space in the world. I also have a theory that short women aren’t taken as seriously anywhere, from trying to order a drink at the bar to rising through the ranks in a corporate setting. 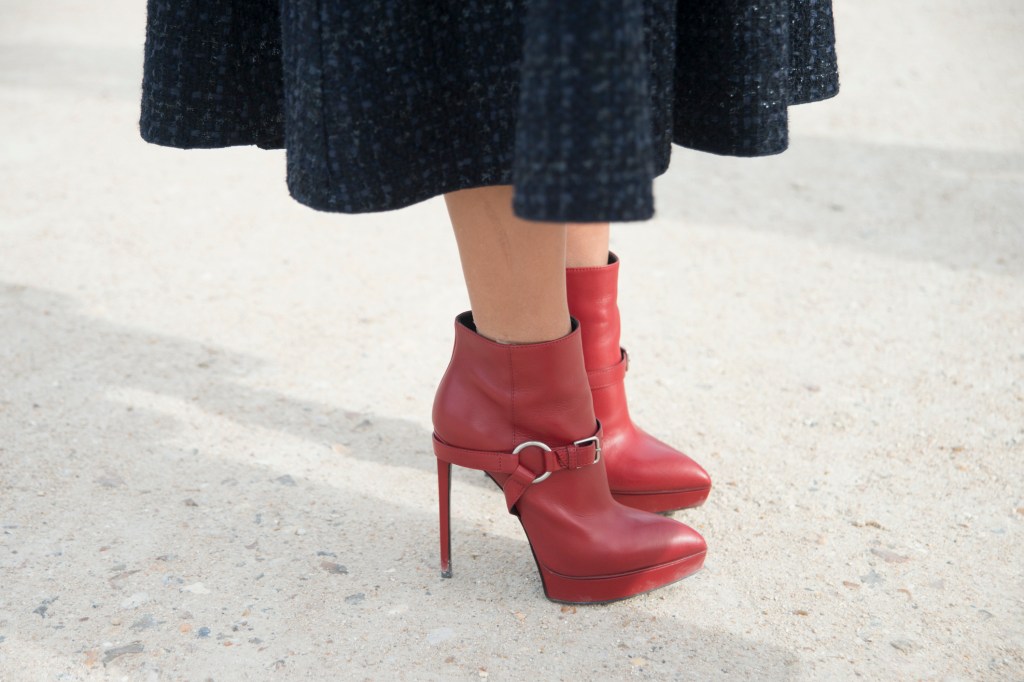 Running around during the day in six-inch heels just isn’t something I do anymore. (Getty)

I don’t exactly feel that way anymore—my teenage and young-adult insecurities have retreated as I’ve gotten older, and I’ve developed a personality and a skill set for which I’m taken seriously. And I certainly don’t wear high heels every day. They’re too much of a hassle to deal with in a city where I’m constantly running up and down subway stairs and walking three or four avenues at a clip.

That said, I also haven’t completely abandoned my issues. If you make me take my shoes off at your house, you’re basically dead to me, and I tend to stick to daytime shoes with a one- or two-inch boost. Maybe it’s a security blanket thing, but I like the feeling of being lifted, even a little. It makes me stand straighter, it makes my clothes look better, and it puts me a little closer to other women around me (according to studies, the national average height for females is 5’4″).

I also prefer the look of a lower heel these days. A one-inch Chelsea boot is so much more effortless than a four-inch stacked heel, and something like a flat moto boot adds a certain amount of toughness to my basic jeans-and-sweater combos. But, as I’ve said, issues are issues, and as much as I want to, I don’t love wearing flat shoes out socially when I know I’ll probably be the shortest girl in the room. Which is how I became intimately acquainted with the world of shoe lifts.

While there’s not a huge market for insoles that exist just for boosting height—most have varied orthotic properties—I’ve spent time tracking four down that do. Do they work? Keep reading. 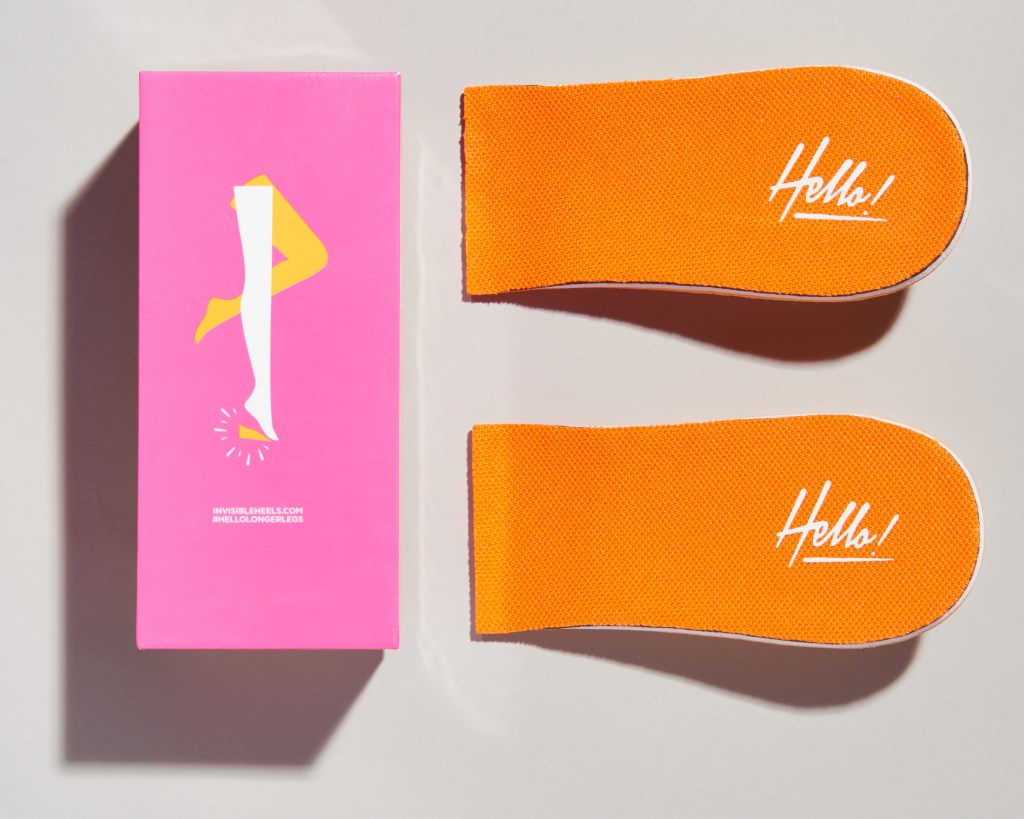 Say Hello to Longer Legs 2″ Invisible Heels, $24
These are the most “legit” of the bunch—meaning they’re the most fun to look at, the least clinical, and the only ones that seem to be expressly marketed to young, style-minded women. I was able to choose between three heights: 3/4 inch, 1.5 inches, and 2 inches. I obviously sprung for the two-inch soles, specifically designed to fit above-the-ankle shoes including, according to the site, “Ugg Boots, Hunter boots, leather boots, and high-top sneakers.”

As soon as they arrived (in a super-cute neon pink–and-orange box), I ripped them open and slid the soles into a pair of clog-heeled Uggs that I wear all winter (yes, I love them; get over it). Unfortunately, they were bulky and stiff and took up so much space in my shoe that my foot couldn’t fit on top.

Annoyed, I tried shoving them into a pair of all-black Converse high-tops, and while I had a little more room to squish my foot in—Chucks are flimsy AF—you could definitely see that something was stuffed inside my shoe. Ugh, even my high school sock method was invisible.

I think the trick here would be inserting them inside boots or sneakers that were half a size to a size too big. They clearly didn’t work for me in shoes that fit and weren’t bendable, so I wasn’t able to force them in. Next! 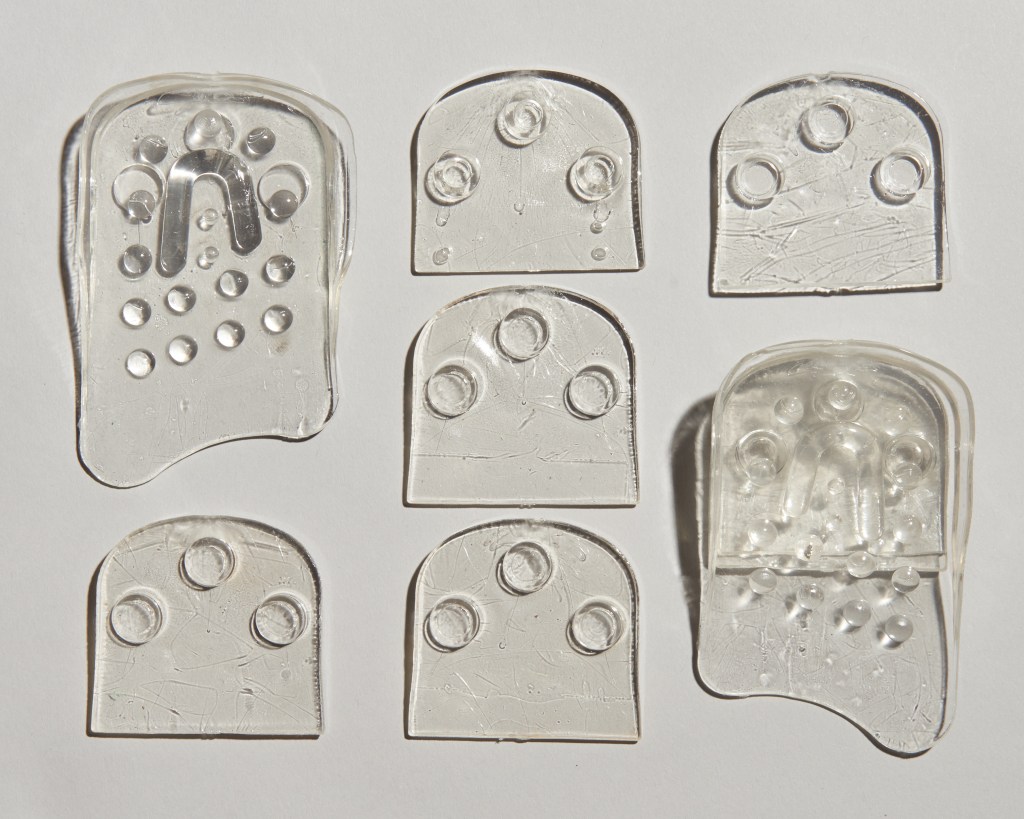 5-Layer Silicone Gel Inserts, $3.44; at Amazon
As someone who generally doesn’t believe that price is associated with quality, I was psyched that achieving height nirvana might cost less than a Venti Starbucks blonde roast. These arrived from a third-party Amazon seller in a clear plastic bag with 10 different pieces, meant to be customized and stacked to reach two inches total.

After futzing with them for a few minutes, I got frustrated. Each layer was made from thin rubber, and I had a hard time figuring out how the smaller layers stacked into the larger ones, ultimately just piling them on top of each other and sticking them inside a pair of flat Harley Davidson leather moto boots.

Sure enough, the fact that I couldn’t get them to attach to one another made this set pretty unworkable—they didn’t stay put, and I found the five layers to be way too bulky when zipped inside my shoes. However, I had better success when I stacked only two layers and placed them into something totally flat, like sneakers, giving me about a three-quarters– to one-inch lift.

Bottom line: You do get what you pay for in this case. While they might work in a pinch, they’re not intuitive or ideal. They don’t click into each other as well as the site makes it seem. I don’t think I’ll be using these again. 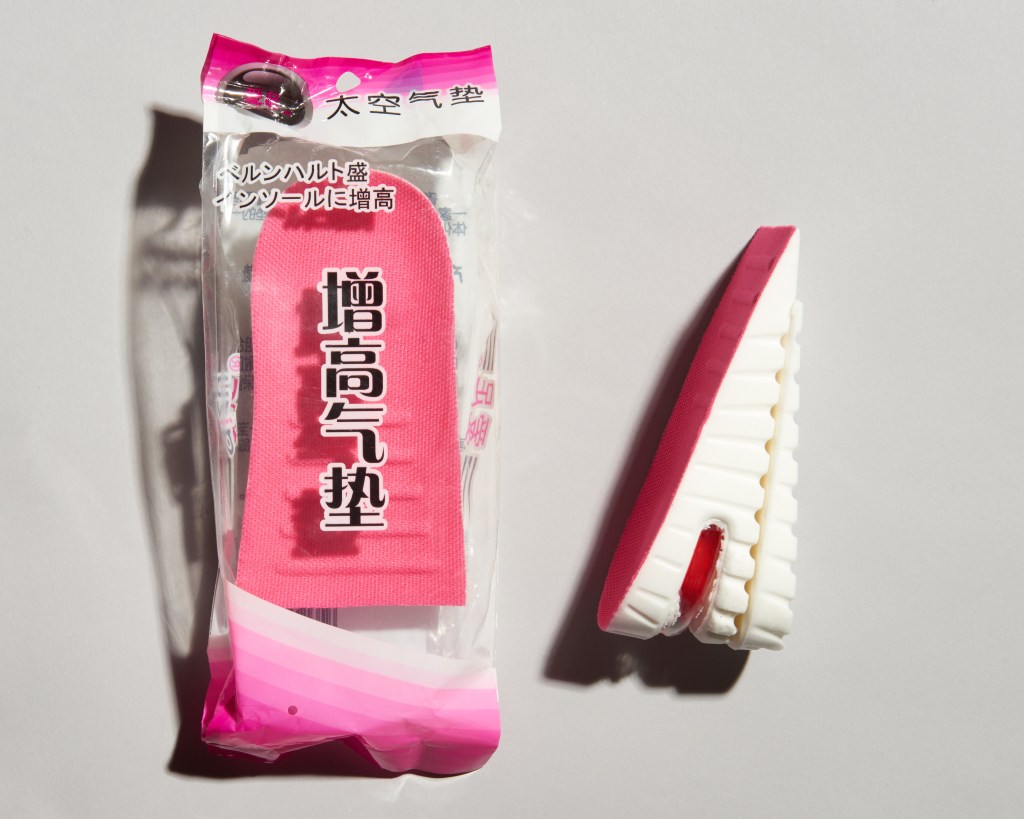 Tasharina White Height Insoles Double Layer Heel Lift Pads for Woman, $9.27; at Walmart
Apparently Walmart, like Amazon, works with third-party vendors, because these arrived from China. Although I was excited for their Nike-esque sole and gel bubble, I found these to be another disappointment. Like Say Hello to Longer Legs, these soles were way too cumbersome to insert into a shoe that fits. I do think they would have worked well on a slip-on, roomy boot, like an Ugg, but I couldn’t zip up any pairs I tried that had these and, critically, my foot. 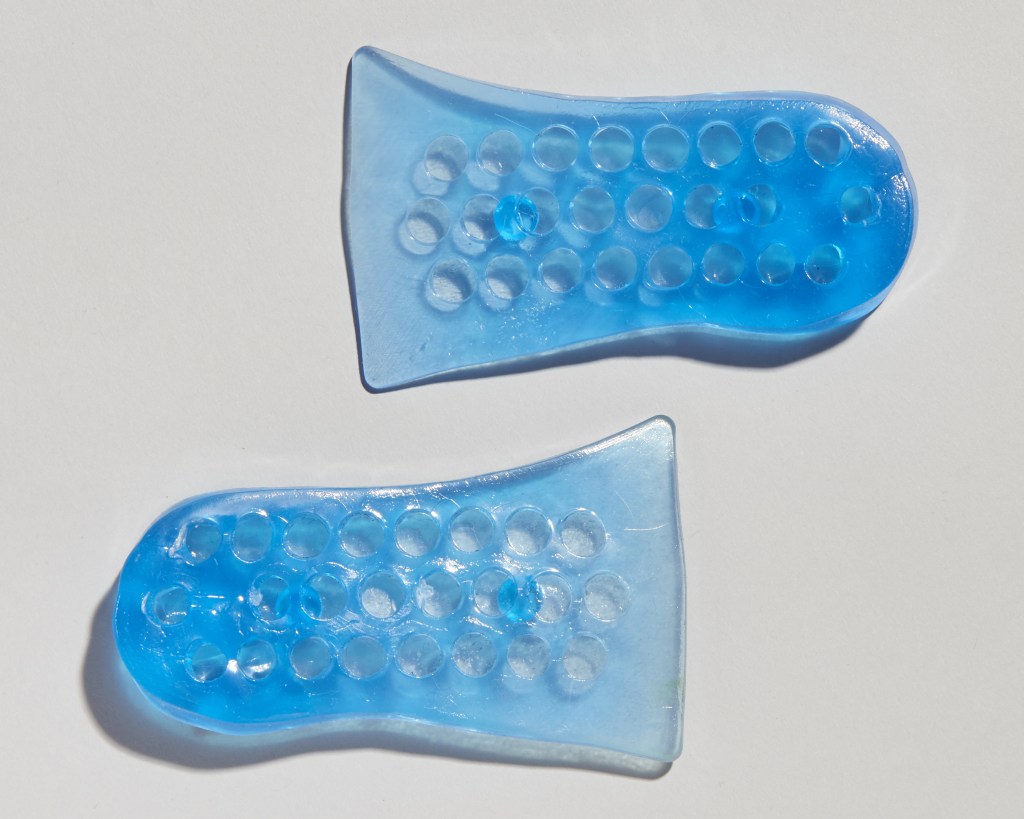 Kalevel 2.4-inch Silicone Insole Shoe Lifts, $16.99; at Amazon
I tried these last. Needless to say, I didn’t have incredibly high hopes, but I was pleasantly surprised. Like the clear rubber pack of ten, these also came with a handful of stackable pieces (six in total) for a maximum boost of 2.4 inches. Again, I had a hard time understanding how they fit together, so I started using just one individual piece inside a pair of brown suede Chelsea boots. At about a half-inch each, these slide inside my shoes nicely, are very pliable, and really do make me a little taller.

With these, I’m able to stack two pretty comfortably without them being visible, but I will admit that doubling up makes my posture pitch forward a bit, which isn’t the most natural. Still, these are far and away the winner, and I keep them in my bag at all times if I’m not wearing them, because you never know when you’ll need to grow two inches taller in a matter of minutes.

So … are shoe lifts a flawless way to appear taller without resorting to running around in heels 24/7? Eh, not really. Most aren’t streamlined enough to look natural, nor do they fit inside shoes all that easily. But until scientists discover a pill that’ll add inches to your height, I’m game to keep trying.