Most of us who live and work in the real world are quite familiar with LinkedIn. It’s the professional world’s answer to things like Facebook and Twitter: instead of a networking site for the sake of being social, it’s a networking site in the more traditional sense: designed for professionals looking to make important career connections.

As such, it doesn’t necessarily seem logical that celebrities and other famous names of extremely high stature would ever need a LinkedIn profile. And yet, there are plenty of big names on LinkedIn, flying under the radar and getting lost in the shuffle of the average Joe or Jane who has 500+ connections. Perfect example: basketball player and general all-around badass Shaquille O’Neal just joined the site this week.

There are many more, too. Read on for the 12 famous people with the best LinkedIn profiles! (Ed. note: Unlike Twitter, LinkedIn doesn’t yet seem to have an “verification” process by which celebrity accounts can be authenticated. Thusly, we can’t confirm if all of these are legitimate; but that doesn’t make them any less awesome.) 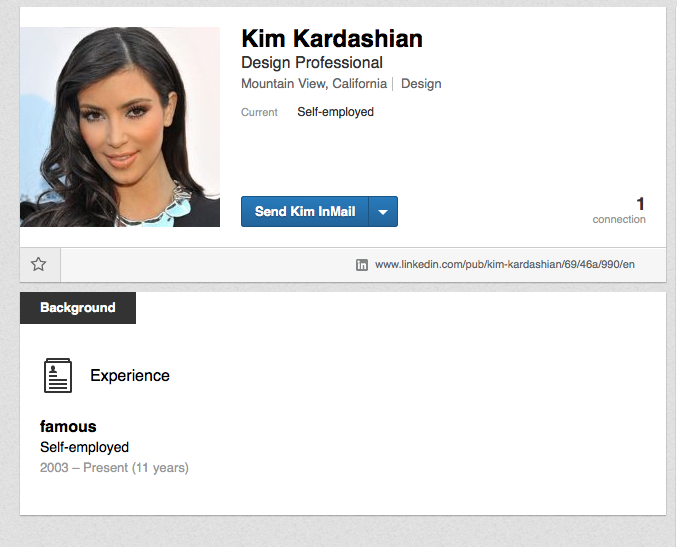 The best thing about Kim Kardashian’s LinkedIn page is that she has labeled herself as a “Design Professional.” Also, weirdly, she only has one connection. 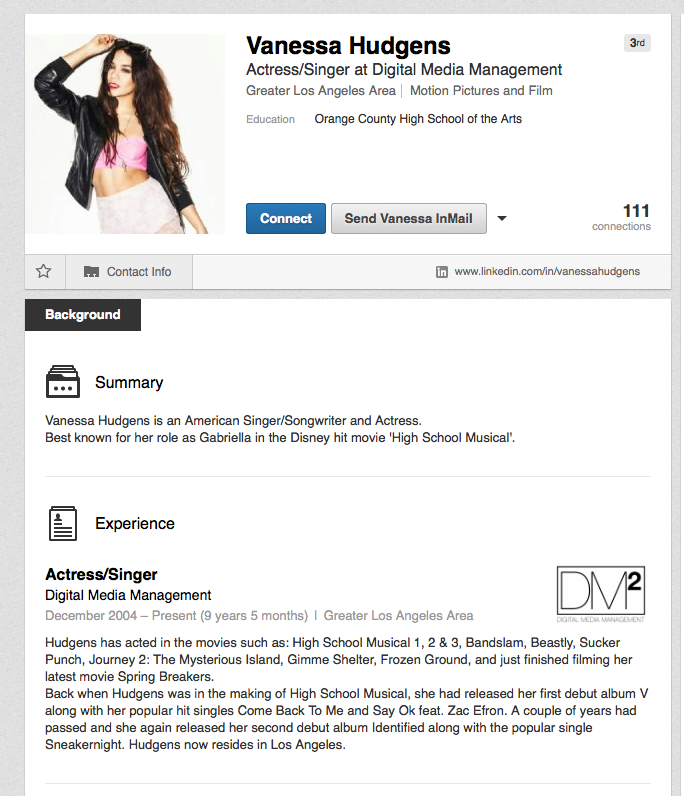 Interestingly, Hudgens is one of those rare celebrities whose LinkedIn profile is actually filled out to the max. It seemingly hasn’t been updated since before “Spring Breakers” came out, but we’ll forgive her for that oversight.

Shaq made the somewhat odd decision to keep his profile private, including his full name. For anyone not already connected to him, his name shows up as “Shaquille O.,” which is just hilarious. His top title is “CEO/President, Alot of Different Companies.” Also hilarious.

You really wouldn’t think the President of the United States would need a LinkedIn profile, but nonetheless, he has one. Unlike Facebook, where most celebrities have official fan groups that are open to the public, LinkedIn profiles are private unless otherwise denoted; Obama’s still requires that you “connect” with him in order to see his full page.

The former Vice Presidential candidate came under a lot of heat for posting her resume to LinkedIn back in 2009, when the networking site was still very young. Now, her profile is more rudimentary, but she kept it as-is up until at least 2011, when the following phrasing was included to conclude her profile: “My fellow Americans, come join our cause. Join our cause and help our country to elect a great man the next president of the United States. And I thank you, and I — God bless you, I say, and God bless America. Thank you.” That is barely English. 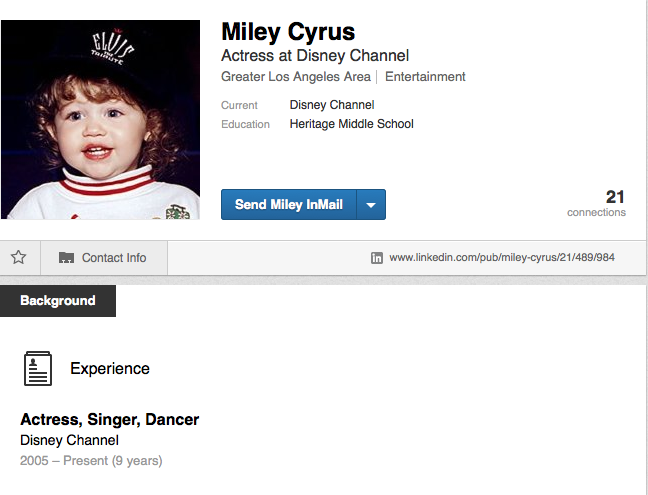 Miley Cyrus’ LinkedIn profile seemingly hasn’t been updated since her days on “Hannah Montana.” She only has 21 connections, but her profile picture is pretty much the best. 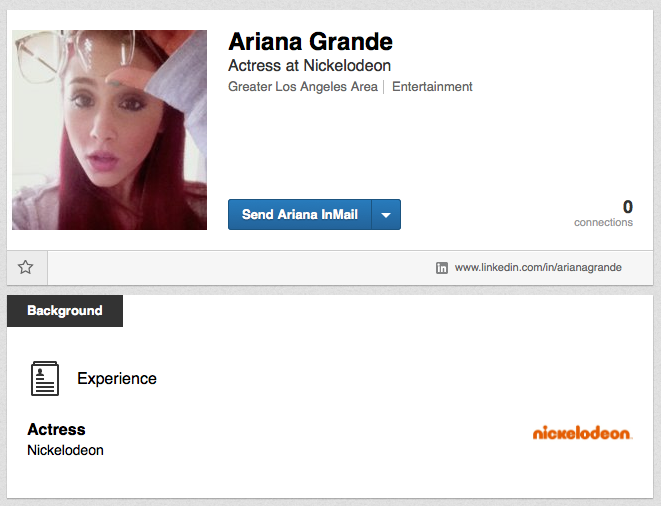 The 20-year-old’s LinkedIn profile is pretty sparse, aside from a reference to her role on Nickelodeon and one emo-looking selfie. 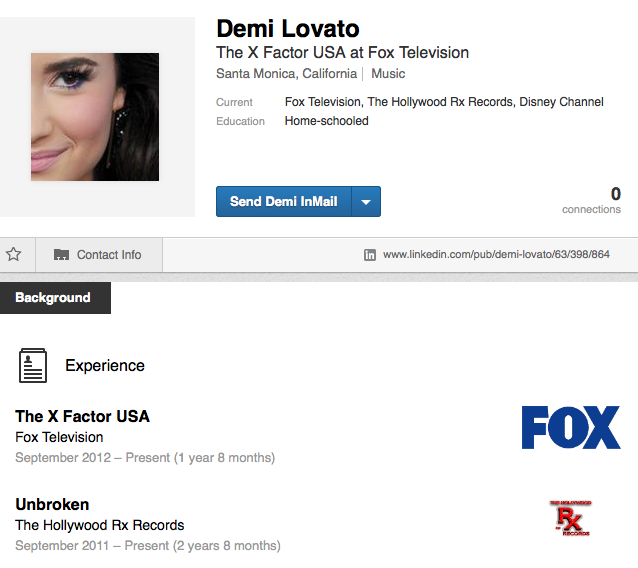 By contrast, Demi Lovato’s LinkedIn profile is very thoroughly filled out, going all the way back to her days starring on “Barney and Friends.” She still doesn’t have any connections though. 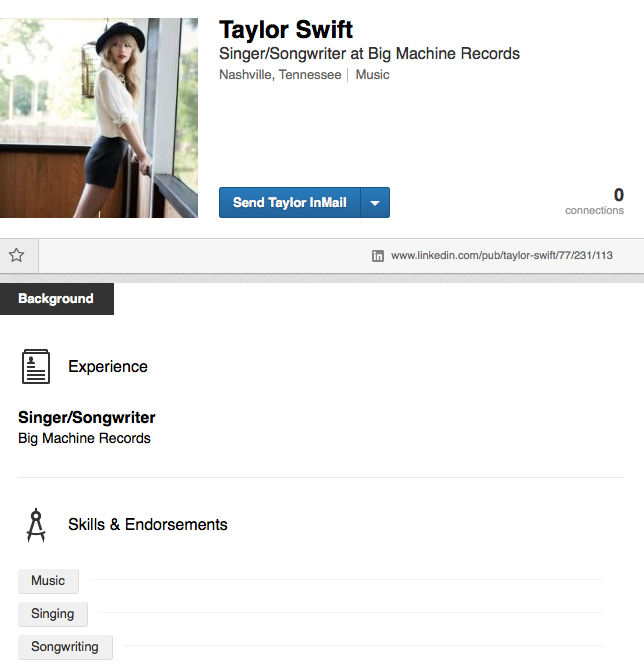 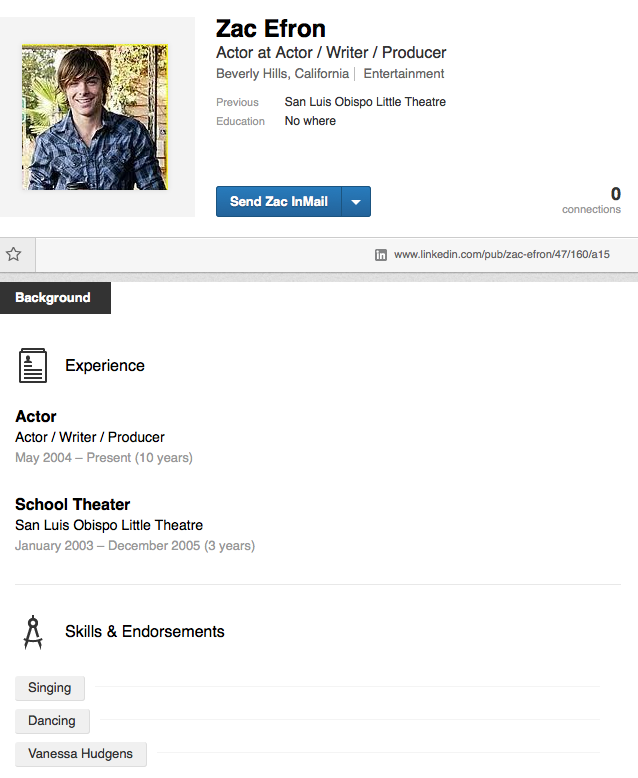 Strangely, one of Zac Efron’s listed “skills” is “Vanessa Hudgens.” We guess so? 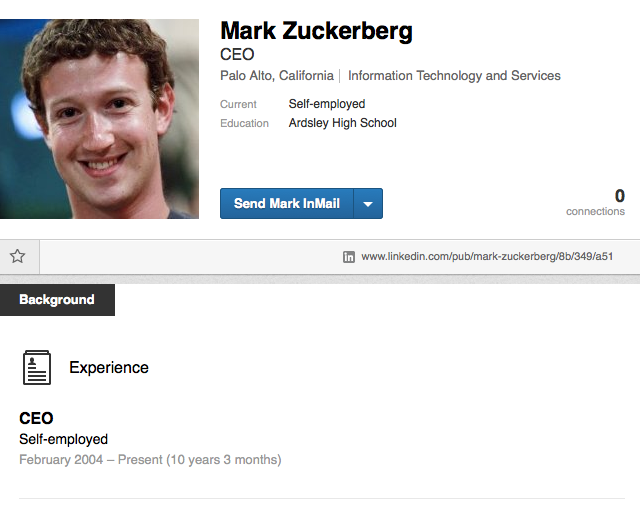 C’mon, Mark, there’s no need to rub in the fact that you are “CEO of Self-Employed” even more. 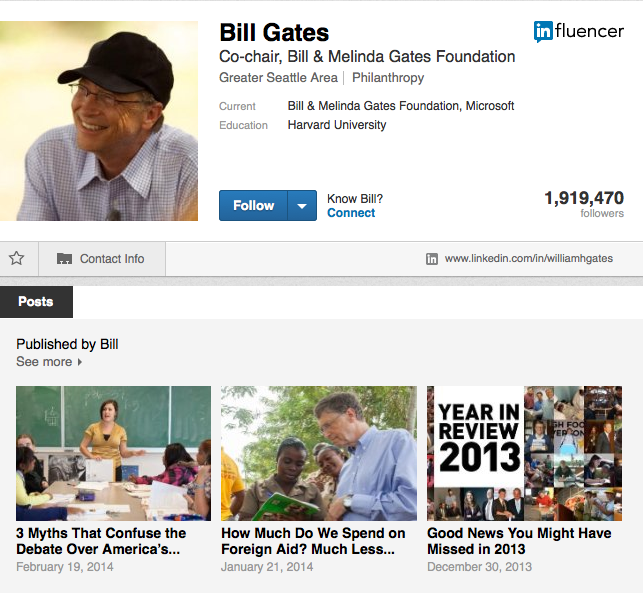 Bill Gates, the founder of Microsoft, is probably one of the most legit people on all of LinkedIn. He’s called an “Influencer” by the site and has nearly two million followers.