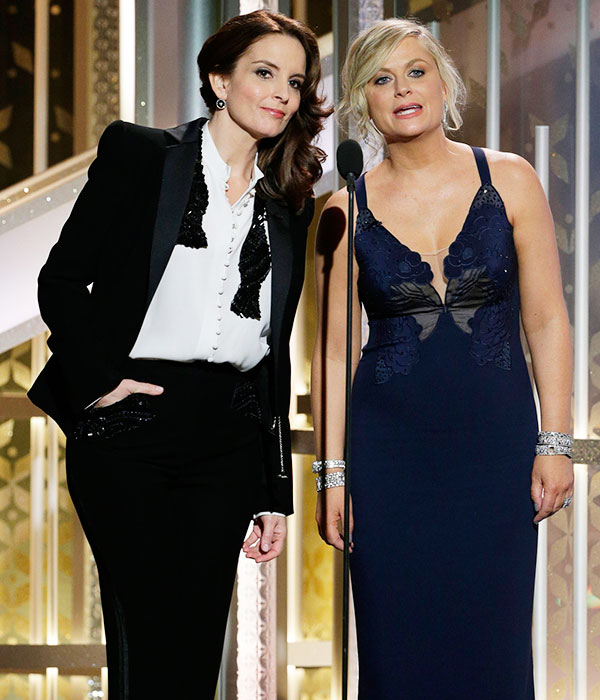 Funny ladies Tina Fey and Amy Poehler pretty much owned the show at last night’s Golden Globes. It was the duo’s last go at hosting the telecast, which was continuously pointed out on Twitter and on the red carpet, that meant the zany pair couldn’t get fired—no matter what they said. This lead to one thing: Seriously LOL-worthy viewing.

While the red carpet fashion was fun to watch, and there were plenty of awkward moments, Fey and Poehler’s comedic quips were without doubt the highlight of the night. In case you missed it (or, like us, can’t get enough), we rounded up eight of their best zingers from the evening.

1. They didn’t let that whole backing-down-to-North-Korea thing slide: “Tonight we celebrate all the television shows that we know and love, as well as all the movies North Korea was okay with . . . North Korea referred to “The Interview” as ‘absolutely intolerable and a wanton act of terror.’ Even more amazing, not the worst review it got,” Tina said.

2. They played a game of would you rather to prove they have totally opposite taste in men:

Tina: “Would you rather Colin Farrell or Colin Firth?”

Tina: “Firth for a polite amount of time.”

3. Would it be an awards show without mentioning the fact Meryl Streep always walks away with the prize? Nope: “‘Into the Woods’ stars Meryl Streep. Meryl plays a witch who sends the townspeople on a magical quest to collect the items she needs to win another Golden Globe.”

4. One of our favorites, was this clever quip about Amal and George: “George Clooney married Amal Alamuddin this year. Amal is a human rights lawyer who worked on the Enron case, was an advisor to Kofi Annan regarding Syria and was selected for a three-person U.N. commission investigating rules of war violations in the Gaza strip. So tonight, her husband is getting a lifetime achievement award.”

6. They said what we all were thinking.

Amy: “Jennifer Aniston is here tonight nominated for the film ‘Cake.’ We should explain that to the Hollywood people in the room: Cake is like a fluffy dessert that people eat on their birthday.”

Tina: “And birthdays are things people celebrate when they admit that they have aged.”

7. When the topic got heavy, they lightened the mood: “The movie ‘Selma’ is about the American Civil Rights movement that totally worked and now everything’s fine.”

8. Neither were afraid of some seriously awkward laughter, bringing up Bill Cosby’s sexual assault allegations: “In ‘Into the Woods’, Cinderella runs from her prince, Rapunzel is thrown from her tower for her prince and Sleeping Beauty just thought she was getting coffee with Bill Cosby.”

Best hosts ever, right? In case you missed it last night, watch Tina and Amy’s Bill Cosby bit here-we really can’t get enough of these two.