And we’re off! Awards season is officially underway, and while we’ll certainly be analyzing everyone that graces the various red carpets, we’ve decided to turn a more critical eye on 10 specific actresses we’re betting will make a splash all season.

Last week, we highlighted exactly who we’ll be watching, and why we’ll be watching them (see our full primer here), and now we’ll take a close look at how they did at the Golden Globes, fashion-wise. 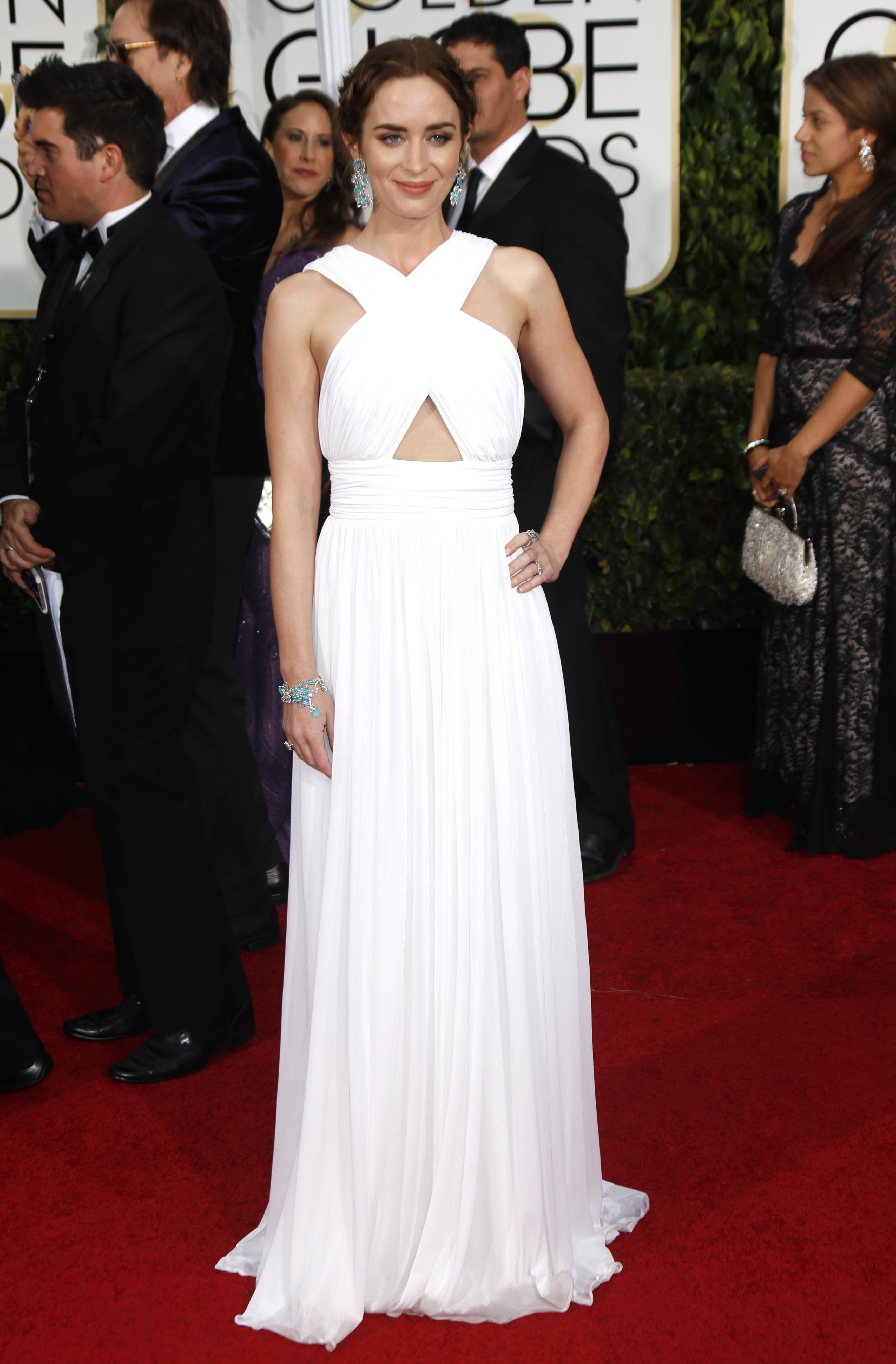 1. Emily Blunt
We knew the “Into the Woods” nominee would wear something killer—during the movie’s press tour she upped her game with high-style looks by Dolce & Gabbana, Lanvin, and David Koma—and she certainly did. While her grecian white custom Michael Kors gown was a bit more understated than we expected, it looked ethereal—especially with her braided updo, simple makeup (by Kiehls, by the way) and jaw-dropping statement earrings. Here, Emily proves you don’t need to show up to a carpet with your boobs out or shimmering in head-to-toe sequins to get the world’s attention.
Grade: A 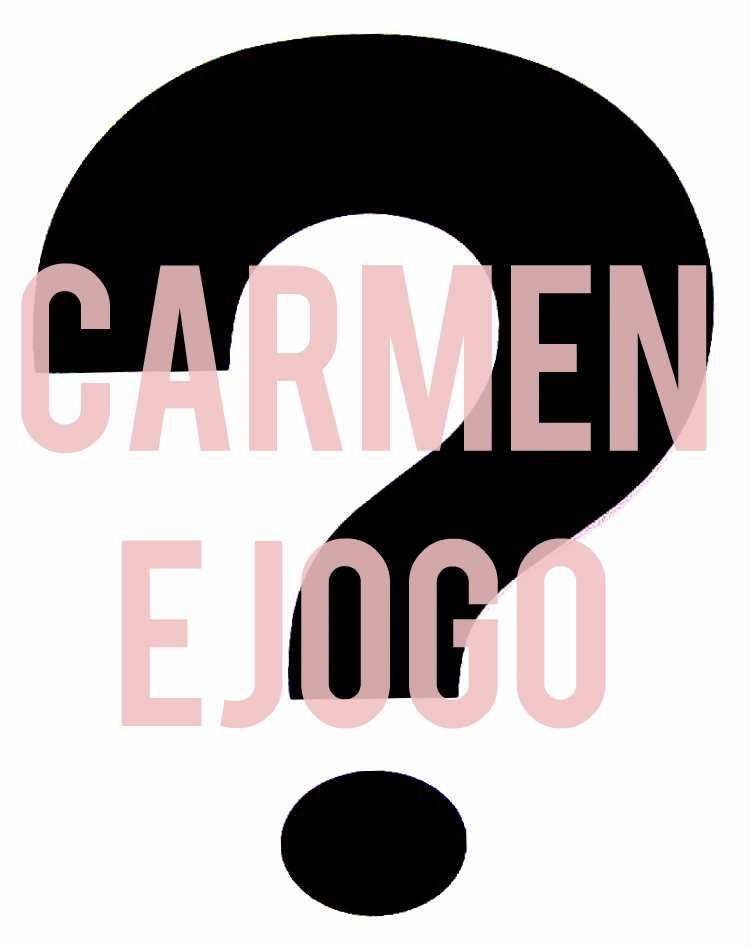 2. Carmen Ejogo
We called out the “Selma” star as one to watch—she’s in one of the year’s biggest films, which we thought meant she’d be will be front and center at every upcoming awards show. Oddly enough, there aren’t any pictures of the 41-year-old British beauty, and we didn’t see her on the carpet, so we have no choice but to give her failing grade. Miss the midterm, miss your chance for an A. 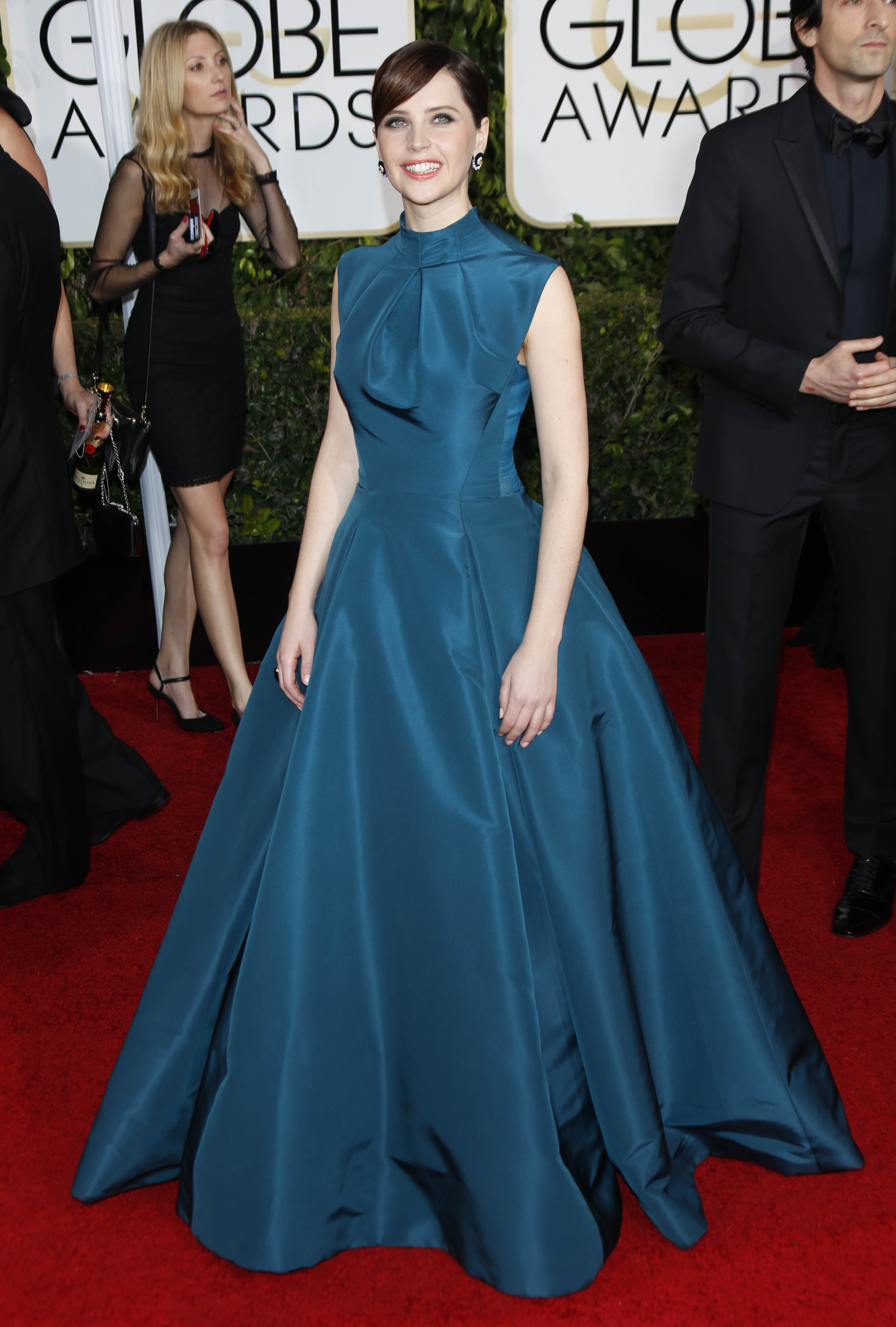 3. Felicity Jones
Currently receiving raves—and nominations—for her turn as Jane Wilde Hawking  in “The Theory of Everything” opposite Eddie Redmayne, the 31-year-old English actress has also quietly established herself as an elegant red carpet presence.

While her teal Dior gown wasn’t a fail, per se, we would have liked the 31-year-old to choose something a bit more modern and youthful. We also would have liked to see her in something more form-fitting as this looked a little too big on her petite frame. While her side-parted updo would have looked chic with a less staid dress, we find it a little stiff.
Grade: C-

4. Keira Knightley
We were excited to see what fashion It-girl Knightley wore for a few reasons, namely thats she’s been absent from red carpets for a while, and because she’s pregnant. We’re pretty torn on her Chanel dress: One the one hand, well, it’s Chanel and took 30 people to make. On the other, it seemed a bit ill-fitting, and the cotton-y bib and ruffles were a tad “Prairie Home Companion.” We did love the beaded butterflies and matching bag, so we’re giving her a pass—but barely.
Grade: D+ 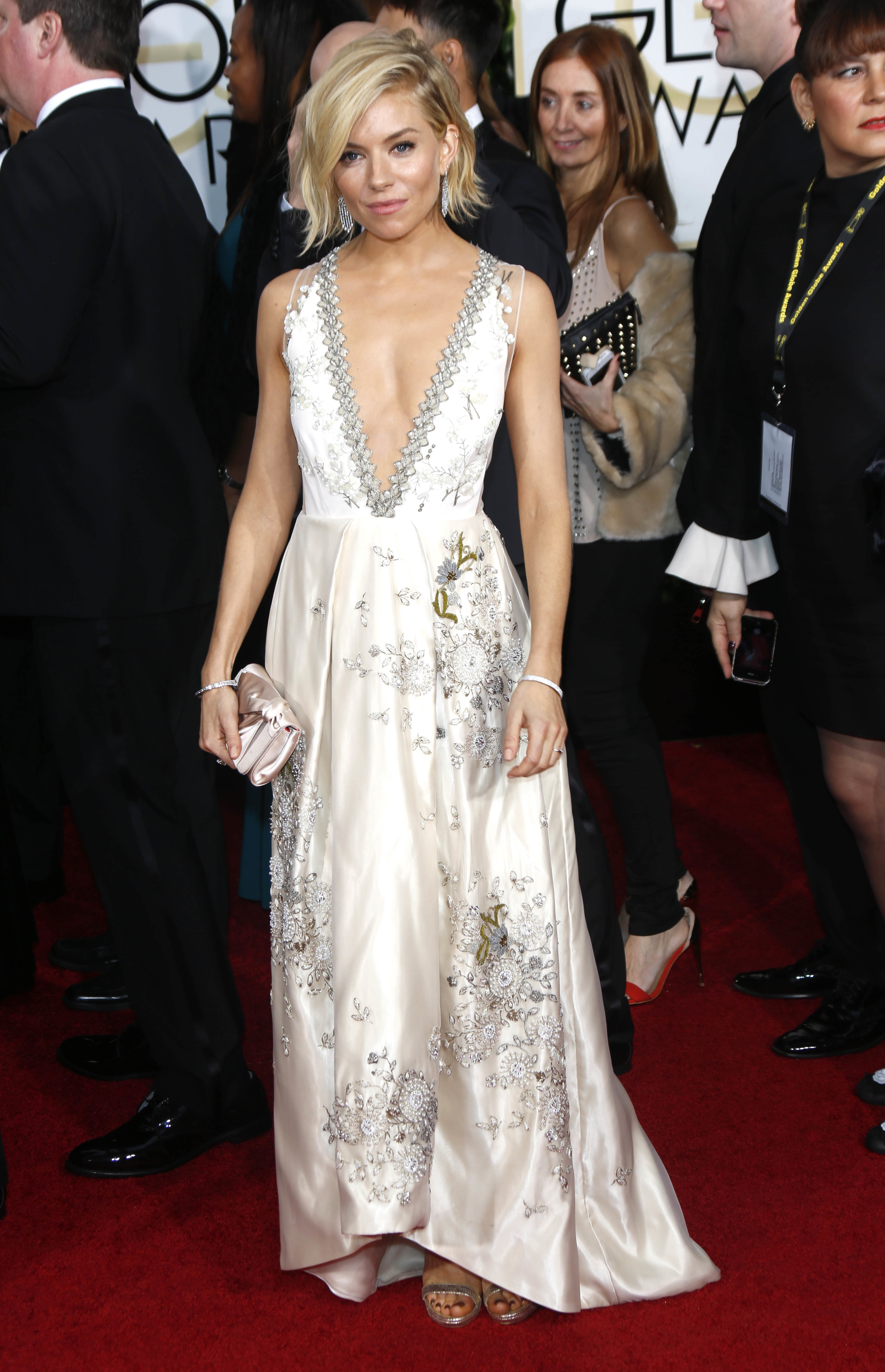 5. Sienna Miller
At very first glance, we were kind of underwhelmed by Miller’s pale beaded Miu Miu gown, but the more we paid attention, the more we started to appreciate how well it fit her body, and how her short chop added just the right amount of edge. If she’d had long flowing extensions, we may have given the look low marks, but her hair made her one to remember.
Grade: B+ 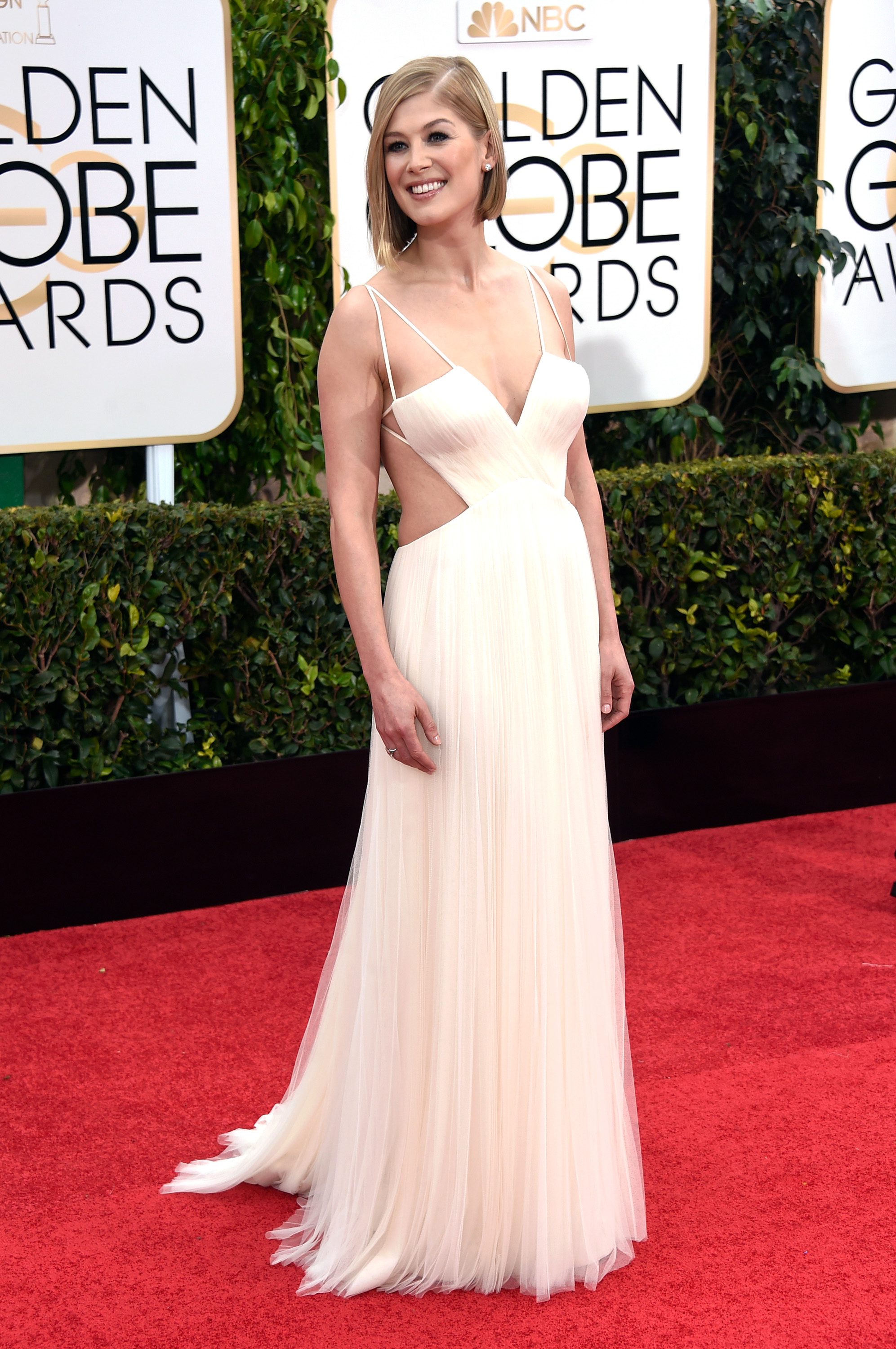 6. Rosamund Pike
Here’s the thing: Pike’s white Vera Wang gown was sexy, sure, but it was also a tad ill-fitting and just didn’t feel like her. The “Gone Girl” nominee has sort of established herself as a sophisticated red carpet presence, often choosing covered up fashion with a capital F—McQueen, Altuzarra, Giambattista Valli, Dior—so it felt off that she’s wear a gown as revealing as this for her first nomination.

However, it did get people talking—Pike gave birth just five weeks ago—and while her body looked amazing, we couldn’t help but think the dress didn’t flatter her as much as another would.
Grade: B-/C+ 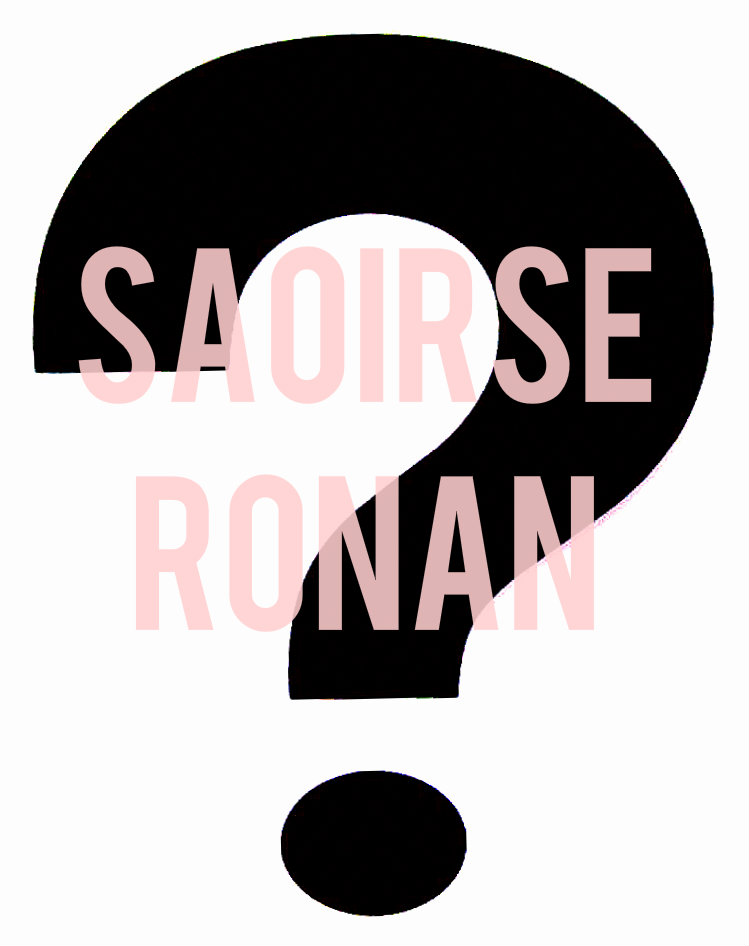 7. Saoirse Ronan
We were depending on the 20-year-old to bring a dose of youthful spunk to the red carpet, especially given her role in Wes Anderson‘s Globe-winning flick “Grand Budapest Hotel” but like Carmen Ejogo, no photos exist of Ronan. A real bummer, because during the promotion for “Budapest,” she stunned in Valentino, Proenza Schouler, Chanel, and Narciso Rodriguez. 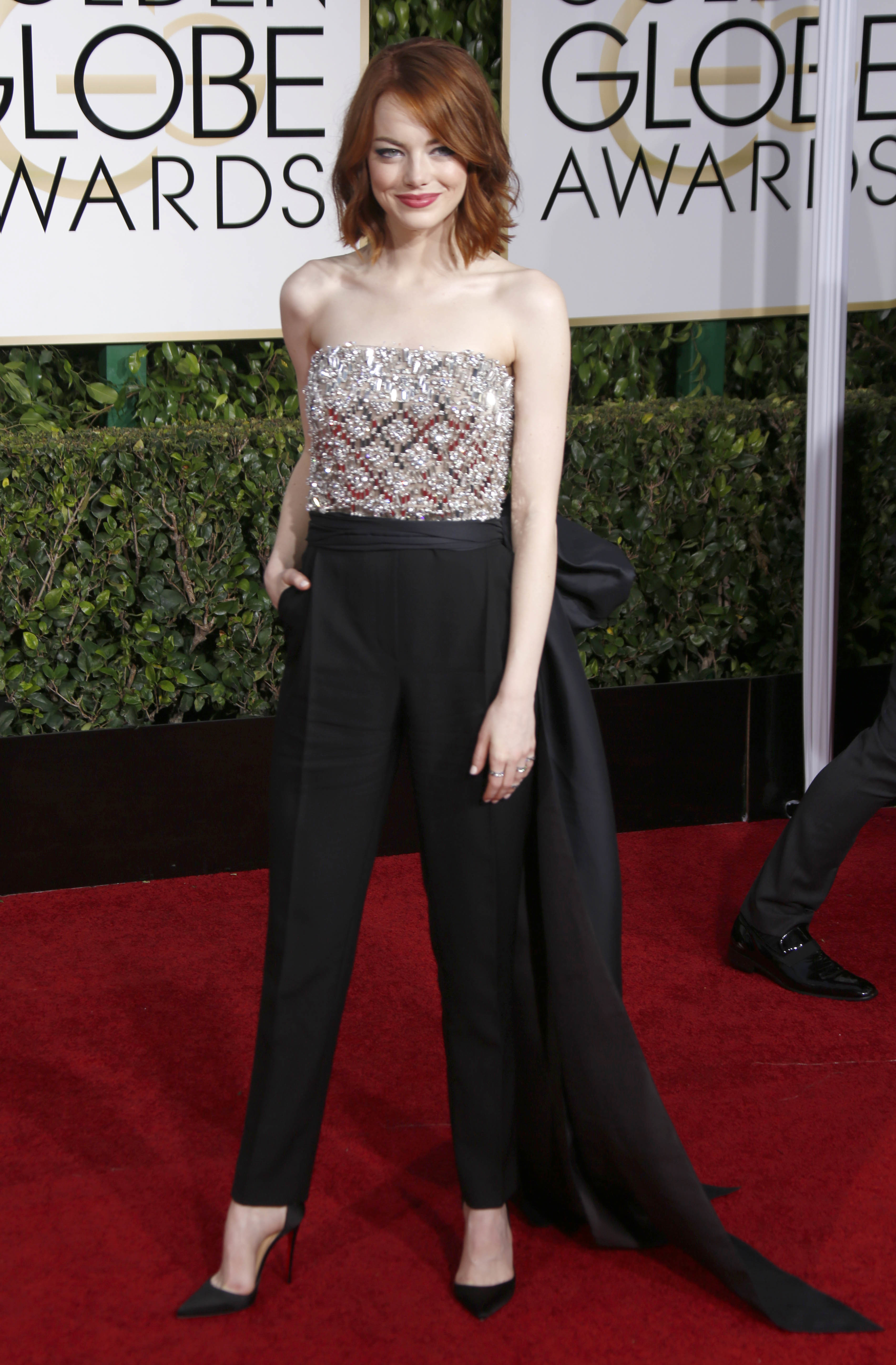 8. Emma Stone
Cheers to Emma for looking festive and appropriate but also insanely modern. Her Lanvin jumpsuit was perfect—the strapless gold beaded top was special, while the sleek black pants and dramatic sash made her stand out from the fray of gowns. Factor in her low-maintenance wavy bob and unfussy makeup, and you’ve got a red carpet winner.
Grade: A+ 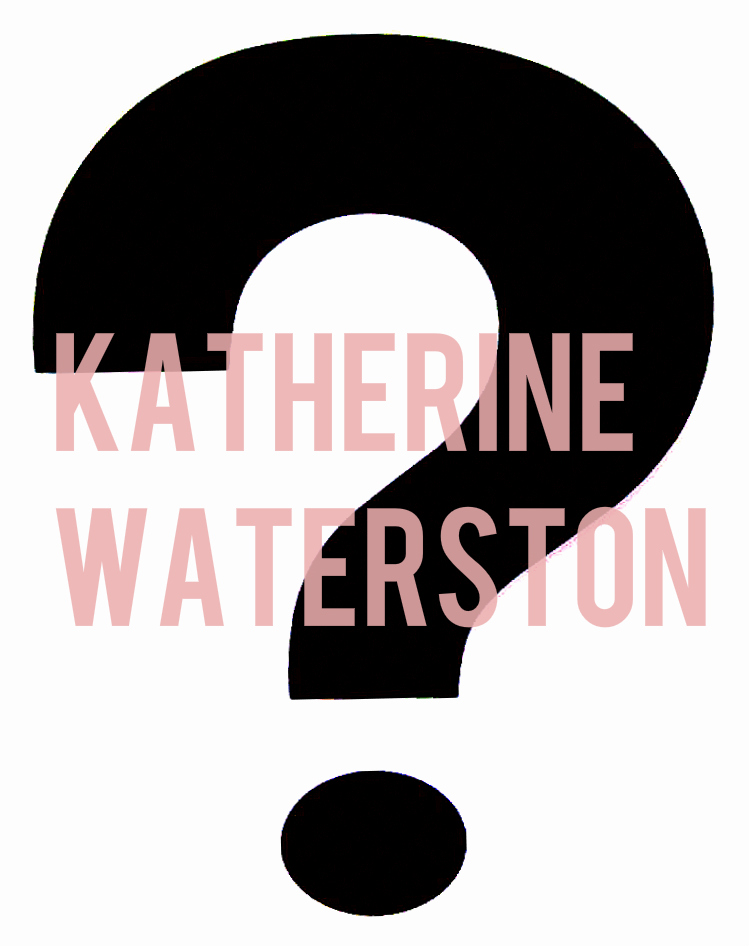 9. Katherine Waterston
What the hell?! We were sure the 34-year-old—who officially became a star to keep a close eye on thanks to her super-sexy leading role in Paul Thomas Anderson’s eccentric 1970s-set “Inherent Vice”—would wow on the red carpet, thanks to her recent New York Times profile that crowned her a fashion It-girl, but no photos exist. Again, no choice but give her a failing grade. 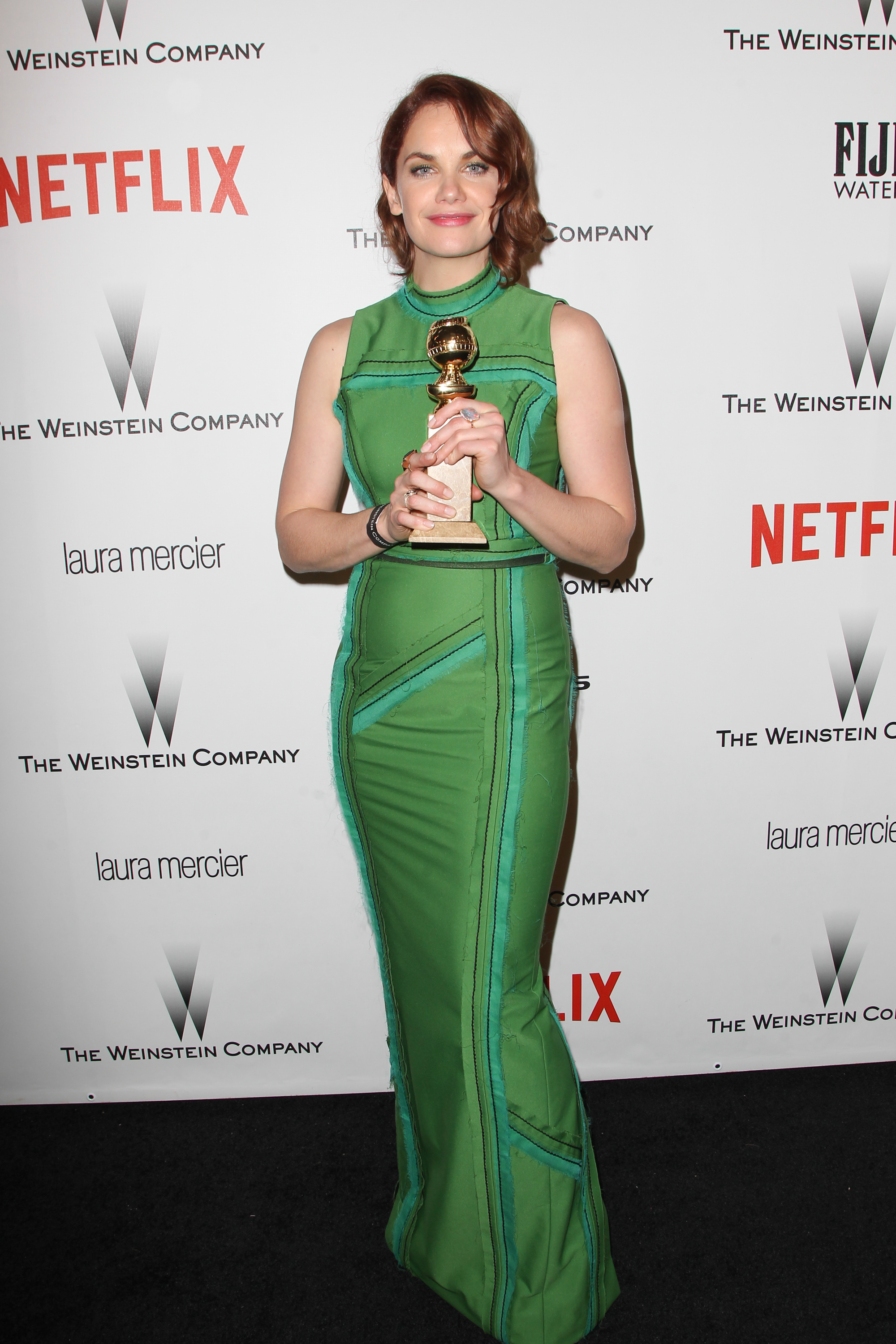 10. Ruth Wilson
There’s no denying that “The Affair” star (and Golden Globe winner) is cool enough to pull off Prada, but it looked to us that she found this green gown in a thrift store, or borrowed it from Carol Brady.
Grade: C-/D+

THE WINNER: We herby declare Emma Stone the red carpet champion of the 2015 Golden Globes, with Emily Blunt mere inches behind her. Congrats, ladies!