Since Law & Order: Special Victims Unit premiered more than 20 years ago, fans have wanted to know: When will Benson and Stabler get together? (Spoiler alert: It may be sooner than you think.)

Mariska Hargitay and Christopher Meloni made their debuts as Detectives Olivia Benson and Elliot Stabler in season 1 of Law & Order: SVU in September 1999. The two starred together on SVU for 12 seasons until Meloni left the series in 2011. In 2020, Meloni reprised his role as Stabler as the lead of the SVU spinoff, Law & Order: Organized Crime, which saw him and Hargitay (and Benson and Stabler) reunite and cross over on each other’s series. Season 1 of Organized Crime also saw Stabler—who is single after the divorce and death of his wife, Kathy—tell Benson, “I love you,” which led fans to wonder if Stabler and Benson will—finally—get together after more than two decades on screen.

Will Benson and Stabler get together on Law & Order: SVU?

So…will Benson and Stabler get together on SVU? Anything is possible, at least according to Hargitay herself. In an interview with TODAY on September 23, 2021, Hargitay confirmed that there’s a romance “percolating” ever since Stabler and Benson reunited in season 22 of SVU and season 1 of Organized Crime. Whether they’ll be an official couple or not, only time will tell.

“It’s all underneath percolating,” Hargitay said. “We’re trying to, right now, after Stabler being gone for 10 years and the way that he left and the complexity of what’s happened and how he came back surprising me, we’re still finding our way. But it’s complex and real and I think what I love about it most is that it’s earned. This relationship is truly earned. Not a lot of people have a 23-year relationship on film.”

As for the relationship between her Meloni, Hargitay described her bond with her co-star as “an instant, instantaneous connection that is inexplicable, that has only grown, and I look at it as a gift.” When asked if she and Meloni ever dated in real life, Hargitay joked that the two went out for four years and “just broke up.” Meloni also quipped, “Don’t tell our spouses.” 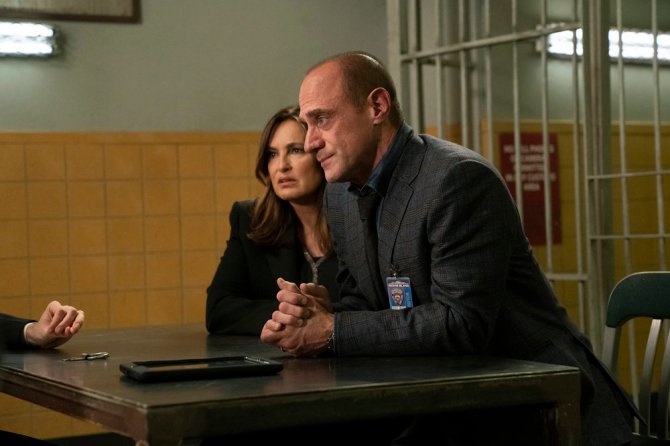 Meloni was also asked about Stabler telling Benson “I love you” in season 1 of Organized Crime, to which he explained that the L bomb was due to the “emotional distress” he was under.  “I was saying it because it was in the midst of an intervention. My family was coming together with the help of Olivia Benson for an intervention. One of my daughters said ‘I love you,’ but I was looking at Mariska. How could you not?” he said.

In an interview with E! News in May 2021, Meloni was also asked whether Stabler’s “I love you” to Benson was a romantic or friendly “I love you.” “I really mean this, I’m not being queer or cagey, I just think it’s unfair and outside my scope to answer that,” he said. “That’s what I loved about the moment. It’s an interpretative moment. It was specifically written that way for a question like that.”

For more about Law & Order, check out True Stories of Law & Order: The Real Crimes Behind the Best Episodes of the Hit TV Show by Kevin Dwyer and Juré Fiorillo. The book covers 25 cases from Law & Order and its spinoffs’ most popular episodes, from how a woman’s repressed memory led to solving a 30-year-old cold case to the high-profile investigation of millionaire Robert Durst. Like Law & Order fans know, the crime is just the start and the real information can come from the trial and controversial verdicts. If you love Law & Order, you’ll be obsessed with these “true crimes that are often stranger and more chilling than fiction.”