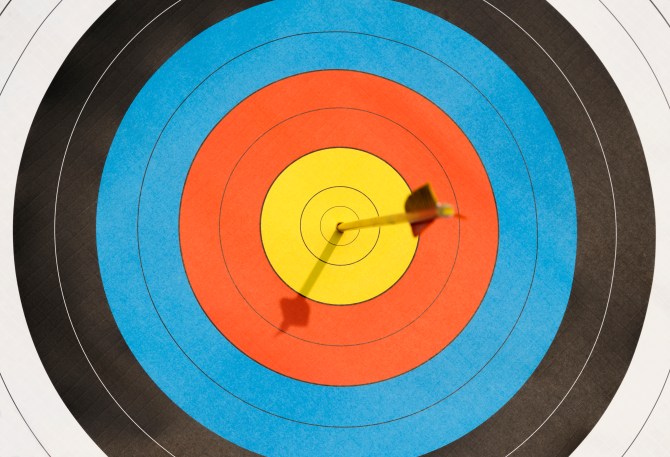 Before my big move to New York City from Georgia earlier this year, a friend approached me about joining her in an archery class. I figured it might be a cool way to spend the day outside (and bring me one step closer to becoming Katniss Everdeen, obviously), so I signed up, braided my hair, and kept my eyes open for an overdramatic love triangle.

Our first class was on a Sunday morning, so I picked up my friend, fresh coffee in hand, and we trekked out to a place called the Shire. After driving down a seemingly endless road, we arrived at the home of our instructor, and I hopped out of the car expecting to grab a bow, shoot a few arrows, and go home. Wrong.

Our instructor beckoned us into the house, asking us to remove our shoes before entering. He calmly sat criss-cross applesauce (is there a grown-up way to say that?) and gestured for us to do the same. He pulled out his archery equipment and, in a soothing voice fit for a martial arts sensei, explained the different types of bows and the parts of an arrow. His insistence on speaking slowly and the fluidity of his movements made my own voice sound harsh every time I spoke and forced me to relax and stop fidgeting.

After about 45 minutes, we were (finally!) given a bow, a quiver of arrows, finger tabs, and arm guards and told we could head outside to the range.

Upon approach, the first thing I noticed was that there was no target, just a bunch of hay bales stacked on top of one another. Our instructor explained that this class was not about aim but about basic form and release. After spending another several minutes watching a demonstration, it was my turn. I was told to clear my mind, take my time, and let the arrow be a part of my arm.

Right, OK, whatever. I just wanted to shoot, which I did. But it completely missed the hay and bounced off into the grass.

After several more clumsy instances like this, I began to find my form. The mind-clearing stuff, though, I couldn’t grasp. My head was a mosh pit of thoughts overanalyzing every slight body movement, every insect buzzing in my ear, and every throat clear from my fellow archers.

By the last class, I was able to hit a target semi-consistently, but I was still somewhat stilted in my draw and hyperaware of every move I was making. The tension in my fingers gripping the string and arrow was giving me a cramp, and each time I tried to shoot, my fingers would clench up into a claw instead of simply falling off the string as I had been told they should.

“You don’t shoot the arrow,” my teacher clarified. “You release the arrow. It should be spontaneous, almost surprising.”

That changed everything for me. Release the arrow. You just let it go. Shouldn’t be too hard, right?

Wrong, again. I’m not a let-it-go kind of girl by nature. I don’t like it when plans fall through, I obsess when I feel like I haven’t given 100 percent to something, and I’m still not over the fact that Carrie cheated on Aidan.

Over time though, the concept became clear to me—archery is a mental game, one that forces you to look inward to succeed. It’s as much about strategically firing an arrow as it is an exercise in mental discipline, razor-sharp focus, and patience. I’ve come to think of it as weaponized yoga, more about steady breathing and quieting your mind than moving around with a specific goal to hit.

Before one of the very last shots in my very last class, I stood there in silence for what felt like an eternity until my mind stopped thinking about the next step. I stopped obsessing over what was about to happen or where the target was and just hit mute. I got lost in the emptiness, and suddenly, the arrow shot out from under my fingers, and my hand dropped fluidly. And like the had instructor had suggested, it completely surprised me. I didn’t plan for it to discharge at that exact moment, but I let it happen, and without even looking at where it went, I knew it was my best shot.

It totally wasn’t. It flew way past the target, but it was such a satisfying relief of tension that it didn’t matter. I’d learned to be present and to stop my brain from taking me out of the moment.

For a while, on the range with an arrow was the only place that I could reach that calm, and even then it wasn’t a guarantee. When I moved to New York City, I immediately began researching archery ranges in my neighborhood, and I now force myself to carve out time to practice once a week. Even if just for an hour, it allows my brain to take a mini vacation and then return to my real concerns with a fresh mind-set and a quiet head.