Apparently, Instagram’s #freethenipple campaign hasn’t made its way to Snapchat yet. Minutes after sharing a topless video to her Snapchat story, Bella Thorne took the risque clip down.

After viewing the 19-year-old’s entire Snapchat story (in the name of serious journalism—of course), we’ve come to the conclusion that the actress wasn’t sending a scantily clad nude (sorry Scott Disick), but that Thorne was just sharing some behind-the-scenes footage from a photoshoot—until she realized her nipple was showing.

In the video before her deleted snap, the former Disney Channel star can be seen posing topless with red lipstick on as a black hat covers one nipple and her long, blonde hair covers the other. In the following clip (which was immediately taken down—RIP), Thorne is spotted sporting the same lipstick and hat. However, instead of her blonde hair covering her bust, the actress’s locks are thrown over her shoulder as her nip is slightly in view.

MORE: Bella Thorne Finds Comfort in Ex Gregg Sulking After “She Got Played” by Scott Disick 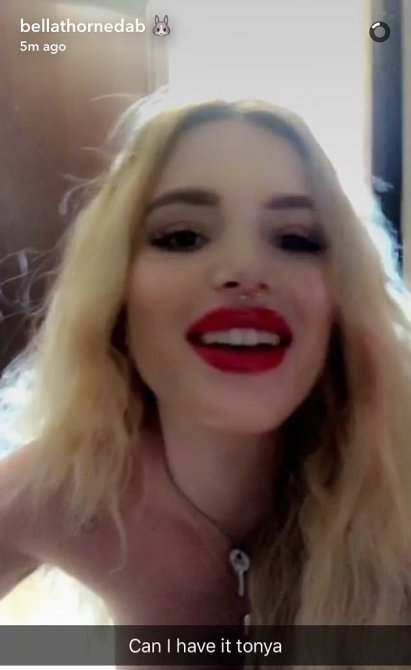 In full disclosure, her nip is only spottable for maybe 0.0005 seconds when she briefly shifts the camera down, but if we accidentally shared a nip slip on Snapchat (even if it was the smallest one), we’d probably freak out and delete it, too.

Thorne can also be heard asking, “Can I have it?” in the deleted video, referencing the hat. Her question nods to the snap’s caption which simply read, “Can I have it tonya.” We can semi-confidently identify “Tonya” as Tonya Brewer, Thorne’s makeup artist and hairstylist, who was also at the photoshoot and wore a hat eerily similar to the one in question as she did the actress’s makeup. (See—we told you we were serious journalists.)

MORE: Turns Out Bella Thorne *Always* Does Her Own Makeup