Not in front of her sister. Bella Hadid removed Zayn Malik’s hand from Gigi’s butt, and the photo is everything. Bella, Gigi and Zayn were photographed on Friday, April 23, at a grilled cheese food truck in New York City in honor of Gigi’s 26th birthday.

Photos show the trio ordering from the food truck as Zayn’s hand rests on Gigi’s butt. A second photo shows Bella taking Zayn’s hand off of her sister’s behind and putting it on her back instead (See the pictures here.) Of course, fans couldn’t get over the moment. “NOT BELLA GOING OVER THERE TO RAISE ZAYN’S HAND,” one user tweeted with a crying face emoji. Another wrote, ““why bella went to raise zayn’s hand HELP.”

For her birthday, Gigi was seen in an all-denim look with a white face mask and small braids on the sides of her face. Zayn, who shares a newborn with Gigi, wore an oversized blue and white flannel with dark pants and shoes and a black face mask. Bella, for her part, wore rust-colored pants, a patterned crop top and a matching face mask.

Gigi and Zayn started dating in October 2015. The couple dated on and off for four years before their most recent split in January 2019. By November 2019, Zayn and Gigi were rumored to be back together. In September 2020, Gigi and Zayn welcomed their first child together, a daughter named Khai. 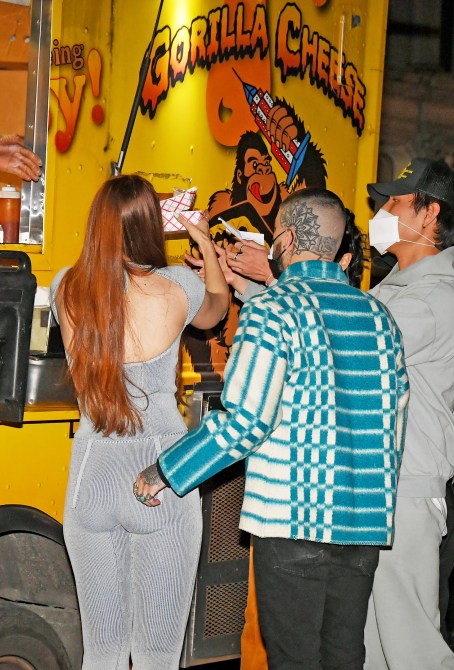 In January 2020, a source told HollywoodLife about how Bella supports Gigi and Zayn’s reunion. “Bella couldn’t be happier to see how happy Gigi is with Zayn,” the insider said. “The only thing that matters to Bella is to see her sister happy and if Zayn makes Gigi happy, then Bella completely supports them dating again.”

The source also talked about how Zayn was welcomed back into the family during Bella and Gigi’s mom Yolanda’s birthday at the time. “It seemed very natural for Zayn to join their family for Yolanda’s birthday. They all had a really good time together and Zayn gets along with their family really well,” the insider said. before noting that Bella’s focus is on “how happy Gigi was. That’s the most important thing to Bella, and nothing else matters.”