The 2018 Victoria’s Secret Fashion Show debuted on TV on Sunday night, but not everyone was so happy with seeing it on air, including one of the show’s performers, Halsey. The 24-year-old took to her Instagram last night to call out the lingerie brand for its lack of inclusivity toward transgender and plus-size women.

Halsey’s Instagram followed comments by Victoria’s Secret’s Chief Marketing Officer, Ed Razek, in an interview with Vogue. In the interview, Razek explained why he has never cast a plus-size or transgender model in the Victoria’s Secret Fashion Show. “Shouldn’t you have transsexuals in the show? No, I don’t think we should,” Razek said. “Well, why not? Because the show is a fantasy. It’s a 42-minute entertainment special. That’s what it is.”

In her Instagram, Halsey took aim at Razek suggesting that transgender and plus-size women aren’t a “fantasy.” She also redirected fans who discovered her from last night’s show, in which she performed “Without Me,” to GLSEN, an organization offering services for protecting LGBTQ youth, which she also made a “sizable” donation to. “If you are a trans person reading this, and these comments have made you feel alienated or invalidated please know that you have allies,” Halsey wrote. “We stand in solidarity. And complete and total acceptance is the only ‘fantasy’ that I support.”

But Halsey wasn’t the only Victoria’s Secret performer to call out Victoria’s Secret Fashion Show last night. Model Bella Hadid, who has walked in the show for three years, also took aim at the brand by supporting and reposting Halsey’s statement on her Instagram story. “@iamhalsey,” Hadid wrote with a heart emoji. And though both Hadid and Halsey posted behind-the-scenes shots of the show last night, neither tagged Victoria’s Secret, suggesting their now-negative opinion of the brand. 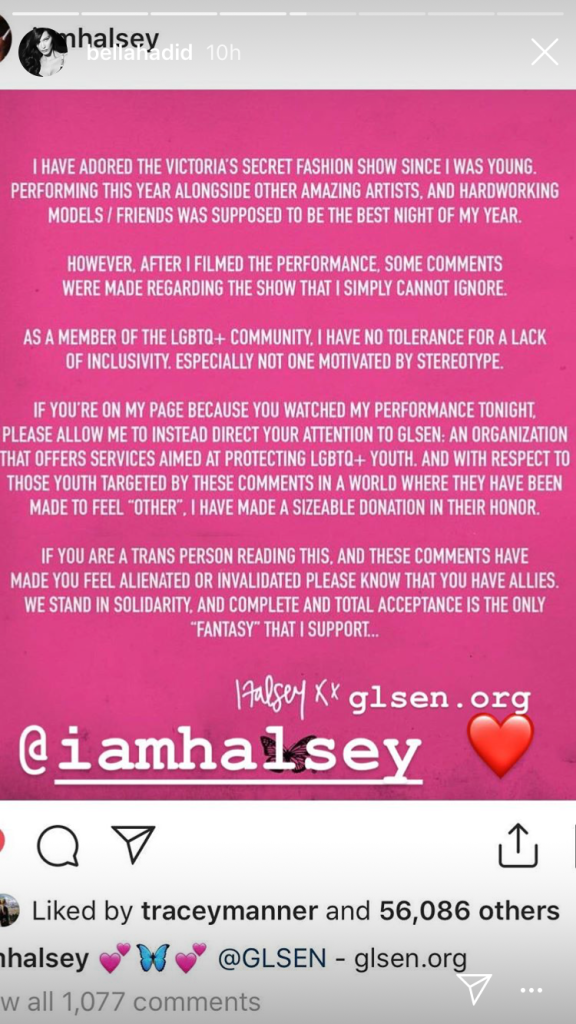 The only question left is if we’ll see Hadid return to the Victoria’s Secret Fashion Show next year. Stay tuned.