If Bella Hadid isn’t pushing the boundaries of modern fashion as we know it, nobody is.

While the KarJenner campaign was shot mostly outdoors in a breezy, dreamlike setting, Hadid’s looks like the polar opposite. Instead of sprawling out on a grassy knoll to capture a relaxed (almost heavenly) aesthetic, the supermodel is taking a decidedly bolder approach to the shoot, posing on architectural props in a stark studio setting.

Kidding—it’s actually not latex. Instead, the classic Prince of Wales checked pattern is coated in a polyurethane glaze, which lends it its incredible shininess. Oh, and one more thing: According to the product description, the skirt is “wipe clean” only. So like, you can’t wash it.

MORE: Hailey Baldwin Wore a $1,255 Flannel Shirt, Because, Honestly, Why Not?

If you’re so inclined, Fendi’s glorious creation can be purchased online for $2,290 at Saks Fifth Avenue. (What costs more than your rent but will never require an expensive dry cleaning? This little beauty right here.) 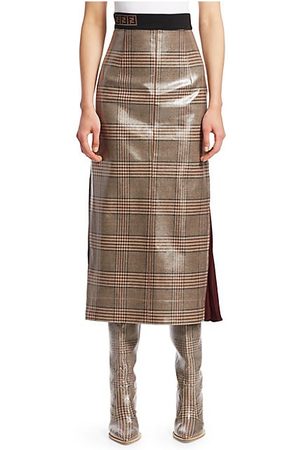