She may be at home these days, but the grind doesn’t stop for Becky G. In July, she released her current single, “My Man,” along with a music video filmed in quarantine with her boyfriend, LA Galaxy player Sebastian Lletget. “Even though some days are really cloudy, we make each other smile. That really inspired the music video,” Becky tells StyleCaster. “We were like, ‘Let’s just block a fun quarantine day for us.’ It just so happened that the background music was ‘My Man.’”

However, the “My Man” music video wasn’t the only shoot Becky has done in quarantine. On August 27, she launched her first-ever eyewear collection with DIME Optics. The collection, which is available online and is inspired by Becky’s Mexican-American California roots, features eight blue light and polarized sunglasses at $30 each. The photos for the collection were done in her own backyard in Los Angeles. “Even in the middle of a pandemic, we managed to whip together this line and make it happen,” she says. “A lot of things have been put on pause. A lot of things can’t move forward because of the circumstances, but we didn’t take no for an answer. I’m really proud and happy to give this collection to my Beasters.” 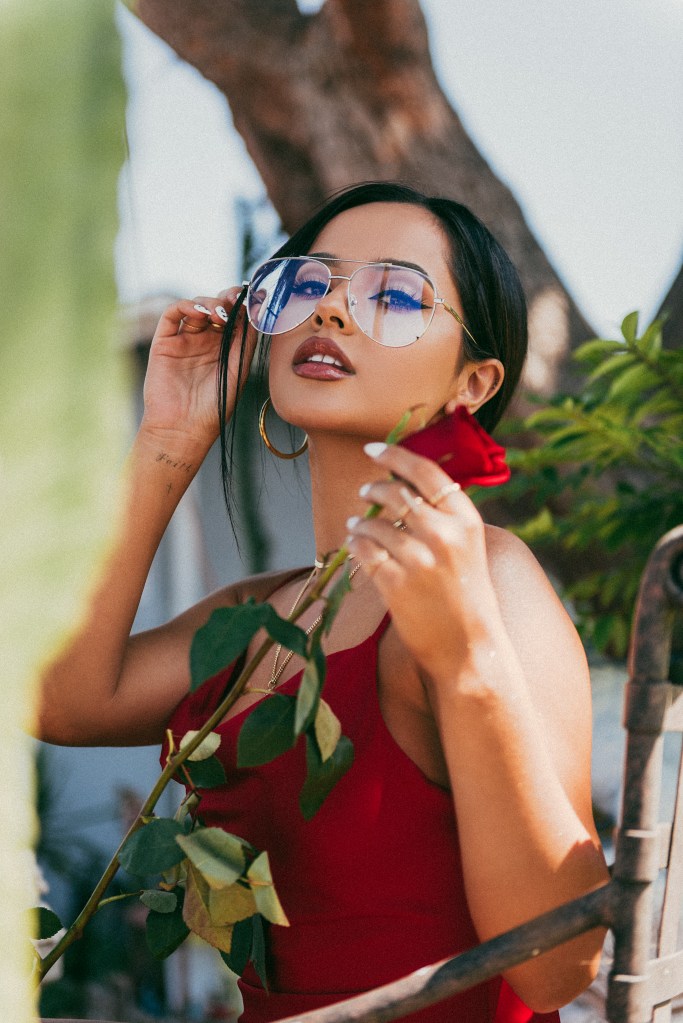 Becky—whose favorite styles include oversized shades (because of how they look on her “petite little face”) and black frames with blue lenses (a look she’s rocked in a music video before)—also wanted to keep her collection affordable because of her young fanbase. “I’m one of six people in my family. We were always on a budget, and there’s nothing wrong with that,” she says. “My fans are the hardworking, still-in-school, young individuals who want to make sure whatever they’re investing their money into is something that’s really worth it and is good quality.”

Ahead, Becky talked to StyleCaster about what it was like to film a music video with her boyfriend, what fans can expect from her new music and why BTS’ J-Hope is her “genuine inspiration” after their 2019 collaboration for “Chicken Noodle Soup.” (FYI, yes, she has listened to BTS’ “Dynamite” and she’s a fan.)

On filming the “My Man” music video with her boyfriend

“In these times, it’s hard not to be consumed by our reality. Our state of society right now. It’s a mix of emotions. It makes me very sad. It triggers a lot of anxiety. That’s been one of my biggest obstacles to overcome. The anxiety of staying in quarantine. We’re in the middle of a pandemic. In real time, we’re watching people’s deaths take place. All of this charged energy is making me think bigger and has made me realize that there are so many more important things in life, which are our health, our family and our loved ones. I’ve always been a glass half-full, not half-empty, kind of girl. The truth is, even when I don’t understand why something is happening, I know it’s happening for a reason. I wanted to share that little bit of light that I was experiencing in this quarantine, which is my relationship. We’ve been together four years, which is crazy. We live together. But last year and the year before, I was on the road 98 percent of the year, so we were always missing each other like ships in the night. This is the first time we’ve had consistent and consecutive days and weeks at a time to really be there for one another. Even though some days are really cloudy, we make each other smile. That really inspired the music video. We were like, ‘Let’s just block a fun quarantine day for us.’ It just so happened that the background music was “My Man,” which is a song that we had in the BG archives, music we hadn’t released.” 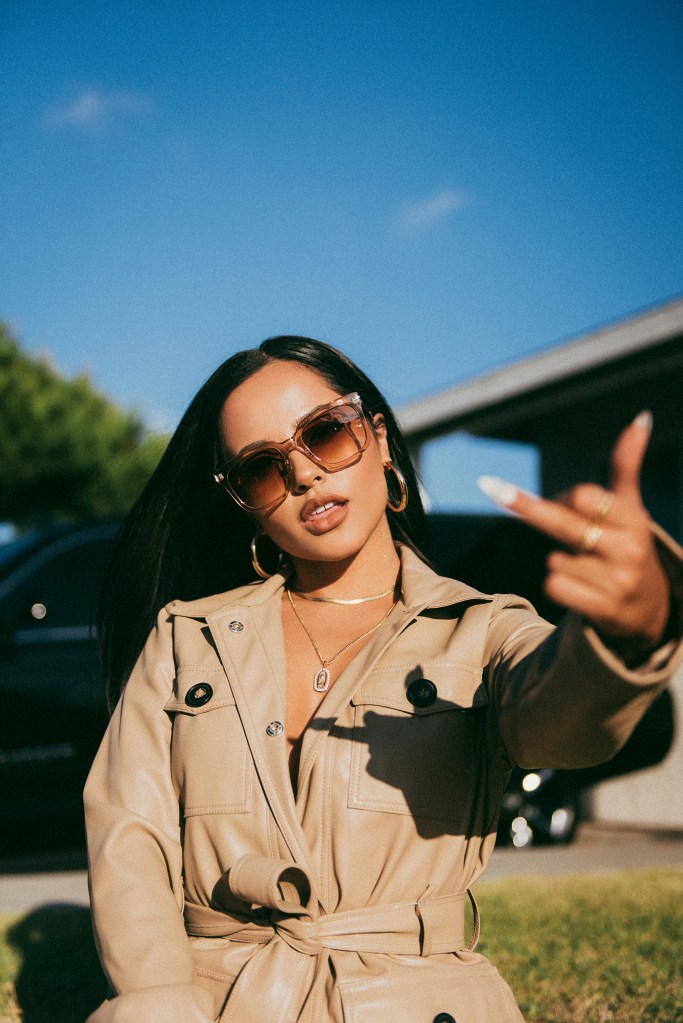 “I sing in two different languages. Three, I like to say. Spanish, English and Spanglish, which is a fusion of the two. It’s its own language. I’ve learned to just go with the flow. You bring an album to a record label and they kind of cringe. They’re like, ‘Wait! But people don’t really listen to albums these days.’ But as an artist, to create a body of work, it means a lot. I released my very first album last year in October, Mala Santa, and it performed so well. It’s exciting to see what that next body of work looks like. We’re already in the works for some things. I don’t want to put a date on it because you can’t rush those types of things. Whether they’re in English, Spanish, Spanglish, it’s important that they’re just authentic Becky.”

“For me, it became a very personal thing. It wasn’t just, ‘Oh. Because K-pop is really popping right now, I got to support it.’ When I met J-Hope, it was genuine inspiration from an artist who works his ass off. These guys do not miss a beat. They pay attention to every single detail. As an artist, to have that experience was the most inspiring to me. It wasn’t ‘Oh, this huge movement of K-pop’ that you gotta get onboard with.’ It was more about what they do and how they do it. You can’t help but love and appreciate it, as a viewer, as a fan and as someone who works in that same world. My love and appreciation for them is different than what a normal fan I guess you can say feels. I’ve experienced it first hand and it was pretty incredible. With that collaboration, I give all the credit to J-Hope because he’s the one who found me and brought the idea to me. For it to be what it is today, I give him all the credit and all the props because that was truly his vision coming to life, and I got to be a part of it.” 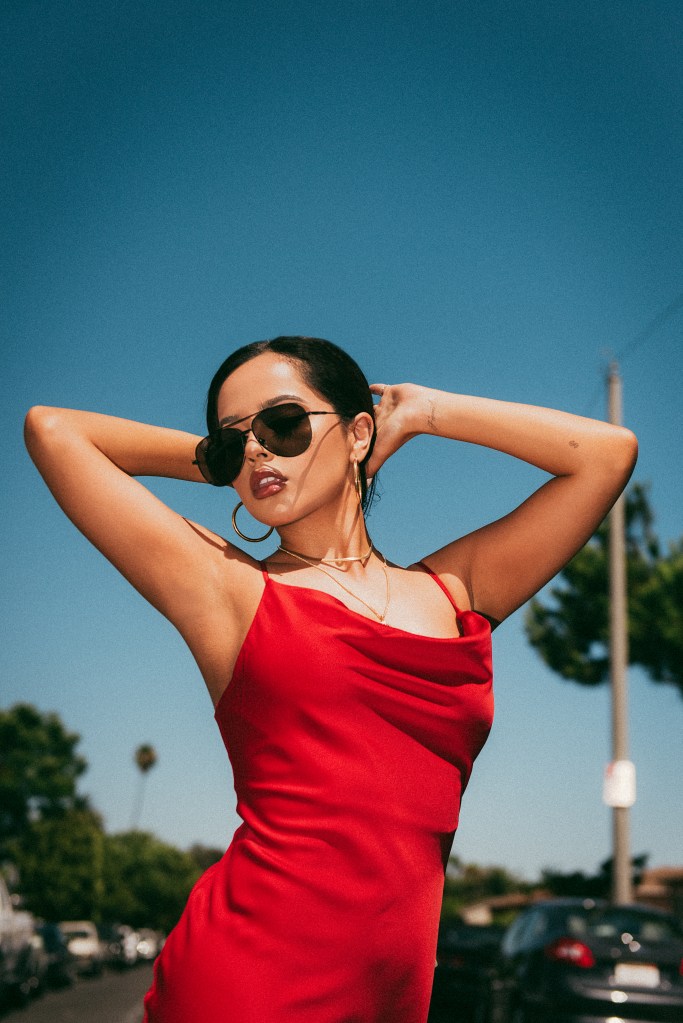 On whether she still keeps in touch with J-Hope

“We check in on each other and See how each other is doing. I find it so inspiring. He’s really involved in a lot of other aspects of being an artist. He isn’t just someone who sings a song and performs. He’s a true creative person. We obviously see his dancing skills. I know he gets behind the scenes of what the music becomes and stuff like that. I like to check in on him for sure and see how he’s holding up and doing these days.”

On what she’s binge-watching with her boyfriend

“There’s a Netflix makeup show called Glow Up. Being creative, whether it’s fashion or beauty, I obsess over it. It’s basically a makeup competition for different types of makeup artists, so I get to learn all kinds of cool neat tips and tricks. My boyfriend is going to kill me for saying this, but I’ve gotten him into it, so I make him watch it with me.”

On what she wears to feel confident

“I’m a sneaker kind of gal. I think some dope sneakers make me feel like a little baddie, I guess you could say. My fit today is just a cool little two-piece sweatsuit and some sneakers, and of course, I gotta have, whether it’s my hoops or my rings. And a beat face. That’s when I feel the most confident. But also comfortable.”