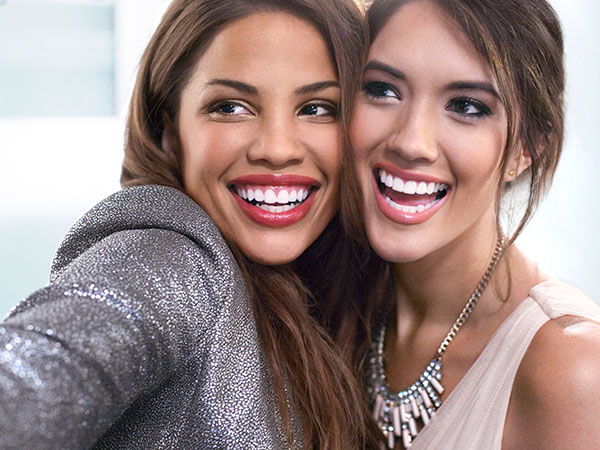 The content on beauty vloggers Andrea Brooks and Blair Fowler‘s YouTube channels is nothing short of extensive. Between Halloween DIYs, curly hair tips, occasion-specific makeup tutorials, and even themed challenges with guests, these gurus have covered, created, and produced enough segments that could take hours and hours on end to go through—it would be a commitment to go through all these gems in one day, if it’s even possible without a break. Their stats are just as impressive. Blair ranks in with over 1.7 million subscribers and over 260 million views on her content. Andrea’s channel has over 3 million subscribers with over 164 million views.

These two girls, who actually became great friends through mutually belonging to the beauty YouTubers network, have joined yet another channel—this time in partnership with Colgate Optic White Express White—to provide their viewers with tips that will help them wear a whiter and brighter smile, the scoop on the toothpaste and whitening products, as well as other beauty tricks and info. We caught up with the vloggers to find out their best tips for a whiter smile, what you need in your arsenal before trying to launch your own channel, and more.

Tell us a little bit about your partnership with Colgate.
Blair Fowler: So Andrea and I have been friends for a while now. We were both contacted individually to be a part of the Colgate Optic White Channel. They wanted to create a smile show that was really focused on tips and tricks, beauty and fashion, to really make your best accessory, which is your smile, pop.

What are some tips you have to really make your smile pop?
Andrea Brooks: I really love bronzer. I feel like bronzer just adds a warmth to your face, and it also makes the whites of your eyes stand out and the whites of your teeth.
Blair: Also, wearing some off-white, off-pearl color earrings will kind of pull your eye and have your teeth look much whiter and brighter, because they’re a little bit more yellow than your teeth.

How do you find inspiration for constantly making videos? You make them all the time!
Blair: Video requests.
Andrea: Yeah. It’s very much a relationship with our audience. They’re constantly asking us for certain types of videos. You get a feel for your audience, and you get a feel for what they’re going to like. You just give them what they want.
Blair: There are days where I wake up and I know I want to film, but I have no idea what I want to do that day, so I’ll tweet and be like, ‘Guys, I’m ready to film, but I don’t know what to film. Send me ideas!’ And they do!

What’s the hardest thing about beauty vlogging that maybe someone who vlogs wouldn’t know?
Andrea: Videos—it’s very much a process.
Blair: People think she just sets up a camera on a tripod, films it, and puts it up for us.
Andrea: Some videos are that simple but, the videos that a lot of them want to see, it’s very much a process. It takes me sometimes weeks to work on just one video. I want to be really happy with it. So that’s probably one thing I don’t talk a lot about with my viewers is actually how hard it can be to finish this one single video.

What’s the longest it’s taken you to complete a video?
Blair: I’ve worked a couple weeks on one.
Andrea: Yeah, there’s been a couple times actually where I was not happy for a specific video for like a month. The video right now that I’m working on, it took me a week and a half. I had to actually take breaks from it to film other stuff in-between and then continue on that video.

That’s everything from filming to editing down?
Andrea: Yeah. Some of my videos, I make them almost like little short films, so I have to film in like seven different places and then I have to film in the day and the night and the editing and the voice-over.
Blair: When we film on our own, we edit everything ourselves, so even for me—trying to set up the tripod and make sure it’s focused on myself—even that can take forever. Focus it, stand back, make sure the lighting is perfect.

You’ve done so many different kinds of looks. What’s one that you’re still working on perfecting?
Andrea: Eyeliner.
Blair: Yeah, I was going to say that I would love to be able to do like what Ariana Grande has been rocking lately—that really dramatic winged-out eyeliner. I can do it, but it takes a really long time and no one has that much time to spend in the morning getting ready. I wish I could do it as quickly as I do my normal eyeliner.

What’s the best thing about collaborating with one another?
Andrea: Her and I get along so well, that we have always had this natural chemistry.
Blair: She was like my “adopted big sister.” I was like 16 when I started and we would get on AIM chatroom and like talk to each other because we were both YouTubers, but we had never met. We have been good friends for a while. I think we have a very similar personality and sense of humor, so when we get in a room together and we get to film or do interviews, we just roll off of each other.

What are some makeup brands you’re like really excited about this year?
Andrea: I love NYX. It’s affordable. It’s cruelty-free. I feel like the quality is really good. Anyone can get it.
Blair: I just got the Cinderella collection from MAC, which is like a really big deal to me. I’ve been playing with those products.

What’s been one of the most requested beauty looks from your readers?
Andrea: DIY is like my most requested. I love making things. I’ve always liked to make things and show people how to make things. You know, so that’s what they love to see from me.

If someone wanted to make their own channel, what things do you think they need to have before they launch?
Blair: You need to have the camera and tripod or set it on a stack of books, which I still do sometimes if I lose that thing that screws into your camera. I would say definitely have a little bit of a plan in your mind. I think sticking with it. I’ve seen so many girls, and guys too, they’ll upload some videos on YouTube and after a month they’ll see they don’t have as many subscribers as the top YouTubers and so they get discouraged and just quit. I’ve been doing this for almost seven years, so it takes a while to grow it up. Don’t stop and get discouraged.

Should you upload a lot of videos at one time?
Andrea: Honestly, I think that it really depends on the person and why you’re doing it. If you know what you’re talking about and passionate about what you’re talking about, you’re going to have a good channel. Follow your heart! I wouldn’t necessarily say to do what I do or someone else does because that might not work for you. If you really want to do it and feel passionate about it, do it in your own way and what makes you feel passionate.