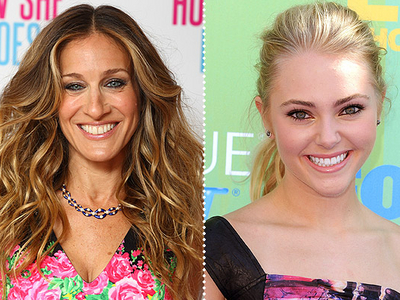 The CW has finally cast its young Carrie Bradshaw for their pilot, The Carrie Diaries.

AnnaSophia Robb will play teenage Carrie Bradshaw, Sarah Jessica Parker’s character in the HBO comedy Sex and the City. A newcomer, the actress is best know for her roles in the 2005 version of Charlie and the Chocolate Factory and Bridge to Terabithia.

The prequel, which is based on the novel The Carrie Diaries by Candace Bushnell, will take place in the 80s as Carrie explores high school in Manhattan.

Stefania Owen has also been cast as Carrie’s 14-year-old younger sister. Others signed up for the pilot are Gossip Girl producers Josh Schwartz and Stephanie Savage as well as Amy Harris, a writer from Sex and the City, who wrote The Carrie Diaries pilot!

But most importantly who is in charge of the wardrobe? Carrie would have been nothing without her Manolos and being decked out in Dior from head to toe. Who better than Gossip Girl costume designer Eric Daman to bring Carrie from teenage Manhattan school girl to full-fledged fashionista? Blair Waldorf, watch out. Your competition has arrived.

Are you as excited as we are for this new addition to the fall TV lineup?