Ah, America. The land of the free, the home of the brave–and the country where women are supposed to start popping out babies before the age of 25, apparently. According to a just-released Gallup poll, most Americans—to the tune of 58%—think the “ideal age” for women to begin having children is “25 or younger.” Scarily, there is no bottom cap for that range, which in theory means 58% of our great country may or may not support teen pregnancy. 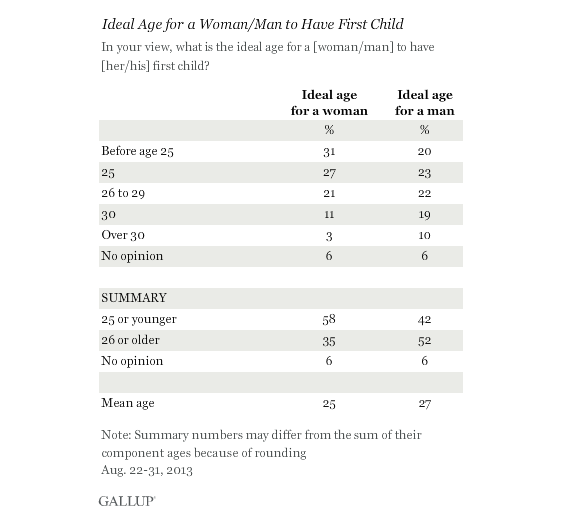 Of course, those same expectations don’t apply to men. Only 42% of Americans responded that they believe the ideal age for males to start procreating is 25 or younger. Most  people, 52% in fact, think the ideal age for men to start having babies is 26 or older.

Meanwhile, there’s this little thing called science, which recently debunked the theory that the risk of pregnancy complications increases with each year on the mother’s age. A 2012 study found that pregnancy in women above the age of 50 carried an equal amount of risk as in women in their 20s who got pregnant using donated eggs.

MORE: Some Women Are Renting Fake Boyfriends To Keep Their Parents Quiet

So, what gives? These age-old beliefs of women ideally becoming pregnant and giving birth before the age of 25 have nothing to do with science or facts, but rather with cultural indoctrination; our country is still getting over a large chunk of history during which it wasn’t even considered appropriate for women to have jobs outside the home. Let’s not forget that women haven’t even had the right to vote for 100 years (that law passed in 1920, folks—so it’s not all too surprising that a great many people still hold beliefs about “a woman’s place” that may or may not be archaic.

How do you feel about the latest Gallup poll results? Sound off below!