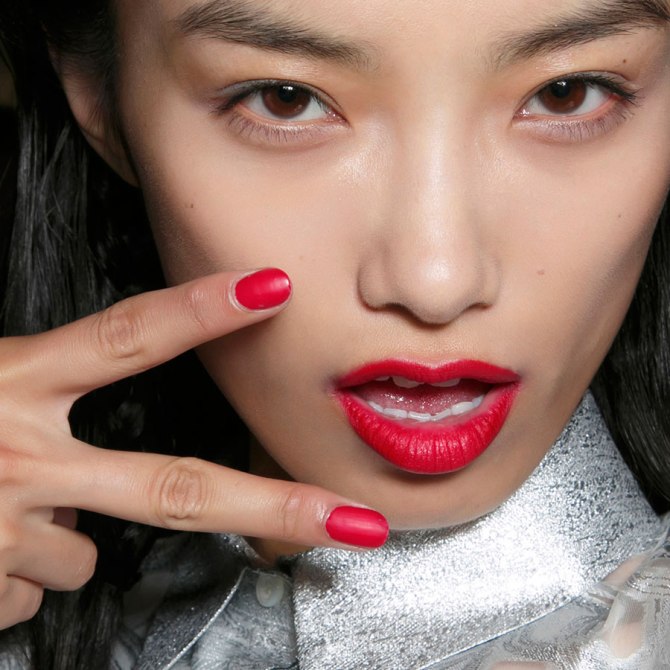 With the particular color and whether or not it’ll last throughout the day without living on your coffee mug typically being your two main concerns, you might not think twice about what a swipe of lipstick is actually made of. Still, it peaks your curiosity, doesn’t it? It’s solid but turns to cream or at least something that smears with ease, and it will most definitely stain a light-colored shirt with its pigmented power. Some are made of all-natural lipstick ingredients, some are most definitely not. In any event, we rounded up some common ingredients, plus others that receive mixed reviews, that you might find living in the ingredients list of your favorite lipsticks.

Waxes
Ever wonder how lipstick maintains its solid shape and its ability to spread evenly on your lips? It has a lot to do with the wax its made with. Candelilla wax, which is derived from a plant called the candelilla shrub, is a common find. It’s been said to prevent moisture loss, and is one of the greener alternatives in this product. You’ll see it in ingredients lists from Nars Audacious Lipstick to all natural finds.

Carnauba wax is also used often to help maintain shape, and it’s made from the Brazilian Carnauba palm. This particular wax is said to have the highest melting point of all the waxes, only getting melty when it reaches about 87 °C. Beeswax tops the common ingredient list as well, being formulated in various lipsticks to maintain shape. However, because it’s derived from an animal, it’s not used in lipstick products that carry a vegan label, and some experience allergies to it. As you may have guessed, Burt’s Bees largely carry this particular ingredient in their products.

Oils
There’s a lot to making lipstick stay in that slender-shaped tube without melting and mushing all over the place, and oils are up for the job, too. Lanloin oil is an emollient that’s commonly used in lipstick, and it’s a wax that’s derived from the sebaceous gland of animals who grow wool—i.e. sheep. It can be transformed into a wax, as well as an oil when heated. It’s used in cosmetics products for its hydrating properties and solid Lanloin reportedly only melts at about 100 degress F.

Castor oil is a big player, too. This ingredient is often used as a moisturizer, and is filled with fatty acids and has anti-bacterial and anti-inflammatory qualities. You’ll also see various other vegetable oils, olive oils, and moisturizing oils like jojoba and aloe formulated into lipstick to maintain healthy, hydrated, and soft lips. Depending on the product, mineral oils can be found as well.

Sunflower seed oil, shea butter, cocoa butter, commonly found in lotions as well, can be added in so that your lips maintain moisture while showing off the bold hue of your choosing.

Dyes and Fragrances
What gives lipstick color? Most of the time, if you’re not using an all natural or organic lipstick, it’s a mixture of synthetic dyes. You can also find products with pure pigments that give them that pop of color. Some lipsticks contain artificial fragrances, while others take the light fragrance of the moisturizing oils or natural additives that are used.

The Stuff That Gets Mixed Reviews
While it depends on how much you come in contact with certain ingredients and much more research often has to be done, there can be some not-so-thrilling (sounding, anyway) ingredients found in lipstick. Some preservatives, forms of vitamin E and A, and colorants found in lipsticks have been linked to health problems such as irritation, allergic reactions, cancer, reproductive issues, and more. However, this is largely in part to how often you’re using them, ingestion, and the research isn’t conclusive.

Back in 2012, traces of lead were also been found in some lipstick (scary, we know, and with some colors being higher in lead than others), but the FDA claims that these amounts are not harmful or pose any safety concerns. Still if this makes you nervous and you’re one to avoid harsh chemicals in the first place, you may want to move over into an organic line. In recent years, other metal substances that could be harmful to your health over long periods of time and extreme exposure, such as aluminum, have been found. According to an article by the New York Times published in 2013, one expert said it’s best to take a “common sense approach” to cosmetics, urging those to remember not to let kids play with makeup and that damage isn’t going to be seen in short term.

MORE: How to Make That Lipstick Last