Over the past few years, three little letters have captivated our collective imagination: CBD. Though Cannabidiol (CBD) has been around since the 1940s, it’s only recently entered the mainstream. And now that it has, it’s not at all uncommon to see parties serving CBD cocktails, stores selling CBD-infused skincare products, and people taking CBD to quell their anxiety. Still, confusion surrounding CBD abounds—leading many of us to pose one simple question: WTF is CBD anyway, and should I be taking it?

What is CBD? And how is it different from THC?

Each cannabis plant is comprised of a bunch of chemical compounds—113, to be exact. Each of these compounds is known as a cannabinoid. CBD is one of them. THC is, too.

When you smoke weed, you’re usually getting exposure to a bunch of different cannabinoids at once. Your joint isn’t all THC, and it’s not all CBD, either. (There are ways to consume straight THC. But if you haven’t sought those out, odds are, you’ve enjoyed your THC with a side of CBD—and a bunch of other cannabinoids, too.)

Unlike THC, CBD isn’t intoxicating—and that’s one of the reasons people love it. CBD is said to alleviate pain and anxiety, and many people prefer to seek that relief outside a “getting high” setting.

Why are so many people taking CBD?

One of the reasons CBD is just now getting so popular? Recent research has suggested that CBD can alleviate all kinds of things: pain, anxiety, depression, epilepsy, high blood pressure, substance abuse—even acne. But before we go any further, it’s important to remember this research is still new. Just because one study found something doesn’t mean it’s definitively true. It takes years—decades, even—to build scientific consensus. And even then, something we thought was true for years might end up being proven wrong.

The point? Take these purported benefits with a grain of salt. Don’t distrust them entirely—just don’t assume they’re guaranteed. Keep your eyes peeled for new information, and keep your mind open, too.

Perhaps one of the most common applications of CBD is to reduce pain. Several studies have linked CBD with decreased inflammation and pain in rats, and research has suggested that these benefits may apply to humans, as well.

Another common application of CBD? To reduce anxiety and depression. One review noted that research strongly supports the use of CBD to treat a number of anxiety disorders, including: generalized anxiety disorder, panic disorder, social anxiety disorder, obsessive-compulsive disorder, and post-traumatic stress disorder. However, the same review notes that most existing research only explores CBD being administered acutely to treat anxiety. So while studies have shown that CBD being administered for a few days or weeks at a time can be effective, little research has explored the effects of CBD taken over longer periods of time.

Research regarding CBD and depression is a little more scarce. Some animal studies have linked CBD to decreased depressive symptoms in small numbers of rats, but further exploration is needed.

Nearly one-third of people with epilepsy have a treatment-resistant form, meaning common forms of medication don’t significantly reduce their symptoms. Some research has explored whether CBD can fill this gap, and a few studies have suggested it can. One trial found that CBD may reduce seizure frequency for patients living with a treatment-resistant form of epilepsy. In fact, in June 2018, the FDA approved Epidiolex, a CBD-based medication slated to treat patients with rare and severe forms of epilepsy.

Some research has suggested that CBD can reduce resting blood pressure. One study in particular showed that a single dose of CBD lowered the blood pressure of nine healthy volunteers. When subjected to stress tests designed to raise blood pressure, these volunteers saw a lower blood pressure increase than those who hadn’t taken CBD. (That said, nine is an extremely small sample size—so further research is definitely needed.)

One of the most interesting applications of CBD is in combatting substance abuse. Some small studies have suggested that CBD may be able to temper some of the effects of addictive drugs, and that cannabinoids in general may lessen withdrawal symptoms. One trial also found that CBD could significantly reduce opioid use in patients living with chronic pain. (The same trial also found that CBD may alleviate pain and improve quality of life for those same patients.)

Since CBD has anti-inflammatory properties, some have suggested that it could be used to treat acne. And a small body of research has backed up that theory. So far, studies have merely suggested that CBD has the potential to treat acne. None (at least none published on the National Center for Biotechnology Information’s PubMed) have gone as far as exploring whether it actually does.

CBD and, well, everything else:

These are just some of the many purported benefits of CBD. In some animal studies, CBD has also been shown to restrict tumor growth. A few small studies have shown that CBD may contain antipsychotic compounds that can be used to treat schizophrenia. One study found that CBD reduced heart damage in mice with diabetes. And a small body of research has suggested that CBD can potentially combat some of the nausea and vomiting that tends to accompany chemotherapy.

“Where I think we are likely to see a great deal of value with CBD, therapeutically, is with metabolic conditions, like diabetes and obesity,” Martin A. Lee, co-founder and director of Project CBD and author of Smoke Signals: A Social History of Marijuana–Medical, Recreational and Scientific, tells StyleCaster. Lee says some animal studies have found promising results in these areas. But because there hasn’t been any official, human-based research conducted in the area yet, these potential benefits often go un-discussed (especially compared to some of the others listed above).

Are there any side effects?

As is the case with virtually any kind of treatment, CBD is associated with a handful of potential negative side effects, as well. The most common side effects include weight gain and loss, reduced or increased appetite, fatigue, exhaustion, and diarrhea. In most cases, these symptoms were described as mild-to-moderate and infrequent—in fact, in many studies, no side effects were reported at all. (One patient in one study did experience liver damage, however.) 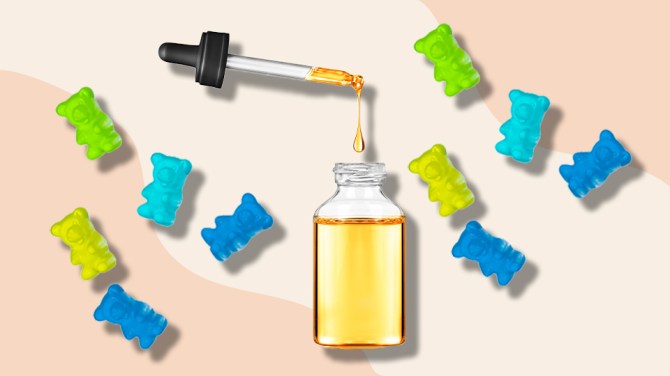 Until last year, CBD was considered a Schedule 1 controlled substance. (For context, that’s about as serious as a controlled substance can get.) That’s because hemp and its many derivatives were classified as Schedule 1 drugs. But in December 2018, Congress passed the 2018 U.S. Farm Bill (more officially known as the Agriculture Improvement Act of 2018), which altered the legal status of hemp and hemp-based projects—including CBD.

Under the new law, hemp-based products were no longer considered controlled substances by the federal government—so long as they contained less than 0.3% THC. With that, hemp-based CBD effectively became legal. But marijuana remained a Schedule 1 controlled substance, meaning marijuana-based CBD was (and is) still very much illegal. (Also worth noting: Despite the shift to legalize hemp-based CBD, it’s still illegal for any CBD product to be marketed as a therapeutic product or dietary supplement unless the FDA has specifically reviewed and approved it.)

Even in states where CBD is medicinally available, it may be illegal to grow or sell. And it may only be medicinally legal if you have a specific health condition. To learn exactly what CBD laws look like near you, visit a nationwide resource, like CBD Central.

Where can I find CBD?

Depending on your state’s laws, you might not be able to find a CBD dispensary anywhere near you. Or, if you’re in a more pro-cannabis state, you might find yourself absolutely surrounded by dispensaries. Either way, Lee suggests seeking out licensed cannabis dispensaries whenever you can, because you’re “likely to get a better product” there. This is because states that have legalized cannabis products tend to regulate those products on behalf of the consumer. Regulations vary from state to state, and these rules can affect everything from what pesticides are used on the cannabis to what information appears on the product label.

If you live in a state that hasn’t legalized the sale of cannabis products, you’re not entirely out of luck. Many states that disallow the sale of CBD permit their residents to travel out-of-state to buy CBD—so long as that CBD adheres to in-state laws. (If you’re in Tennessee, for example, you can travel to Kentucky to buy CBD and bring that CBD back to Tennessee—but only if you have a proper medical license for obtaining that CBD in the first place.) You can also try buying CBD online, but you’ll need to make sure you’re buying from a genuine dispensary and that it’s legal for you to do so, based on your state’s laws.

“If you’re in a state with a medical marijuana or adult-use program, use that program. It’s better to go to stores that are regulated in the context of those programs,” Lee says. “Of course, not everyone’s in that situation.” Unfortunately, since we’re still in the early stages of CBD sale and regulation, you may have to do a little research to determine where you can buy CBD safely and legally.”Eventually, this will all straighten out,” Lee says. “But right now, a lot of the onus is on the individual consumer.”