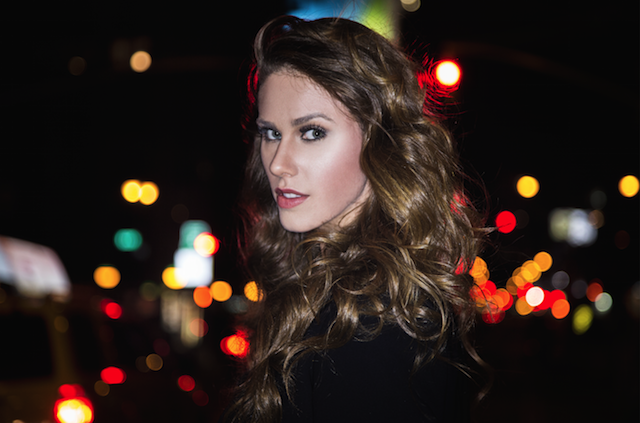 Cassandra Bankson, model and YouTube vlogger rose to fame back in 2012 when her story of being ostracized back as a teen due to acne drove her to finding a way to cover it up through makeup, thus launching a career as a beauty expert due to her skills. Bankson shares what she’s learned on her YouTube channel and blog, DiamondsAndHeels14, to bring together her “online family” in a way that she didn’t have growing up, bullied, during her childhood.

Her skill with makeup (and talents as a model) recently got her cast in Dermablend’s latest campaign, once again bringing her into the limelight. To kick off our month dedicated to YouTube experts, we spoke with Bankson about her struggle with acne, how YouTube has helped her, and what she wants to tell other girls facing the same struggles today.

Beauty High: Okay, first can you talk to me a bit about your story, and what got you into makeup to begin with?
Cassandra Bankson: Honestly I’ve always been very interested in cosmetics, whether it’s cosmetics or clothing I kind of see it as putting on a different person every day – you’re always going to be yourself, but it helps you express a different part of yourself. Throughout growing up I was bullied, but while I was growing up I found modeling, and then I found YouTube.

Because of acne I had to leave school – due to bullying and stuff like that, but once I got into makeup I realized that people couldn’t tell that I had this issue [acne] and I could finally just be myself.

And looking back now, it’s like wow, were you crazy? It’s just your looks, but in a society that really views that as so much, I started learning that I could cover it up. YouTube helped me to learn how to do my makeup, so then I started vlogging to give back to YouTube, and finally I decided that you know what, I don’t have a following or anything, but my foundation is what helps me be myself – and I hope if just one person sees it it will change their life.

So that’s when you did your foundation application video that kind of started everything?
Next thing you know, TV stations see it, and I’m having a panic attack about people seeing me without my makeup, and then I go look at the comments, and it was the first time people said things to me like they genuinely cared and I saw the beauty on the inside – and for me it was like ‘oh my god’ and people can actually be nice and beautiful and I don’t have to be scared, and from there it was this small online family and it just started growing.

When did you actually start modeling? What pushed you to do that when you were younger?
I started modeling on accident, a family friend said they needed me to do a portrait for class, so I did it as a favor and some of them even won awards for his school. I remember seeing myself in the photos and saw myself as a different person – I saw myself as pretty. That’s when he said I should pursue local photography, and I did. I just always did my own makeup for shoots, and told them to put whatever they had to on top of it – I always told them to not take mine off, and I got sent home from set a couple of times for it.

And then, the Dermablend campaign came along. Were you nervous to shoot that campaign?
Well originally I was going to be a model for Dermablend for a lip product and I accepted it from the agency, and then once they found out about my skin, I even told them I’ve been using Dermablend for years, they said hold on – we have Zombie boy – and we have this model who has been using this for years and we can build a positive campaign around this. I can go out now because of makeup, makeup can help me identify who I really am. So I said you know what, just roll with it.

What was it like shooting that campaign, and talking about everything you’ve gone through?
It was very emotional – I had to bring up a lot of things personally in my mind and talk about it – it’s one thing to be alone in your bedroom, it’s another to be in a room full of people. But, I think it’s my favorite modeling campaign to date.

Is there an overall message that you hope to portray with your YouTube channel?
Definitely. I think it’s about living beautifully and happily both inside and out. YouTube and makeup taught me to do that both with and without makeup. There was a time that I woke up every morning and I didn’t have a reason to live. I can’t believe that I was at a point in my life like that, but I was. And I think we as individuals have a chance to change that in people – and hoping to change someone else for the better, and just inspire other people – and spreading positivity and love.

What advice do you have for teens who are struggling with acne?
Never give up. Dermatologists and doctors and even some blogs can be so intimidating and you kind of feel pushed under the bus – you have to find what works for you. So that way outside of medication, outside of products, you can find your own natural balance and what makes you look and feel amazing.

What about advice for young YouTube vloggers?
I think it depends on what your channel is, but I think one of the most important things over all is being true to yourself. A lot of people come to me and say they started a blog to get free products or to make money, but I think that’s what separates some blogs from the most successful ones, I think if you have a true passion for what you do, you’ll do it a million hours a week and you’ll be successful if you’re focused on what inspires you – do what you would do if you weren’t paid and you’ll love doing it.