She’s won an Academy Award, an Emmy Award and two Tony Awards, and now 54-year-old actor and activist Viola Davis is jumping into the beauty world. Davis is officially a L’Oréal Paris spokeswoman, the company announced at an event in New York City. It’s hard to say what TV and movies she’s best known for during her 30+ year career—The Help, Fences, and How to Get Away With Murder, to name a few—but it’s not just her acting skills that secured her new gig. I mean, have you seen her? She has the most beautiful skin so a skincare campaign is a perfect fit. And not to sound like a Hallmark card, but it’s her inner beauty that just seals the deal.

And Davis isn’t taking her new role lightly. Though she joins fellow L’Oréal Paris spokeswomen such as Celine Dion, Helen Mirren, Eva Longoria, Elle Fanning and Aja Naomi King (her HTGAWM co-star), she knows even in this diverse group, representation matters. “It’s sort of like raising your daughter and telling her every day, ‘You’re beautiful.’ You’re sort of saying it to your younger self,” Davis said during the event. “I feel a huge responsibility to give women that message, especially women of color and especially women of a certain hue. It’s the foundation of everything in your life, your value. It’s the first thing that people attack when they want to make you invisible and erase you and it’s the first tool you can be armed with to fight them with it.” 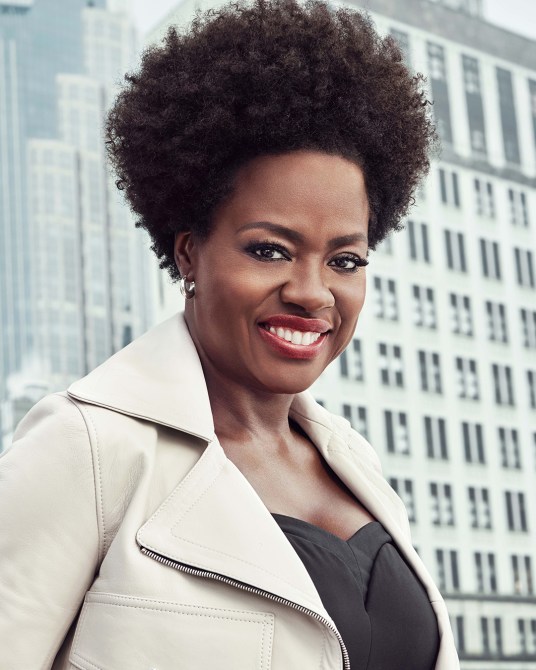 Davis will appear in TV, print and digital campaigns for L’Oréal Paris’ Age Perfect beginning later this month, in which she’ll be able to show off that glowing skin. But the actor wasn’t always so confident. “To come from a path of always sort of fighting self-esteem issues to feel like now you’re a leader. Now you have the baton. So it’s been difficult,” she says. “What I find is, and I memorized this quote, it’s a Frederick Douglas quote, that ‘power concedes nothing without a demand.’ What we have found in history culturally is that women, but especially women of color and women of a certain hue, have been regulated to the caboose. They have been considered less than. They have been considered not as beautiful, not as feminine.”

She explains that pushing women of color to the back has permeated all aspects of our culture, especially the entertainment industry. “So typically, when you see a movie especially in the past, there’s a limit in how we are seen,” Davis explains. “We’re seen as nurturers. We’re cussing people out in a lot of movies. We’re seen as ultra-masculine. We’re seen as a supporting character, a best friend. Even in movies that are considered ‘black movies.'”

She continues, “Remeber I said ‘power concedes nothing without a demand.’ When I found myself in that realm, and I hit it, I hit the top of success. I got my two Oscar nominations. Now I am sort of someone that is known. I was disillusioned. I was isolated. I saw the limitations of success. So then, I had to go into the other realm, which is a realm that no one talks to you about, that’s the realm of significance. The realm of significance was that I had to flip the switch. I could no longer rely on the power structure to concede to my dreams and my desires and how I saw myself.”

Flipping the switch means Davis now has control over how she sees herself and she’s hoping to pass that down to her nine-year-old daughter Genesis, who is following in her mom’s acting footsteps. “I tell my daughter her worth is in her heart and in her head,” Davis says. “I think it’s important because we’re constantly barraged in the media with images of perfection. And when we can’t achieve that perfection, we kind of crawl into the space of shame if we’re not thin, if we’re not so-called classically beautiful. If we’re not young, if we’re not successful. If we don’t lean-in. We can keep going on and on.”

Davis says author Brene Brown has the best message and something Davis feels especially connected to. “You were born worthy. You don’t have to earn to be worthy,” she says. “You just came out of your mom’s womb. That’s important because I have spent probably the greater portion of my life looking at images of women who did not see their worth. So I mirrored their behavior until I hit a wall and I realized I lived half of my life not feeling like I had value.”

In fact, Davis never even saw herself as beautiful. “There was a part of me that didn’t feel like I really enhanced any sort of parts of me that were beautiful because I just assumed that they weren’t,” she says. Davis even skipped wearing red lipstick growing up because she thought her lips were too big. “There’s a part of me that believed everything that people said about me that was negative and anything that was positive about me made me shy,” she continues. “It made me sort of introverted. And now I look at pictures of myself back then and I’m like, ‘are you kidding?'”

“I have a picture of myself when I was 15 I just posted on my Instagram and I have two fingers up and I’m like, who is that cute girl? And it’s me. I always felt like that was conceited. So I wish I could talk to her and say you know, you’re worth it. Everything. You’re pretty fabulous.”