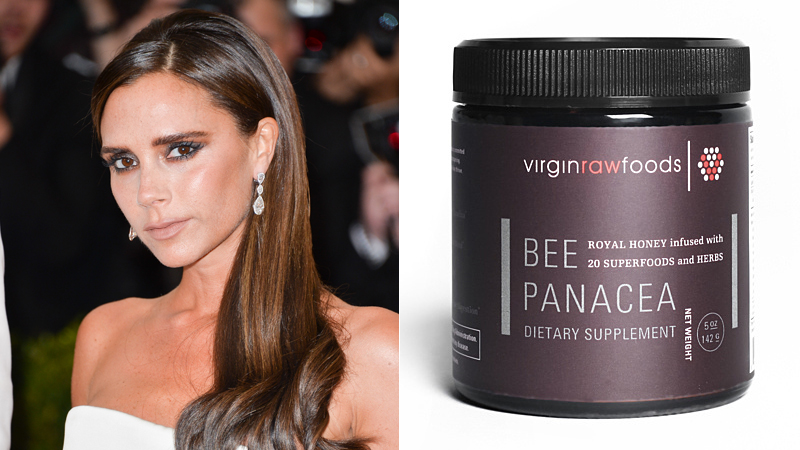 Victoria Beckham recently tweeted: “My new thing!! Eat one tsp a day!” along with a picture of Virgin Raw Foods Bee Panacea dietary supplement. And when V-Becks advocates something—her past health and fitness obsessinos have ranged from Tracy Anderson classes to Acai berries—the world pays attention.

MORE: Can Fasting Change Your Body?

So, what exactly is Bee Panacea? We did a little digging.

The dietary supplement is a blend of bee honey, pollen, super-foods such as spirulina and chlorella and macs root, and Chinese and Ayurvedic herbs such as shilajit as well as rishi (a form of mushrooms). The concoction reportedly does everything from creating glowing skin, to strengthening the immune system, to detoxifying the body. The real reason, though, that it’s become a celebrity favorite is that it reportedly helps with food cravings and weight loss.

MORE: 15 Terrifying Things You Never Knew Were in Your Food

The makers of the product recommend adding it to hot tea, blending it into smoothies, protein shakes, yogurt, or even just scooping it from the jar and downing a tablespoon or two daily.

While we haven’t tried it ourselves, reviews we’ve read say it tastes a little bit like chocolate. Considering the various diet fads going around these days, including everything from teatoxes to the ice diet, a chocolate-tasting supplement sounds pretty good.

The big downside as far as we can tell to Bee Panacea is the cost. A 10 oz jar of the stuff sells for $69.95, and even the supplement’s biggest fans admit that it doesn’t last very long. That being said, it’s beginning to become crystal clear why the Birkin-toting Beckham is such a big fan.

Have you ever tried Bee Panacea? Let us know below!