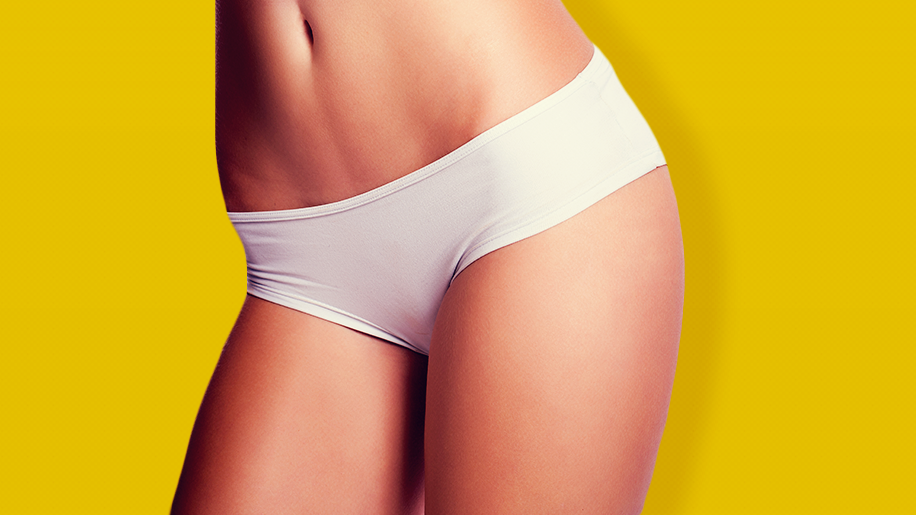 “Six more minutes and then you’re done,” the aesthetician says sympathetically as I grit my teeth and cover my face in pain.

I was nearly finished with my first of three Venus Freeze treatments, a “revolutionary” option for anyone wanting to banish cellulite, tighten their skin, lose inches from their thighs/hips/waistline, and reduce the appearance of wrinkles (when used on your face). It’s also supposed to feel like a relaxing hot stone massage—but trust me when I tell you, it does not.

My particular goal was to banish that pesky layer of fat that settled on my hips and thighs some time after adolescence and refused to budge for the following decade, dimpling my skin and ruining a lifetime of bikini photos.

Despite cellulite being totally normal, extremely common in women (more so than men, surprise, surprise), and having nothing to do with whether you’re overweight or not, most of us have Googled “how to get rid of cellulite” at least once in our lives. But let’s be real: it’s more like five or six searches, and it was on one of them that I stumbled upon a forum of Venus Freeze reviews—most of them glowing, some of them less so.

Venus Freeze is an alternative suggested to people who aren’t candidates for more dramatic options, like CoolSculpting, a more intense treatment that was just cleared by the FDA and is being hailed as the holy grail of non-surgical liposuction technology, but requires your affected area to be above certain measurements. Venus Freeze, on the other hand, is something anyone with enough cash and a spare 30 minutes can have done.

Fully aware that a girl’s got to approach any fat-burning treatment (that doesn’t involve sweating it out at the gym) with a healthy level of skepticism, I decided to try the treatment out at Trifecta Med Spa in New York City, a swanky destination for beauty treatments like botox, fillers, facials, and more.

After a bit of background research, I learned it’s completely risk-free with no downtime, and works using “multi-polar radio frequency and Pulsed Magnetic fields” to heat up the skin. Apparently, the multi-polar radio frequency heats up the tissue to stimulate the body’s natural healing response, stimulating collagen growth to achieve tighter skin, softening of wrinkles and reduced cellulite.

“The number of treatments required will vary patient to patient, but typically, six treatments for the face and six to eight for the neck and body,” explains Zeefah Ali, Trifecta’s manager and a licensed aesthetician. After flicking through a pamphlet of dramatic before-and-after photos, I decided to commit to three sessions, and go from there.

In my first appointment, I stripped down to my underwear for my very own “before” photo (so much cringe) and then changed into the disposable shorts and crop top provided. Next, my aesthetician applied a glycerin gel to my thighs and hips, and used a device that looked similar to an ultrasound machine to massage over the gel in a circular motion. The first five or six minutes were basically heaven, as the machine started heating up and it was exactly like a hot stone massage. From that point on, though, the treatment was pretty uncomfortable.

My technician—who was totally lovely–did regularly ask if it was too hot, and checked the temperature to make sure we weren’t going above what was safe and effective, but I was in a determined mindset that hotter must also mean better, which is how we ended up at the teeth-gritting situation. Each leg was “massaged” for 15 minutes, then the glycerin was wiped off with a warm towel and I was sent on my way, to return again over the following weeks for two more identical treatments.

For the next three or four hours, the skin on my thighs was a bright red—kind of like I’d been sunburnt—but that faded quickly. I had a couple of small bruises on one of my thighs, but they faded fast, too. After the first treatment, I tried to spot a difference, but was disappointed that my thighs looked exactly the same—even though I’d been warned it takes multiple sessions to see results.

After my third appointment, however, I really did notice an improvement: my before and after snaps show a visible smoothing over my hips and thighs, and I’ve lost just under one inch from around my hips—results that Ali explained could become more dramatic with time: “It is not uncommon that patients continue to see an improvement in their skin up to three months after the series of treatments is complete.”

There is one catch though, and it’s not a little one: Venus Freeze costs around $300 per treatment, which is around $1,800 for a full course. So while I found it did everything promised, the results come at a price.

If you’re intrigued, watch this quick video that explains what happens during a treatment.