Let me begin by saying this: I know I’m not fat. I’m not plump, or bulge-y, or any other adjective you might hear in a midnight infomercial aimed at women above a size 0. I’m aware of this fact, and yet, I’m still a human with “problem areas” or whatever you want to call them. I’m a size 2 with love handles, and before you laugh, know that I’ve tried for years (years!) to get rid of them with diet and exercise, with only my ever-shrinking legs getting the memo. (I know, I know: poor me.) But this, apparently, made me an ideal candidate for BTL Vanquish ME (which stands for Max Energy), a new, FDA-approved, non-invasive fat removal treatment that “uses selective radio frequency energy to heat up fat cells to a temperature so hot, they essentially die,” says Dendy Engelman, a dermatologist at Manhattan Dermatology & Cosmetic Surgery. If you’re even one-tenth of a beauty nerd (or have a stubborn-enough midsection), you have to admit: Body contouring sounds pretty cool.

So my love handles and I signed up for the recommended four sessions with Engelman, with each session being roughly a two-hour commitment. My first order of business: taking measurements. I was told I could expect to lose anywhere between two and four inches around my waist, but because I was starting off smaller than the average patient (I measured 36 inches around my hips, 25.5 inches at my waist), I’d probably be on the lower end. (It should also be known that the night before embarking on this lovely experiment, my boyfriend and I had broken up, so my appetite went out the window, leaving no control group in this little experiment. Sorry ‘bout that. Good news is, we’re back together and all is well, thanks for asking.)

MORE: How to Tone Your Butt in 45 Seconds

With all the photos I’ve seen of other body contouring treatments like UltraShape and CoolSculpt, I went into the office half-expecting to see an insane contraption the size of my body (I didn’t do much research before the fact) but was met with this: 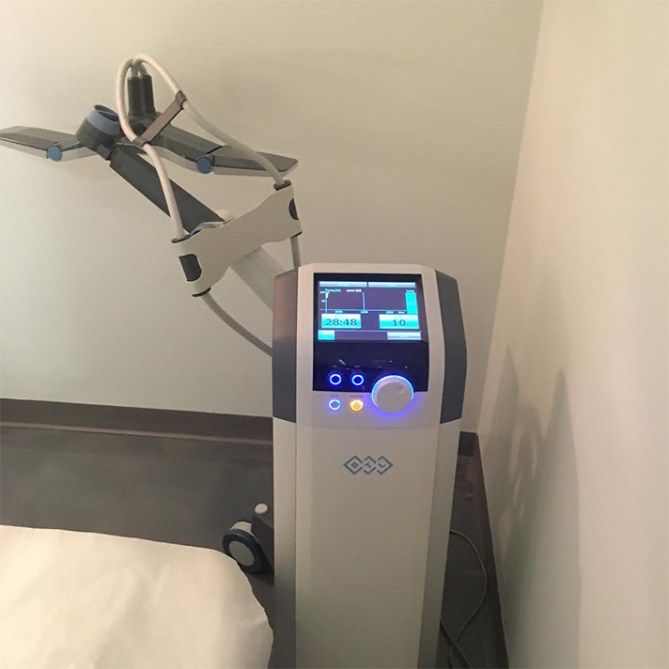 Not so scary, right? While the device, which heats the skin to 101 degrees, and the underlying fat to 120 degrees, is most effective for flanks, the abdomen, love handles, and thighs, the abs “often show the most obvious change in photos,” says Engelman, who recommended I drink a lot of water before and after each session to be sure the radiowave energy is absorbed. David McDaniel, an adjunct professor in the School of Science at Hampton University, who has conducted some Vanquish studies, said not to worry so much about my reflection for a while: “Some patients may initially notice a difference in how clothing fits, more than noticing what they see in the mirror.” I have a pair of vintage Levi’s that I’ve had trouble zippering since 2014, so I was pretty excited and drank my weight in water (about 104 lbs) the previous day. I totally blanked and forgot to take a before photo, but here’s a highly exposed photo of me last year on the beach. I basically looked the same a month ago. See? Not fat, but could use a little toning.

Anyway, after a quick meeting with Engelman about what I could expect (she mentioned my skin would feel warm, and warned me about “hot spots,” a very warm sensation that can occur if the device is positioned too close to the body), the technician had me lie down on a flat bed. It took about five minutes of adjusting the three-paneled machine (one for the front, one on each side) to get it right. And then I just laid there, incredibly anti-climactically (see below). I stayed on my back for two fifteen-minute intervals as the device targeted my abs, and then three fifteen-minute intervals on my stomach, with the device targeting my love handles. I had to turn my cell phone off to keep it from interfering with the treatment, which meant I was alone with my thoughts, but the warm sensation was pretty calming, so I pretty much fell asleep each time. Bonus: The treatment doubles as a meditation session if you really want it to. 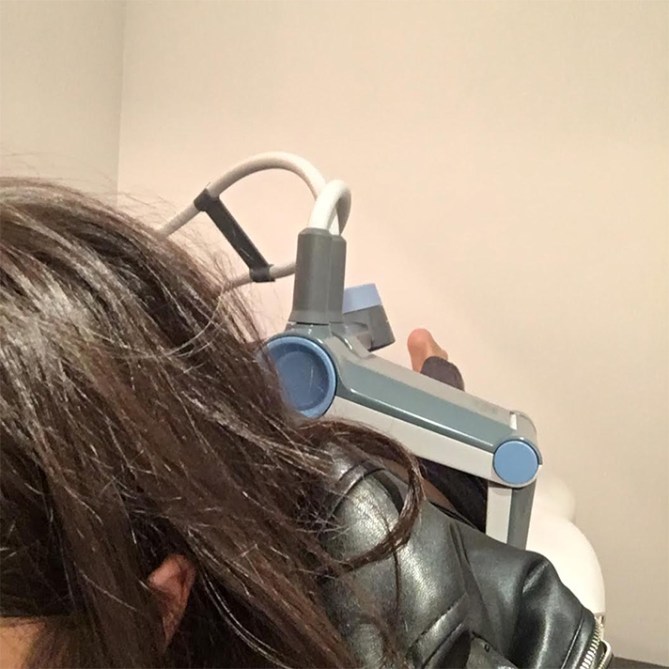 Just as I was told, I came out of the first session feeling totally fine, if not placebo-effect thinner. Oddly, I felt a renewed sense of motivation, as if I didn’t want my hour-long sessions of sitting and doing nothing but sit under a heat lamp go to waste: I not only ate better, but I signed up for approximately one million workout classes, and was generally more cognizant of how my clothes fit. I continued to stay well-hydrated, and went home to put on the jeans. No luck. I still measured exactly the same.

And after my first session, I got to Googling (I know, I probably should have done this first), and I read on what looked like an unreliable forum that some body contouring treatments could make the fat come back with a vengeance. So I emailed Engelman immediately to find out if I just signed up to get fatter. “There’s a known complication exclusively linked to CoolSculpting called Paradoxical adipose hyperplasia (PAH) where fat in the treated area gets larger rather than smaller,” she says, duly scaring the shit out of me.  “This complication risk does not exist with the VanquishME treatment.” McDaniel agreed: “The fat cells that are dead and gone cannot ‘reappear.’” Now that I was in the clear, I signed up for my second treatment exactly one week later. I also started working out a bit more regularly. In the winter, I could go an entire month without putting on a sports bra, but once it gets warmer, I’m a twice-a-week devotee of Taryn Toomey’s The Class, my wallet be damned. I upped it to three times week, because that’s what you do when you go through a breakup.

My second and third sessions, both spaced a week apart, went by without incident—until I got home. I could zip up those Levi’s! I couldn’t really sit or even really move while in them, but they were up. That’s all that mattered. I measured myself and found I lost an inch in my hips, and about half an inch around my waistline. Almost success! I continued to work out, though not excessively, and made sure my diet

My fourth and final treatment, though kind of sad (I really bonded with Terri, the wonderful tech, during my sessions), was equally uneventful. I measured myself right when I got home and saw no difference, but in just over a week, I was 24.5 in my waist and close to 34 inches in my hips—down a full three inches overall. I measured myself three mornings and evenings in a row to see if this was consistent, and even though I was always a tad smaller in the morning (which is normal), I didn’t fluctuate as much as I usually do.

“Results can be appreciated sometimes within weeks, but typically the improvement is gradual and plateaus after a period of months,” McDaniel says, noting that my results are pretty typical. “There is individual variation on the time of response, but it’s a valuable asset in our toolbox for the non-surgical treatment and contouring of abdominal fat and that patients like the short treatment times and the relative comfort of the treatments.”

It’s been about three months since my last treatment, and even though my diet has fallen off a bit, I can still slither into those Levi’s. On a good day (i.e. one that is nowhere near my period), I measure about 25 inches at my waist and waver between 34.5 and 35 inches in my hips. McDaniel was quick to let me know that because my BMI is well within the normal range, my results would likely be less intense than those with some additional inches to lose, but I’m still pretty happy with the results. The price of the treatment varies by practice and is usually set based on the amount of sessions, but if you’re looking for a non-surgical fix after exhausting your lifestyle options, perhaps $2,500 isn’t such a hefty price to pay.

MORE: We Tried It: A Completely Sugar-Free Diet