Considering there are a massive amount of liquid eyeliners on the market, when someone says one is “the best” there is, my ears perk up. Especially when it comes from two of my fave beauty TikTokers Mikayla Nogueira and Rose Siard. This week, they’ve made Valentino’s Twin Liner Gel & Liquid Eyeliner go so viral, that it’s selling out in real-time. There’s a good reason for this. Sure, the eyeliner really is great (I’ve tried it) but it’s also trusting these two to never lead us astray.

I follow both women but Nogueira’s video came up on my FYP first. She was talking about Siard, saying how much she trusts her and how “every recommendation she makes is spot-f*cking on.” Basically, because Siard loves Valentino’s Twin Liner so much, and mentions it in a few of her videos, Nogueira ran out and bought two of them, both in black. She quickly tests the first one by creating a classic cat-eye.

“Holy shit,” she says. “OK, Rose, I get it. I f*cking get it. This is black as hell, there’s about a zero percent chance of it bleeding, it glides precise.” She says even the pencil liner on the other side is “amazing.” 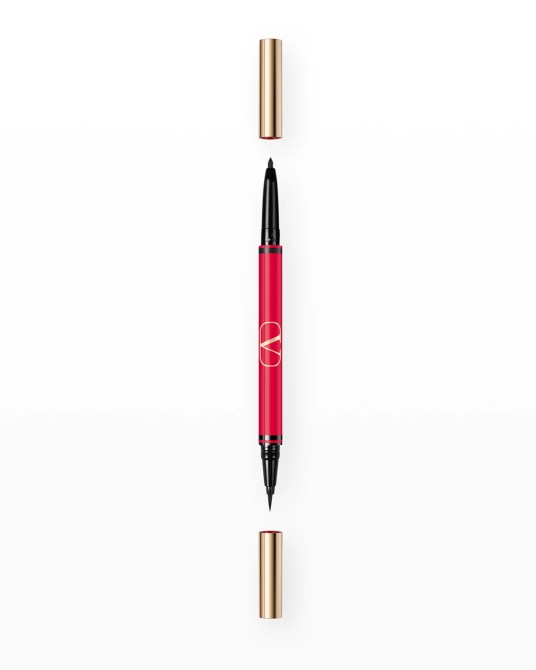 Yes, the other side. Though this liner is pricey, you basically get two for one. It’s a double-ended eyeliner with ultra-pigmented color and a 16-hour wear. There’s a semi-matte liquid liner on one side and a smooth gel eyeliner on the other side. Like Nogueira said, there’s no bleeding, running or smudging.

Because of the hype, Twin Liner sold out at Sephora in all shades. (There’s a mix of black, brown, navy blue and red.) But we found colors available at Bloomingdale’s and Neiman Marcus — for now. You might not want to wait on this.