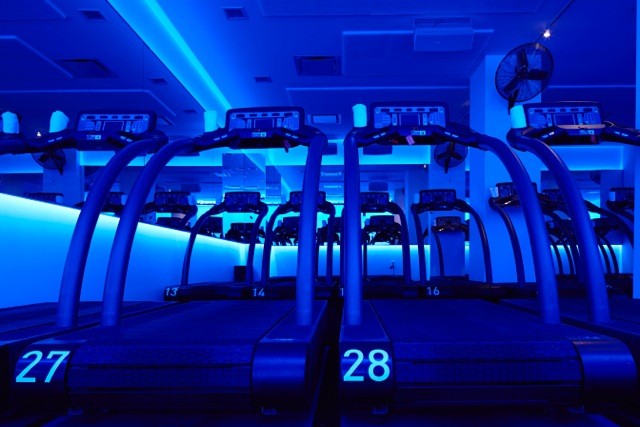 The treadmill has long been known as the last resort of the gym. Workout class enthusiasts try anything from zumba to barre to avoid the dullness of machine cardio. Runners endure the elements over less-than-stimulating treadmill runs. So when we heard that New York was home to an incredibly popular treadmill class, we were curious—and intrigued. Could treadmill classes be the new spinning?

While treadmill classes have been available for years (as early as 2006 at Crunch gym), it’s only recently that they’ve really taken off. With the launch of fabulous New York-based Mile High Run Club, the first studio to solely provide treadmill classes, they’re now getting lines-out-the-door notice. Devoted spinners (and cross fitters) attend multiple classes a week because it’s good for their health, yes, but also because it’s a passion. Will a running-only studio gain the same kind of commitment?

“A good 79 percent of the people [who come into our studio] are repeats, and we’ve only been open for four months, says Deborah Warner, the founder of Mile High Run Club. “I see people come multiple times per week.”

The immediate success of the Mile High Run Club can be attributed to the class’ perks for both runners and non-runners alike. Runners have the opportunity to join a community (even if just for one hour) and partake in an intense workout that may be impossible to do solo. The non-runners are given instruction and shown that running can be stimulating and—dare we say?—fun.

“There are a lot of non-runners who are intimidated by running, but want to try it,” says Warner. Not only is each class beginner-friendly, but they eliminate neophyte’s primary concerns. “They’re not exposed outside, no one’s watching them and they don’t have to keep up with a pack.” They can move at their own pace on the treadmill without anyone knowing how fast they’re going. Similar to spinning, the class’ instructor is an experienced runner who acts as a coach, providing tips on form beginners can use on a track or road run too.

Also similar to spinning, the classes incorporate low lights and loud music, providing that pump-you-up dance club setting. Participants are led through intervals (both speed and hills) as well as core and arm strength training for a balanced workout. While the core and arm specifically target running form and speed, they’re beneficial for the non-racer as well.

“People like to follow the new thing, especially in New York,” says Warner. “We’ve seen many people who have found that they’ve been avoiding running for all these years, and they actually like it now.”

For the experienced runners, treadmill classes offer an opportunity to run without being exposed to extreme conditions, as well as providing motivation and community. “With the winters getting colder and the summer’s getting hotter, there’s certainly a demand for these classes because the extremes are so hard to tackle,” says Cheri Fogleman, a Master Coach and Marathoner at CLAY Health Club and Spa who’s been teaching treadmill classes for seven years. This past January, she had an ultra-marathoner coming consistently for part of his training because it was too cold for him to run outside.

Running is a lonely sport, and while workout classes have always been a way to exercise with a community, they were traditionally considered an off-day from race training. Treadmill classes bring that community aspect to running, providing motivation from both the community and the coach. “I’ll say mantras in class, like drop your shoulders down, stand tall, feel like you’re effortlessly being pulled forward, etc.,” says Fogleman.

With the growing popularity of running in general, treadmill classes seem like the natural progression. “According to the organizers of running events all over the country, more and more people are entering these races every year,” says Warner. “And culturally there’s a wave of more races every year [both traditional and obstacle or theme races].” This new breed of race turns running from a chore to a passion, and the means to a fun end. Whether you’re preparing for a color run or your first half marathon, treadmill classes are the perfect addition to your fitness routine.

And if you’ve always hated running, maybe it’s time you understand how the other half lives.

Read more: The Lazy Girl’s Guide to Training for a Half Marathon