Drop everything: The shades for Too Faced’s Born This Way Foundation are finally in. A few months ago when Jackie Aina announced she was partnering with Too Faced to create a shade-diverse foundation collection, we immediately started saving up. And now that we see the range of 35 shades, we’re telling you to put aside money too.

The shot of foundation shades was leaked by Twitter user @cocoaswatches after they received a press release. Although there’s still no clear release date, the medium-to-full-coverage foundation has people damn excited. 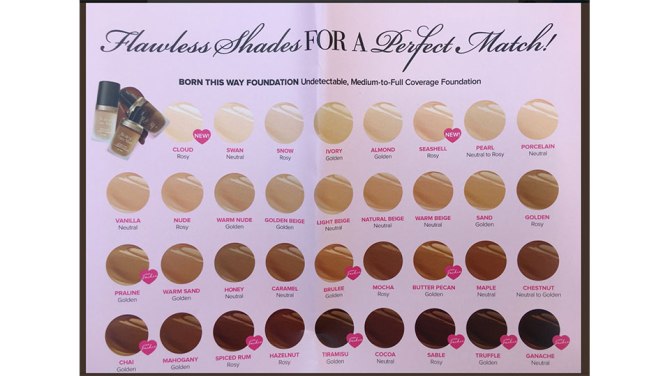 MORE: How You Can Get Early Access to Pat McGrath’s New Highlighter Palette

However, as giddy as most are, there are still drawbacks to the collection. Aside from people wondering about the lack of cool and peachy undertones, there’s also a good deal questioning as to why most darker shades are named after food, and why a lighter shade is named “nude.” All of the aforementioned problems are not new in the beauty industry, but as @cocoaswatches replied, “it sucks that it’s [the discussion of flaws] at the expense of a black woman trying to change things for us.”

At the end of the day, there’s still a lot to be excited about for this collection. Now, if we could only get a drop date!

Beauty companies are finally acknowledging the importance of shade diversity. So much so, that fan favorite Too Faced, has enacted the saying “better late than never” by teaming up with seasoned beauty blogger, Jackie Aina, to extend the range of their already established Born This Way Foundation.

MORE: 20 Under-$20 Foundations for Coverage That Lasts

Aina has long been a proponent of diversity in beauty, making her the perfect person to assure other WoC are taken care of this time around. Last month when Tarte missed the mark with their Shape Tape Foundation, she made a “I Don’t See Color” video in response to people asking why there was such outrage to the lack of inclusion.

In the video, she applied makeup under a black and white filter to later reveal she used all the wrong shades/color combinations, clearly demonstrating that color indeed makes a difference.

Her most recent clip, titled “Get Glam With Me,” is where she showed off one of her new shades from the Too Faced collaboration. When it came time to apply foundation she said “I can’t show you the foundation that I’m using—well, technically I can…” and then held it up to the camera. That’s when she let the secret out saying, “It’s Too Faced Born This Way. BUT it’s my new shade — that I created!”

As she applied the new foundation, she commented on how now it’s a foundation she’ll actually wear, instead of one she would’ve if she “really wanted to make it work.” She continued, “[It’s a] new shade for golden realness, it does exactly what I want it to. Perfect amount of coverage, let’s my skin breathe. I wouldn’t change a single thing about formula finish, up until recently I would’ve changed the colors, but we’ve solved that mystery.”

She didn’t say any specific dates, besides “soon, soon, soon,” and also didn’t elaborate on the different shades she’s created. But with her knowledge of darker skin tones, we know they’re going to be killer. We can’t wait.